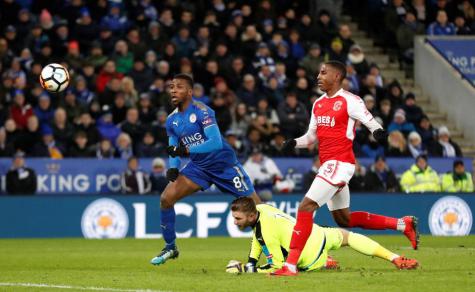 Remember the name, because this will probably be a pub quiz question for years to come

Listen up now folks, because this could very well win you half a pint in a pub quiz one day.

Kelechi Iheanacho – who scored both of Leicester’s goals in their 2-0 win over Fleetwood in the FA Cup third round replay this evening – has become the first player in English football to be awarded a goal thanks to the use of VAR.

On the 78th minute at the King Power stadium, the Nigerian was put through on goal thanks to a lovely pass by Riyad Mahrez.

The former Manchester City striker – who timed his run perfectly between Fleetwood’s defenders – latched onto the ball and chipped it over the goalkeeper, only for the linesman to raise his offside flag.

The referee then did that funny little square sign thing and the VAR was consulted – and the lineman’s decision was overruled.

As you can see, the Leicester man’s back foot was level with defender Nathan Pond.

It’s onside, but by the finest margin – and you’ve gotta feel a little bad for the assistant, as it was such a tight call.

What’s particularly interesting is that referee John Moss didn’t even have to view the replay, as the decision was made for him by the video assistant.

And if you fancy a bonus point, Iheanacho was also the first ever fourth substitute in the FA Cup.