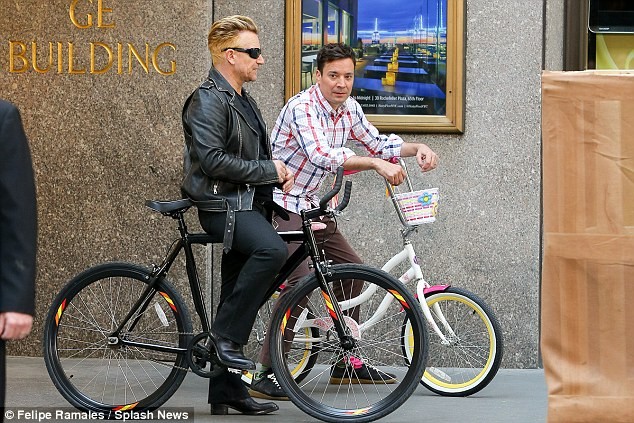 Earlier today, Timberlake posted a hilarious video on his Instagram, which is sure to leave you smiling and also wanting a tandem bike, like, right now.

In the video, it looks like he’s biking alone at first and looking around at the idyllic scenery of the Hamptons area in New York. The “Can’t Stop the Music” singer happily says to the camera, “God! Just biking through the Hamptons. It’s so beautiful.” And that’s when we see what (or who) is behind him…

Turns out, Jessica Biel‘s main man isn’t on the bike by himself!

The music maker is actually on a tandem bike with his late-night bestie, who yells, “Bro-biking!” to the camera. Timberlake then follows suit as the two continue to bike through the ritzy Long Island neighborhood as bros who bro-bike do.

Along with the hilarious video, Timberlake wrote,  “Bro-biking. @jimmyfallon #memorialdayweekend.”

This isn’t actually the first time that the two have joined forces atop the two-seater, which was actually a gift to Fallon from his wife, Nancy Juvonen.

In October 2016, the two pals, who are also known for their History of Rap collaborations, teamed up on the Tonight Show to play a game called Best Friends Challenge. According to Fallon, the rules of the game are, “You draw a question from the Best Friend Box and the other person guesses how they think you would answer that question.” Sounds hard, but when you are BFFs like Fallon and Timberlake, it’s pretty simple.

The first question of the game was, “What is our preferred mode of transportation when we hanging out outside of the show?”

The “Mirrors” hit-maker and the late-night host couldn’t stop giggling when the two revealed their answers at the same time: tandem bike.

While Fallon explained to the audience that the friends really did ride the tandem bike together, Timberlake proposed that the pals of them make a show about their adventures on the tandem bicycle. Suddenly, Timberlake blurted out “bro-biking” and thus the genius idea was born!

We hadn’t heard anything more about their bro-biking adventures, that is until now. Looks like they took that idea and ran with it, or rolled with it…