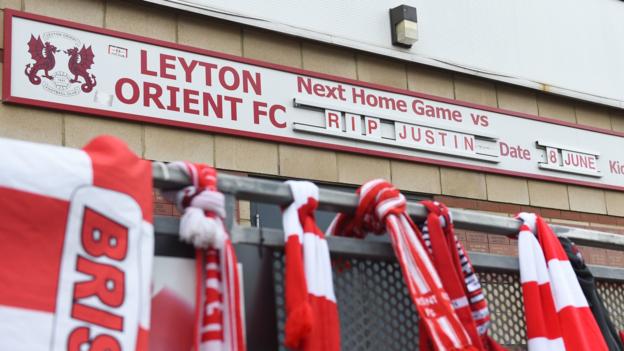 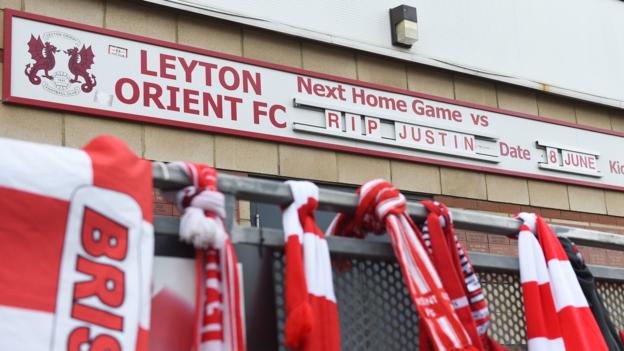 Leyton Orient captain Jobi McAnuff says players and fans sharing their grief over the death of boss Justin Edinburgh can help them deal with their loss.

McAnuff, as well as some more of the club’s players, joined fans at Orient’s Brisbane Road ground to mourn Edinburgh on Sunday.

“Obviously we wanted to pay our respects and we felt compelled to go down,” McAnuff told BBC Radio 5 Live.

“It was a really emotionally tough afternoon.

“It is somewhere we’ve had such great experiences recently – we were training, getting ready for the [FA Trophy] final and winning the league and such highs and then going back, there’s a real sombre sadness around the place. You couldn’t get two more opposite sets of emotions.

“To grieve is part of the process and a little step in trying to deal with it.”

Floral tributes, signed football shirts and scarves were left as a mark of respect as both home supporters and fans from other clubs marked a solemn day for the east London club.

As a player, Edinburgh twice won the FA Cup with Tottenham Hotspur and later went on to manage Northampton Town, Gillingham and Newport County before moving to Orient in November 2017.

Edinburgh oversaw a successful 2018-19 season for Orient which saw them win promotion to EFL League Two after winning the National League title, while they also reached the final of the FA Trophy.

“Every manager has their different qualities, they might be tactically great [for example] but Justin was an all round top guy who people gravitated towards and people wanted to do their best for,” McAnuff added.

“He would not accept less than people giving 100% and told us not to let opportunities go by.

“You just never know when you’re going to get another chance and that’s certainly taken a deeper meaning now and it’s something I and the lads will use moving forward to drive us on.”