Wowplus
Home Sports Football Jurgen Klopp: ‘Premier League will be a race to the final day’ 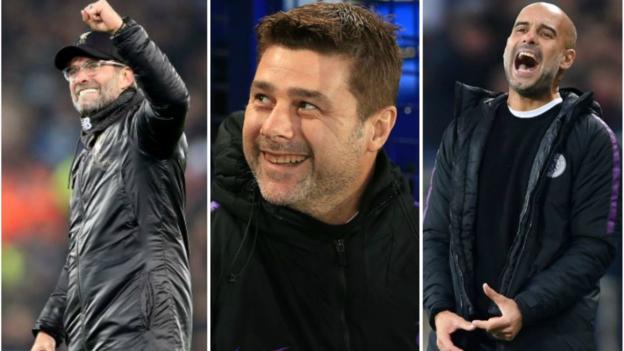 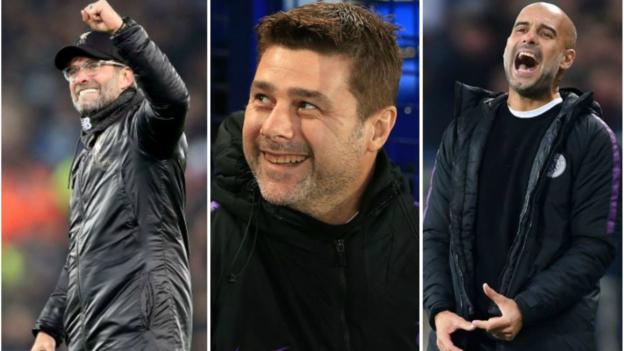 It’s advantage Liverpool at the halfway stage of the Premier League title race.

While champions Manchester City were tripping up 2-1 at Leicester City, Jurgen Klopp’s Reds were thrashing Newcastle United 4-0 at Anfield to open up a six-point lead at the top of the table.

At the same time, Mauricio Pochettino’s Tottenham made it 11 goals in two games with a thumping 5-0 win over Bournemouth.

So, Liverpool are flying, Spurs have crept up to second and City have seemingly gone off the boil.

But what are the managers saying about the race for the title?

Liverpool on fire – will they stay at the top?

Seven points separate the top three, but despite his side’s six-point cushion at the top, Liverpool boss Klopp expects the race for the title to go down to the wire.

“We had no idea about the Manchester City result until after the game,” the German told Match of the Day after his side’s comprehensive 4-0 win over Newcastle thanks to goals from Dejan Lovren, Mohamed Salah, Xherdan Shaqiri and substitute Fabinho.

“We play City soon – if I was them I would think there is only four points because we still have to play them, then we play Arsenal before then as well.

“The only thing that matters to us is the performance and keeping that level of performance. It’s good but that’s all. Tottenham are flying – they had a difficult summer but they are doing brilliant.

“We are on a good run as well. Chelsea will win, Arsenal will win – it will be a race until the final day.

“But we are in it and that’s important. We’re just creating a basis for the rest of the season, and the basis after the first part of the season is obviously a good one.”

Liverpool are averaging 2.68 points per game.

At this rate, they could end the season with 102 points – two more than champions City managed when they became the first team to reach 100 last season.

Will title race go down to the wire?

This is rare territory for Liverpool.

Only once in the past 10 seasons have they gone into a new calendar year at the top – in 2008-09 when they eventually finished four points behind champions Manchester United.

Phil Neville, a six-time Premier League winner with Manchester United, speaking on Match of the Day: “I think Liverpool will win the league, I really do. They are that powerful, with that squad size. The goalkeeper and Virgil van Dijk have been incredible signings.”

Former Liverpool midfielder Danny Murphy, speaking on Match of the Day: “One of the best things I have seen for a number of years is the happiness of Liverpool’s squad, and they all want to play for Jurgen Klopp.

“The defensive aspect is the biggest difference this season. Virgil van Dijk is the best defender in Europe and the goalkeeper is solid. They are playing with a lot of confidence and they can win ugly.”

Five Premier League wins in a row, 11 goals in two games, and above City in the table – Spurs reach the midway part of the season in rude health.

Yet Pochettino says Liverpool and City “are the real contenders” for the Premier League, despite his side thrashing Bournemouth to go second in the table.

“It is one thing to be a point above them, but Manchester City are the reigning champions and Liverpool are doing fantastic,” said the Argentine.

“We are in a very good position, but Liverpool and Manchester City are the real contenders. We are between them and there is still a lot of work to do.”

Spurs have been above Manchester City this late into a season as recently as 2016-17, Guardiola’s first campaign in charge at the Etihad, when they finished runners-up to Chelsea – eight points above third-placed City.

And this is, by some distance, their best points haul after the first 19 games under Pochettino.

Tottenham are just 19 points short of the 64 they managed throughout the whole of the 2014-15 season – Pochettino’s first at the club – when they finished fifth.

Phil Neville, speaking on Match of the Day: “Tottenham have a brilliant manager, are brilliantly coached, a great set of players and are playing full of confidence.

“Harry Kane is the best striker in the world at this moment in time and Tottenham have one of the best passers in the league in Christian Eriksen.”

After 19 games last season Manchester City were 13 points ahead of their nearest rivals at the top of the table.

Now they find themselves down to third – seven points behind leaders Liverpool – after three defeats in four games, with one clean sheet in the past nine top-flight games.

No wonder boss Guardiola admits he is ‘worried’ after back-to-back Premier League defeats for the first time since December 2016.

“Now there will be doubts but we have to change the dynamic,” said Guardiola after his side followed up a surprise 3-2 defeat at home to Crystal Palace with a 2-1 loss at Leicester City.

“Of course we are worried [about not keeping clean sheets], the result is what counts, we lost.

“We are together, we will work harder and we will come back with some good results. The season is very long and we have lots to fight for.”

City have already lost one more game in the first 19 matches of this season than in 38 last term.

Yet their current tally of 44 points would have been enough for them to top the table at this stage of the campaign in five of the last 10 seasons.

“We have made an incredible amount of points at this stage and if we can get the same, or more, in the second half of the season then we are fighting to win the championship,” added Guardiola.

“But at the moment, the reality is that two more teams are better than us.”

Phil Neville, speaking on Match of the Day: “Manchester City are not playing with the same intensity or speed.

“They concede less, score more and win more games when he is there – he is irreplaceable for them. They have two players in every position apart from that one.”