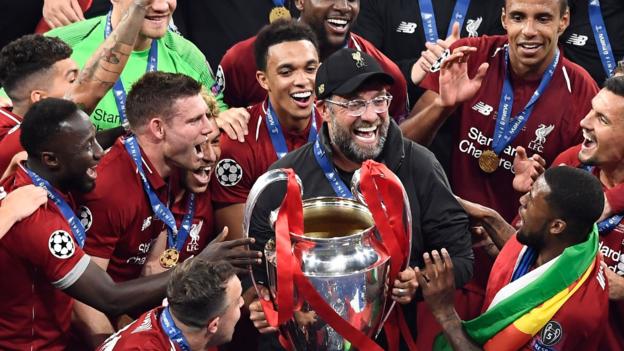 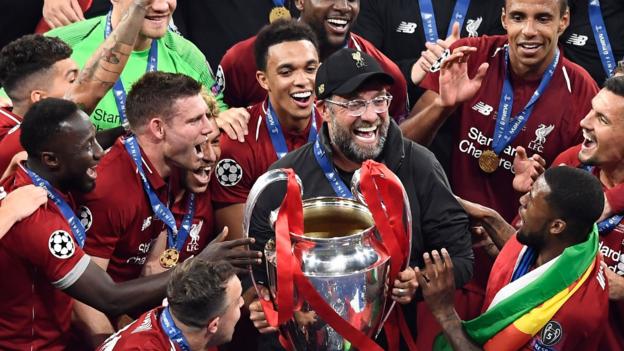 Liverpool manager Jurgen Klopp has said winning the Champions League is the “best night of our professional lives”.

The Reds beat Tottenham 2-0 in Madrid thanks to an early Mohamed Salah penalty and a late Divock Origi strike.

It is their first major trophy since Klopp arrived at Anfield in 2015.

“Did you ever see a team like this, fighting with no fuel in the tank? I am so happy for the boys, all these people and my family. They suffer for me, they deserve it more than anybody,” he said.

“It was an intense season with the most beautiful finish I ever could have imagined.”

Liverpool, who lost last season’s final to Real Madrid, finished on 97 points in this season’s Premier League, but finished second to Manchester City.

The German arrived at the post-match news conference holding a beer. “We’ll celebrate together, we’ll have a sensational night,” he said.

“I feel mostly relief, relief for my family. The last six times we flew on holiday with only a silver medal it didn’t feel too cool.

“Tonight was a big challenge for both teams to deal with the three weeks with no game. The final is about the result and tonight the boys showed the resilience we needed. I don’t want to explain why we won it, I only want to enjoy that we won it.”

The team’s title parade around their home city starts at 16:00 BST on Sunday.

“Tonight is really emotional, but I’m much calmer than I thought,” said Klopp.

“It wasn’t important for me to touch the cup. I loved seeing the boys having it and seeing some faces in the crowd. Going to Liverpool tomorrow with something to celebrate is big and I’m really looking forward to that.”

‘The best moment of my life’

Captain Jordan Henderson paid tribute to Klopp. “Without this manager this is impossible,” he told BT Sport. “You go through tough times in a season, but what he has done since coming in is unbelievable.

“There’s such a togetherness, he has created a special dressing room – all the praise goes to the manager. I’m so proud to be a part of this football club and to cap it with this is so special to me.”

The midfielder, who has been at Liverpool since 2011, also captained the Reds in last season’s final loss to Real.

“I just try to give my best every time I play football and to help my team no matter what,” he said. “I’ve had tough times but I’ve kept going – just as this club has.

“It’s the best moment of my life. This is what I dreamed of since I was a kid.

“It’s not about me, it’s not about me being captain or lifting the trophy, it’s about this club, these players, this manager. Now we must keep going and kick on.”

‘We deserved it more than any other team’

Right-back Trent Alexander-Arnold – who set up 16 goals in all competitions this season – became the first player under the age of 21 to appear in consecutive Champions League finals.

The 20-year-old England international said: “I am just a normal lad from Liverpool whose dream has just come true.

“It is hard to put into words. The season we have had, we deserved it more than any other team. We have done something special, we dominated the game.

“We will not look back and think it was a sluggish game, we will see we are European champions.”

Salah enjoyed a much better final than last year, when he went off injured following a clash with Sergio Ramos.

This time, his second-minute penalty – which made him the fifth African to score in a European Cup final – put the Reds on the way to victory.

“Everyone is happy now,” he said. “I am glad to play the second final in a row and play 90 minutes finally. Everyone did his best today – no great individual performances today, all the team was unbelievable.

“I have sacrificed a lot for my career, to come from a village to go to Cairo, and to be an Egyptian at this level is unbelievable for me.”