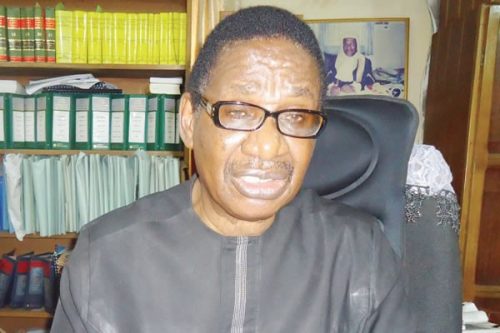 Two legal icons, professors Itse Sagay and Akin Oyebode on Wednesday expressed regret over the current state of the Nigerian judiciary and its attitude towards the fight against corruption.

While Sagay, a Senior Advocate of Nigeria, said the judiciary was hostile to the fight against corruption and needed to be brought on board in the war, Oyebode said the third arm of government needed redemption because of it transgression.

Sagay said the judiciary must desist from engaging in espirit de corps with corrupt judges.

He said corruption on the bench was tantamount to crimes against humanity, calling on upright judges to come hard on their corrupt colleagues and see them as destroyers of the institution.

Sagay and Oyebode spoke on Wednesday on the sidelines of a three-day conference on ‘Promoting International Cooperation in Combating Illicit Financial Flows and Enhancing Asset Recovery to Foster Sustainable Development.’

The event, which held at the Banquet Hall of the Presidential Villa in Abuja, started on Monday and ended on Wednesday.

Sagay said, “This decision by the NJC that judges who were arrested, and those who are on trial like Ademola, whose case is a life case, and others who have not been charged, but are going to be charged, calling them back is for me a sign of hostility to the fight against corruption.

“We cannot afford the judicial hierarchy to engage in espirit de corps with members of their group that are falling in the corruption struggle.

“They must join the executive whose mantra is total or near elimination of corruption for the sake of the survival of this country.

“Judges have a duty to join in this determination.

“So, that sort of decision that was taken gives the impression that they are hostile to the struggle.

“That’s one reason why I said they’re not on board.”

He said in his view, the judiciary remained the highest among the three arms of government due to his adjudicatory roles.

The don said by virtue of such roles conferred on the judiciary, any judge guilty of corruption was guilty of crimes against humanity.

Sagay said, “The judiciary, in my view, is the highest of the three arms of government.

“They are the only ones who adjudicate the disagreement between the other two. If you look at the set-up of the court they sit high above others and everybody is looking up at them.

“The rest of us apply, move, plead and they decide, and there’s no democracy about their decision.

“Their decision is binding. Calling them my lord is not an accident. After God, members of that group are the smaller lords.

“When you descend from that level and come into the mud to join in looting and accepting money from lawyers who have no name to protect, you join them in wallowing in corruption, the judicial hierarchy, the clean ones should come down hard, harder than the poor man who is sentenced everyday for stealing a goat.

“The judge who is guilty of corruption is almost guilty of a crime against humanity, because what he is doing is to undermine the whole integrity of the state. It means that when we have a major issue that can affect the future of the country, we can’t go to him, because he’s dishonest, he lacks integrity and is fraudulent and will not decide the case according to the justice of it.

“So it’s a very dangerous thing that is happening now and the judges must embrace the fight against corruption otherwise this country has no future.”

On his part, Oyebode, a Professor of International Law and Jurisprudence, described the judiciary as a custodian of due process and rule of law.

Backing Sagay’s view, Oyebode recalled the days when there used to be great judges who would never compromise their positions.

Oyebode said the judiciary of nowadays “seeks redemption because of its transgression.”

He said, “Prof Sagay many years ago wrote a book saluting the Supreme Court in terms of the judgment they handed down and the effervescence of the judiciary under the leadership of people like Kayode Eso, Chukwudifu Oputa and other distinguished jurists. They gave a testament to posterity. But since then a lot of water has passed under the bridge. There has been some misfits appointed into the judiciary – those who have abused or compromised their high judicial office.

“The judiciary is the custodian of due process and rule of law, and if gold rusts, what should iron do?

“…I think the judiciary now seeks redemption because of its transgression.

“We just have to wish them well and hope that a greater day lies ahead for judges in contemporary times.”