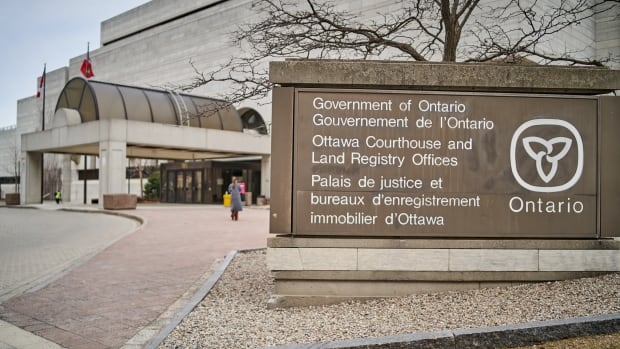 A judges’ secretary was fired from her job and pleaded guilty to obstruction of justice after she looked at a wiretap warrant — only to find out her own fiancé was a target in a murder probe and their shared home had been bugged.

The case of Samantha Lewis reveals not just the lengths Ottawa prosecutors went to protect an investigation from inside the walls of the Elgin Street courthouse, but it also reveals new details about a cold case homicide probe. That probe has, to date, not resulted in any murder charges against a group of men detectives once believed to be responsible for two city homicides.

Ottawa police homicide detectives launched Project Game in February 2021, Crown prosecutor Simon Heeney told an Ottawa courtroom on June 15 of this year, according to a court recording of that day’s proceedings obtained by CBC News.

Heeney, an out-of-town prosecutor, was brought in to try the case because of “some of the players” involved, he told court when he identified himself.

The project was one focused on historical unsolved homicides, with the “primary focus on two homicides in 2018,” Heeney said, both believed by police to have been committed by the same group of people in Ottawa.

No charges against Mohamed have been laid in connection to the project.

In 2014, in an unrelated case, he was charged with human trafficking offences in Newmarket, Ont.

The permission by a judge to intercept private communications and breach what are otherwise the constitutionally held rights of any targets is only good for 60 days.

During those first 60 days, Heeney told court, police determined that Samantha Lewis was Mohamed’s fiancée, and that she worked at the Superior Court of Justice as a judicial secretary.

A wiretap can only be authorized by a Superior Court judge and with Lewis working directly in those chambers, police and prosecutors had to devise a way to protect their investigation.

Homicide investigator Det. Chris Benson notified Crown attorney Brian Holowka about Lewis’s employment, her relationship with a target and that there was no information police had collected to suggest she was involved in criminal activity, Heeney told the court.

Holowka then met with Justice Calum Macleod, a regional senior judge of the superior court, “to mitigate any compromise to the investigation” and to prevent Lewis from being exposed to the workings of the case, Heeney said.

In June 2021, police applied for a second wire for another 60 days. This time, police identified Lewis as an “other known person” whose communications might be intercepted by virtue of her relationship with the target. It was granted.

On June 4, police made an “authorized covert entry” into the Muscari Street townhome shared by Lewis and Mohamed and installed a listening device.

A snag in the plans

Another 60 days was nearing completion when Justice Smith granted a third wiretap authorization on July 30. But an error in that order meant police had to fix a typo before returning the amended forms back to Smith, Heeney told court.

Prosecutor Carl Lem wasn’t available to carry out the plan to bypass Lewis. The documents were given to another prosecutor Mark Holmes, who was unaware of the complications in the case.

He went to judges’ chambers at 12:40 p.m. on Aug. 5, looked for someone at the counter, handed the envelope to an employee and requested she deliver it to Justice Smith.

The employee was Samantha Lewis.

The trouble, though, was that there were two Justice Smiths at the Ottawa Superior Court of Justice.

She needed to know where to deliver the envelope.

“Surveillance video revealed that Ms. Lewis took the envelope and returned to her desk, where she was observed removing the contents of the envelope, then quickly reviewing it and then placing contents back and walking out of camera view where she delivered it as intended.”

The video evidence is clear that she viewed the cover sheet of the wire application for no more than 60 seconds — but when she did, she saw her own name and that of her fiancé.

Heeney called the circumstances that led to her discovery of the police investigation “inadvertent and accidental.”

‘You’re getting me in trouble’

It was what happened next that was the basis of the charge that led to her conviction.

“Ms. Lewis was observed returning to her desk and texting messages on her cellular device,” Heeney said.

But police had been intercepting some of her communications. Monitors in the Ottawa police wire room notified investigators that Lewis was sending messages that suggested she had seen the authorization.

At 2:18 p.m. Mohamed was caught on the wire telling another person whose identity wasn’t revealed in court that Lewis messaged about learning something bad at work and he needed to be home when she got there.

Following the disclosure of the wiretap, the communications intercepted … largely came to an end.– Simon Heeney, prosecutor

At 4:28 p.m., Lewis arrived home from work and then immediately asked Mohamed where his phone was and told him to turn it off.

The home, though, was already bugged.

As they left the townhouse, the last words caught on tape: “What I’m about to tell you, I shouldn’t know this information …”

A few hours later, the audio probe heard them back in the house fighting, Heeney told court.

“You’re getting me in trouble and ruining my life and ruining everything I worked for,” Lewis told her fiancé,

She told him he was destroying her life and her family and to “pack your shit and leave.”

“I saw ‘Yasin Mohamed’ and my heart fell out of my head,” she said on the audio recording.

“I saw my name,” she said, and the address on Muscari.

Police later intercepted Mohamed communicating with “some other males,” informing them of the police investigation and the wire. Their identities were not revealed in court.

It was a very difficult situation and she reacted somewhat impulsively.– Michael Spratt, defence lawyer

The same month, after Lewis’s disclosure of the wiretap, police appealed to the public for help solving cold cases and highlighted only the evidentiary shortcomings in the 2018 slayings of Tarek Dakhil and Yonis Barkhadle.

“Following the disclosure of the wiretap, the communications intercepted … largely came to an end,” Heeney said.

Lewis didn’t communicate any substantive parts of the investigation or counsel Mohamed to destroy evidence, Heeney said. But she also didn’t report what she had done to her superiors.

Police knew what was happening in real time but arrested Lewis on Sept. 10, 2021 and released her on a promise to appear.

A CBC reporter’s request for the information — a public document held by the court that lists charges and the allegations against an accused — in Lewis’s case that was sent on April 29 of this year went unanswered by court staff for almost two months. Unprompted, staff sent the requested information on June 27 — 12 days after Lewis pleaded guilty and the resolution of the case.

I agree with what my lawyer has said, the only thing I would like to say is that I’m truly sorry.– Samantha Lewis

That resolution saw prosecutor Heeney and Lewis’s defence lawyer Michael Spratt jointly ask for a conditional discharge that would see Lewis spared a criminal record after a year of probation. A condition of her discharge is that she not seek or maintain employment in the justice sector.

Lewis, now 30, was first hired by the Ministry of the Attorney General in 2018. She worked initially as a court reporter, taking notes and recording court proceedings. Less than a year later she became a judicial secretary, passing a security clearance and taking an oath of office that she would not disclose any of the information that came to her knowledge in the role. Lewis was working in judges’ chambers at the Superior Court of Justice at the Ottawa courthouse in the spring and summer of 2021.

“This sort of offence strikes right at the core of the administration of justice but on the other hand you’ve got a youthful offender with no criminal record who arrives at this by accident  and sees her own name,” Heeney said.

Heeney said the wiretap had made just “modest progress” on the cold cases by the time it had been compromised.

Spratt told court his client had never been arrested or even pulled over and had led a pro-social life.

“It was a very difficult situation and she reacted somewhat impulsively,” Spratt said.

“She does recognize … that she should have conducted herself differently and that she made an error in judgment.”

Lewis addressed court directly: “I agree with what my lawyer has said, the only thing I would like to say is that I’m truly sorry.”

“I believe you when you express your remorse … You realized you were in way over your head. The person you thought you knew probably wasn’t the person you knew,” he said.

“What Mr. Mohamed’s level of involvement was, if any, we’ll never know, probably, at this stage. It was pure happenstance that you were there to take that envelope from the Crown attorney that day.”

Maybe this is a life lesson you will carry with you to the grave.-Justice Michael March

March said Lewis was likely shocked and alarmed, and her survival instinct kicked in.

“Human nature took over. And you did what you did. But you knew it was wrong. And it was criminal.”

Lewis also made a $500 donation to a collaborative justice program. Heeney withdrew a single count of breach of trust against Lewis after the plea.

“Maybe this is a life lesson you will carry with you to the grave,” March told her.

The Ministry of the Attorney General declined to comment on the case or explain when Lewis was terminated.

“The ministry does not comment on human resources matters, as all employment matters relating to current or former employees are confidential,” according to a statement by a spokesperson.

The homicides of Tarek Dakhil and Yonis Barkhadle remain unsolved.