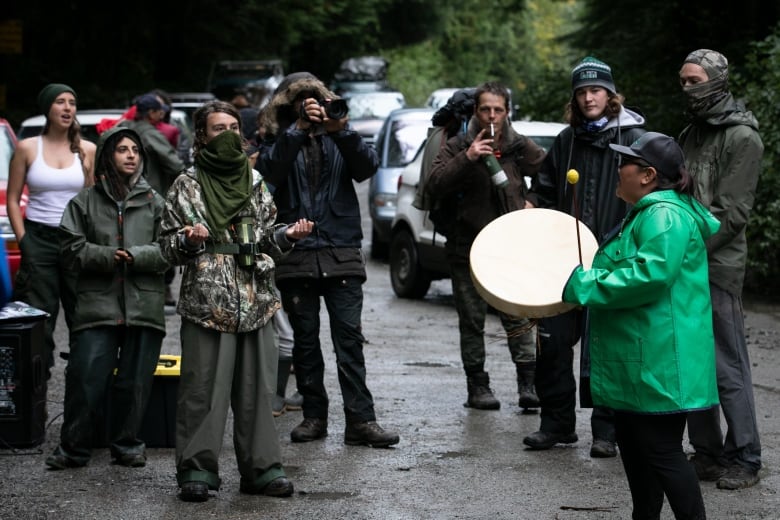 A B.C. Court of Appeal judge has granted a temporary injunction at a logging site on southern Vancouver Island, where protesters, police and loggers have been at odds for more than a year.

Madam Justice Sunni Stromberg-Stein cited the potential economic harm to Teal Jones if there were no injunction in place as the reason for her decision Friday afternoon.

Lawyers for Teal Jones appeared in court Friday to argue for an interim injunction against old-growth logging blockades on southern Vancouver Island, while the company appeals a Supreme Court decision last week that put an end to its original injunction.

In September, B.C. Supreme Court Justice Douglas Thompson denied an application to extend an injunction against old-growth logging blockades at Fairy Creek, which had been in place since April, saying the actions of RCMP officers put the court’s reputation at risk and infringed on civil liberties.

Teal Jones appealed that decision within days, but its lawyers said Friday the company needs an interim injunction in place while the appeal goes through the courts to avoid “irreparable harm.”

Lawyer Dean Dalke said the company needs urgent access to the area so workers can winterize roads to prevent washouts, harvest $1.27 million worth of felled timber before it deteriorates in the bush, and harvest additional timber to keep its mills running and avoid job losses before it’s “too late.”

Dalke said blockades have “proliferated” since the RCMP left the area at the end of September.

“The police have made incredible progress toward the end of the injunction in dismantling the blockades and much of that work now has been put back, and put back to zero in some cases,” Dalke told the court.

Dalke said police would return to the area and restart enforcement if an interim injunction were granted.

“Which is really the only hope for Teal Cedar to avoid irreparable harm, pending the appeal,” the lawyer added.

But Matthew Nefstead, representing members of the Rainforest Flying Squad, said police remain in the area even after the injunction ended.

“The state of lawlessness the appellant feared would materialize following the expiry of the injunction has not appeared,” Nestead said.

“Priorities in enforcement may have changed, but the RCMP is still very much present on the site, it’s still arresting those that commit criminal offences, and it’s still facilitating access for the appellant and its contractors to do their work.”

Thompson’s ruling last month acknowledged the absence of an injunction could cause serious harm to the company’s interests and to the rule of law, but said the factors in favour of extending the injunction were outweighed by “the public interest in protecting the court from the risk of further depreciation of its reputation.”

The justice also wrote that interactions between protesters and police have largely been respectful and non-violent even though there have been more than 1,000 arrests at Fairy Creek since the original injunction went into effect.

B.C. Premier John Horgan announced in June the province would defer old-growth logging for two years in Fairy Creek as well as the central Walbran area.

But the Rainforest Flying Squad says old-growth forests outside of the deferred areas are still at risk of being logged.

A court date for the appeal has been set for Nov. 15.