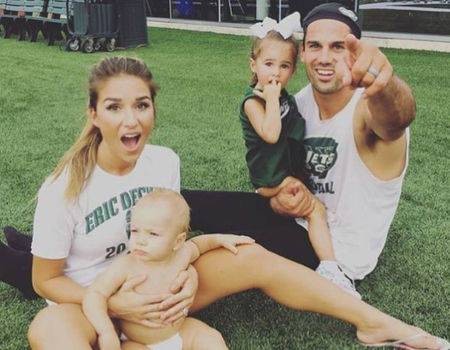 The outspoken 29-year-old made sure to give some love (and major support) to her husband Eric Decker after news hit on Tuesday afternoon that the NFL wide receiver had been released by the New York Jets.

Taking the high road, the social media star took to both Twitter and Instagram to thank the team and the fans.

The mom of two wrote, “Thanks Jets for being so welcoming to us over the past few years! We will miss you guys!!! We had some great memories and loved the fans.”

Thanks Jets for being so welcoming to us over the past few years! We will miss you guys!!! We had some great memories and loved the fans???

Eric is a total badass as you know and the future looks bright!!!

Jessie quickly threw her support under her husband, writing, “Eric is a total badass as you know and the future looks bright!!!”

Of course, the “Lights Down Low” singer brought it back to family, posting an adorable photo of the clan along with with a heartfelt caption.

“Jets fans we will miss y’all! Thank you so much for the amazing memories and for such a warm welcome to your city! Also much love to everyone at the jets facility for taking such great care of Eric and our family,” wrote the devoted wife. “The journey continues! Can’t wait to see what our football future holds.”

The country girl seemed to have a premonition about her husband’s ill-fated future with the New York Jets. Hours before it was reported the Jets would be axing the football player, Jessie expressed concerns via Twitter.

Upon hearing that the Jets had cut ties with veteran linebacker David Harris, who spent 10 seasons with the team, she wrote, “Cleanin house!!! Damn.”

Responding to a fan’s question about her husband’s future she wrote, “Apparently no one is safe. Fingers crossed.” But not even crossed fingers could keep him on the team.

In 2014, Eric signed a five-year, $36.25 million contract with the team. However, he was sidelined for the majority of the 2016 season due to shoulder and hip surgeries.

On New Year’s Day 2017, he wrote, “#2016 has brought me so many joys, laughter, challenges and appreciation to my life!” he began, adding, “Having football taken from me and going thru 2 surgeries has made me step back and be thankful for everything I have in my life! To live in the moment and take nothing for granted!”

Now that Eric’s off the Jets it appears as if the crew is heading out of the Empire State. Will they be headed south? We’ve got a feeling Jessie’s going to keep her fans clued in!