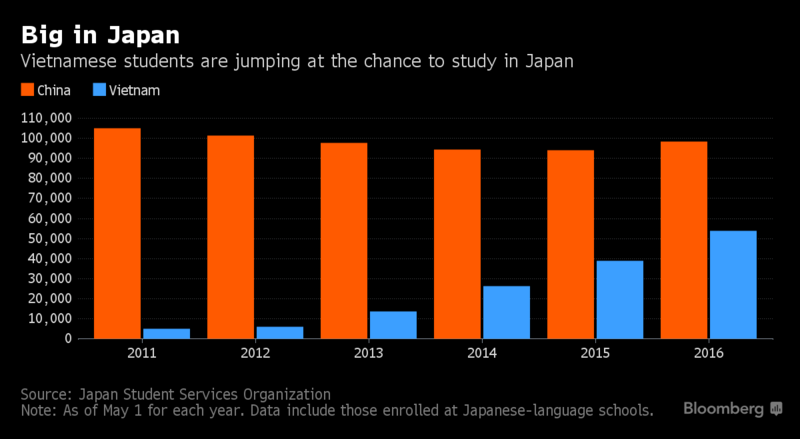 Andrew Mitola had never heard of Mitsubishi UFJ Financial Group Inc. until he met recruiters for the Japanese bank during his junior year of college.

Now the New Jersey native is among the first to join Japan’s biggest lender under an overseas graduate hiring program it introduced to secure talent from abroad. He and 18 others from branches in the U.S. and U.K. went to Tokyo for three weeks of training last month, marking the end of their two-year induction.

“They’re very dedicated to seeing us grow and to bridging the gap across the cultures,” said Mitola, 25, a foreign-currency salesman at MUFG’s New York branch. “They really want to make this a global bank.”

Over the past decade, MUFG and Japan’s two other so-called megabanks have spent more than $54 billion on acquisitions abroad between them as they seek shelter from a brutal banking market at home. MUFG, which owns more than a fifth of Morgan Stanley, this month said it has as much as $9 billion earmarked for buying asset management firms around the world.

Behind the graduate program, however, lies the realization that truly going global requires more than just spending money: it also hinges on changing the bank’s culture. To that end, the $2.8 trillion giant is taking gradual steps such as holding more meetings in English. This year it appointed foreigners — an American lawyer and a former Thai central bank governor — to its board for the first time.

About 41 percent of MUFG’s pretax profit came from abroad in the year ended March, along with a similar share of its loan book, and two fifths of its 150,000 employees now work outside Japan. It’s nearing a goal to become one of the top 10 banks in the U.S. by deposits.

Yet previous experiences offer a sobering lesson. In the go-go 1980s, Japanese companies made a raft of high-profile acquisitions, only to retreat once times turned tough. After Nomura Holdings Inc. bought parts of Lehman Brothers Holdings Inc. during the 2008 financial crisis, costs swelled and employees it inherited from the bankrupt U.S. firm left in droves.

“You can’t deny that they are getting global — they’re taking the right steps,” said Mari Kumagai, a Tokyo-based senior equity analyst covering financials at Morningstar Inc. “I think it’s a net positive but it’s not a clear success story.”

Kumagai points out that MUFG’s domestic and international operations remain separate. “It’s not like the whole group is integrated like Morgan Stanley. It’s still two different houses under the same roof,” she said.

A Buddhist monk speaks during a mindfulness lesson.

MUFG, which is expanding abroad in areas including corporate lending, capital markets and mergers advice, started recruiting university students on foreign campuses in 2015. While hiring directly from college is a long-standing practice in Japan, the country’s banks usually employ experienced locals for posts abroad so they contribute immediately to the business.

“We’re really excited to be able to attract really motivated, talented graduates through our internships,” Keiichi Hotta, general manager of MUFG’s global human resources office, said in an interview. Through the program, the bank is seeking to develop future leaders who can implement its growth strategy, according to presentation materials.

MUFG officials wouldn’t be drawn on whether the graduates could end up running the company. Unlike international banks such as Deutsche Bank AG, Credit Suisse Group AG and Morgan Stanley, Japan’s largest lenders have never had a foreign chief executive. In recent years, however, foreigners have led other Japanese companies, such as Nissan Motor Co. and Sony Corp. and smaller lenders Shinsei Bank Ltd. and Aozora Bank Ltd.

Getting it right requires finding ways to keep star performers who, unlike many in Japan, don’t relish the prospect of spending their entire careers with one employer.

“There never used to be a path to enter a Japanese bank overseas even if a new graduate wanted to,” said Makoto Kuroda, a senior analyst at CLSA in Tokyo. “The challenge is the risk of losing people. It’ll be important to think about how to create an attractive workplace with opportunities for talented staff to grow.”

Still, Zeynep Arican, a Turkish native who is also in MUFG’s first intake of overseas freshmen, said the bank’s recruitment on campus shows that it’s competing for talent on the same stage as the biggest Wall Street firms.

“I see at MUFG there is an effort to make a change and become more American or westernized,” Arican, 25, who manages relationships with corporate customers in New York, said while she was in Tokyo for the training. At the same time, she added that “it’s important for MUFG to preserve its Japanese values.”

Arican and Mitola got a taste of those at the course, when they learned how to serve green tea and listened to a monk lecture them on relaxation and meditation.

In one exercise, the participants formed teams that gave presentations to executives on where the bank might be in a decade. One group discussed ways that all employees can contribute to the company’s global ambitions.

“MUFG is a great place for growth,” said Mitola. “I definitely want to stick with the bank.’’