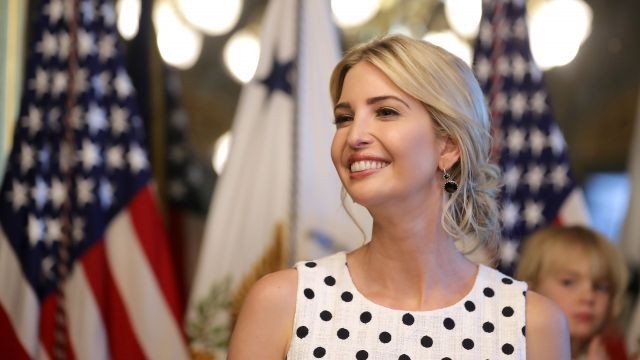 Ivanka Trump is getting a crash course in politics.

The 35-year-old First Daughter appeared on Fox & Friends in New York City Monday, where she was asked if it’s hard to focus on issues that matter to her, given the division between political parties. “It is hard, and there is a level of viciousness that I was not expecting,” the presidential assistant told co-host Brian Kilmeade. “I was not expecting the intensity of this experience. But this isn’t supposed to be easy. I think some of the distractions and some of the ferocity I was a little blindsided by on a personal level. But for me, I’m trying to keep my head down, not listen to the noise, and just work really hard to make a positive impact in the lives of many people.”

Ivanka cited her family’s trip to Israel last month, where she visited the Western Wall with her father, President Donald Trump. “Every day in this experience has been surreal, but that was truly and unbelievable moment. I feel blessed and privileged to have been there. It was deeply personal for me, as you know, standing at the Western Wall in a moment of privacy, because it was really just us. It was our family that was there. It was beyond special. For each of these moments, it’s hard to find the words to adequately describe them,” said Ivanka, who converted to Judaism eight years ago. “Then to move on to Rome and to meet with the Pope…to have covered the three largest world religions over the course of four days, it was very meaningful.”

Watch the latest video at video.foxnews.com

Though she was born in the spotlight, Ivanka confessed she’s not used to having people take photos of her doing everyday things, like going to Starbucks. “That is a weird experience,” she said with a laugh. “I’m looking for alternative routes out of my home. There is a scrutiny and there is an interest that exceeds anything I have ever experienced before. But D.C. has been an amazing place. The kids are thriving, and ultimately for me, that’s the No. 1 most important thing. If the kids weren’t happy, it would be very hard for me. They really love it down there.”

And what about her husband, presidential adviser Jared Kushner?

Regarding reports that Jared has been clashing with Donald’s inner circle, she said, “There is a 24 hour news cycle that…is encouraged by lots of salacious details. But, at the end of the day, we’re all focused on the work, and that’s very true for Jared.” Ivanka added that her husband is “somebody who just likes to get things done, so he doesn’t get involved in…sort of, all of that.”