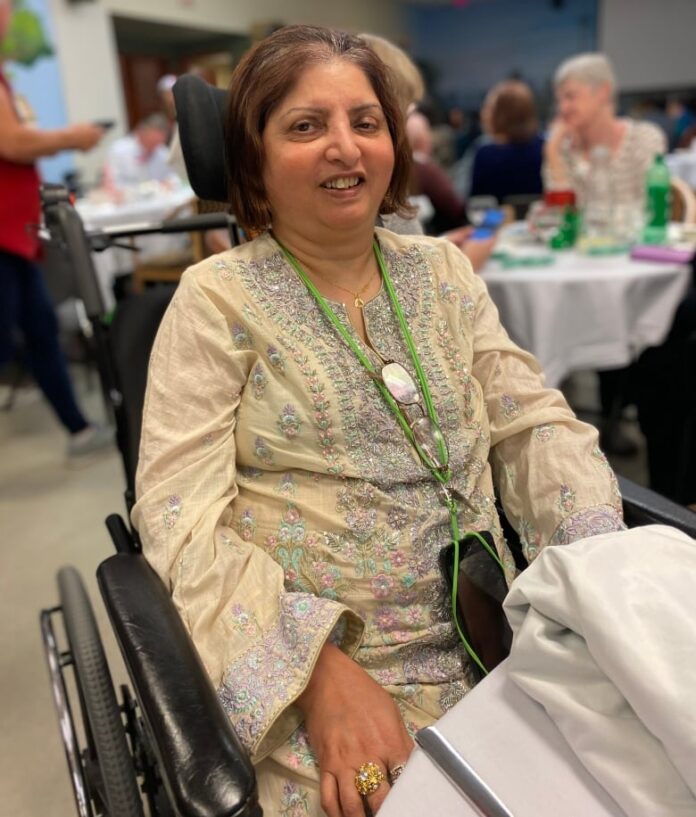 He’s chief medical officer at Holland Christian Homes’ Grace Manor in Brampton, near Toronto, one of the facilities where the military was first deployed in the spring as death tolls across the province’s care homes were rapidly rising.

Grace Manor lost 12 residents. Dozens more, including staff, fell ill — a dark time followed now by another threat causing Varughese just as much, if not more, concern than the coronavirus: the ongoing isolation and loneliness of those in his care.

“As a home that’s had COVID, I never want to see it come back,” he said. “But one of the problems is, we’re never going to be able to replace a family member.”

Varughese is now calling on Ontario’s government to allow family caregivers back inside long-term care facilities, describing them as essential. He argues that with infection control training and protective equipment, it can be done safely even as the pandemic drags on.

“Our homes are finding themselves not able to provide everything that they would love to provide because that next level of glue of [family] caregiver is just not present,” he said, adding family members often play a crucial role in feeding residents, helping them fall asleep, and calming those with dementia.

“One of the benefits of having caregivers is that some of the tasks that may take an hour, or hour-and-a-half, families are very willing to spend that time … and staff can then move to another task — they’re then able to do two or three more things during that same time frame.”

‘Our visits were definitely what kept her together’

It’s the exact kind of care father-son duo Ali and Azeem Shah say they used to provide for their mother and wife, Naila Shah, who lives at Seven Oaks long-term care home in Scarborough, Ont., where 42 residents died during of COVID-19.

Before the lockdown began in March, the family went to the home twice a day, helping out at meal times and with other tasks. They consider themselves essential caregivers and they’re desperate to be allowed back inside to help care for Shah. Her family said she feels like a prisoner.

“There can be so many other things taken care of that us family members can do that will alleviate the home and give them a break,” said Azeem Shah, her son.  “Our visits were definitely what kept her together in terms of being happy and living a life worth living — not being abandoned or alone.”

The Ontario government is facing growing calls to allow family members who help with caregiving back inside long-term care homes after being kept out for months because of the COVID-19 pandemic. 2:08

For Ali Shah, the twice daily visits helped too. The retiree has been married to Naila for more than 40 years, and he misses her terribly.

Despite what she’s going through, Shah said Naila is “more concerned about the family [than herself] … that everybody is OK. How are the grandchildren?”

‘We’ve still got to be very, very careful’

Currently in Ontario, family members are only allowed to see long-term care residents during 30-minute outdoor visits, with few exceptions. Homes are only required to provide those visits once a week and they must be pre-scheduled.

One visitor is allowed at a time and they must wear a mask and practice physical distancing from their loved one. Visitors are also asked to confirm that they have tested negative for COVID-19 in the previous 14 days before their scheduled time.

Beyond those visits, Ontario’s long-term care residents remain confined inside while other provinces are allowing more freedoms and visitor access.

In Quebec, where more than 3,600 people living in long-term care died from the virus, residents are once again allowed on outings outside their facilities. Visitors are allowed inside homes and as many as two people can visit at a time, so long as a home isn’t experiencing an active outbreak.

In British Columbia, where one of Canada’s first widely-reported long-term care outbreaks occurred at the Lynn Valley care home, visitors are also allowed to see their loved ones inside. Visitors are being trained on the proper use of personal protective equipment.

Ontario has no immediate plans to follow suit, according to its health minister, who cited the threat of the virus in a press conference earlier this week. More than 1,800 long-term care residents in the province have died from COVID-19.

“While we know that there are many family members that want to visit their loved one in LTC and do a lot of essential duties and help them in many ways, we are still very concerned about the transmission of COVID-19,” said Health Ontario Minister Christine Elliott on Wednesday.

“We’ve got to still be very, very careful.”

Still, several prominent geriatricians have been arguing for weeks that the benefits of carefully opening up homes to family caregivers would far outweigh the risk of COVID-19.

“They’re missing the point,” Sinha said. “I think a lot of people are going to die of loneliness and isolation and the fact that they’re not getting care at levels of what their families were providing before … if we keep putting these restrictions up.”

The Ontario government has now allowed for limited family visits to long-term care homes, but some doctors say the remaining restrictions are stricter than they need to be, and that is frustrating families. 2:04

Others point to chronic under-staffing in long-term care homes, and families’ long-time role in filling that gap. They argue loved ones would be eager to learn proper infection control to keep risk as low as possible.

“To assume that families are these walking viral receptacles of plague is patently incorrect, and it’s unfair,” said Vivian Stamatopoulos, a professor at Ontario Tech University and advocate for family caregivers. “They have, quite frankly, provided a crucial supply of caregiving labour that is missing in these facilities.

“Without their support, that system collapses. And that’s exactly what’s happened.”

There have been some exceptions in Ontario. Anil Reddi, whose mother lives in a Toronto long-term care home, is now one of few family caregivers allowed back inside a facility in the province.

But Reddi’s access was only granted after he received alarming phone calls from nurses at the home, telling him that his mother had stopped eating.

Their reunion was bittersweet.

“She was angry … my absence was interpreted by my Mom that I didn’t care, I had abandoned her,” he said. “That was so sad that she felt that way.”

Reddi now goes to help feed his mother at mealtimes, like he did daily before the pandemic.

“I’m grateful for that but it’s just sad to see how far she’s gone downhill,” Reddi said. “The words  ‘pandemic prison’ have been coined. It’s so apt.”

Still — being able to help his mother multiple times a day in her own room — Reddi knows he’s getting the kind of access so many others, like the Shah family, are yearning for too.

“For me, it’s really upsetting…and I can only imagine what she’s feeling inside,” Azeem Shah said of his mother. “It’s a constant worry. It’s something in the back of your head that you can’t get rid of.”

Ali Shah has had an outdoor visit with Naila under Ontario’s current rules — a half an hour that went by far too quickly, he said.

Now the 71-year-old lines up for COVID-19 tests every two weeks so he’s allowed to keep seeing his wife — especially with the couple’s 42nd anniversary coming up at the end of the month.

He hopes to see her on, or at least, near the date — July 26. But, from a distance and with the clock ticking, it will be far from a celebration.

“It has affected everybody,” Shah said. “It is a hard time.”