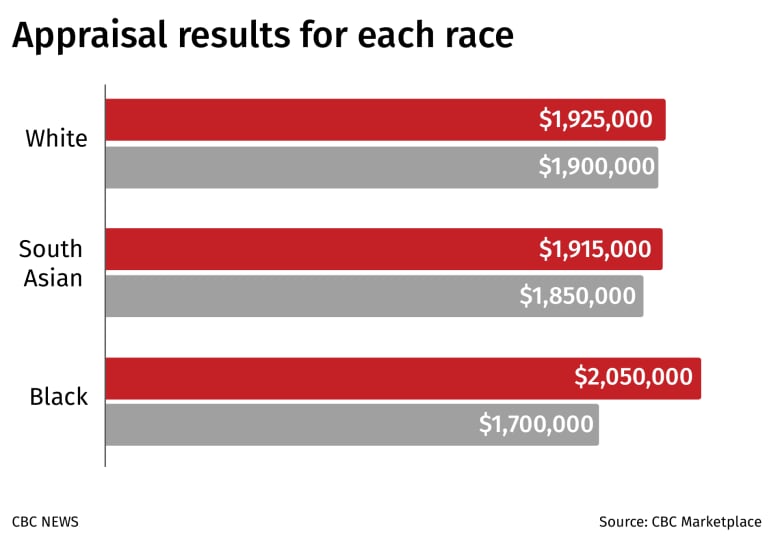 Almost a million home appraisals happen in Canada every year, and the outcomes can determine the terms of a mortgage or whether a homeowner can make use of equity for things like renovations or paying off debts.

Several real estate professionals and homeowners told CBC Marketplace that racial discrimination exists in the appraisal industry, but it’s hard to prove. So Marketplace conducted a test to find out if a homeowner’s race could affect the value of a home.

Three CBC employees of white, Black and South Asian background posed as homeowners of the same detached house in Oakville, Ont. Two appraisals were booked for each “homeowner,” and the visits were documented with hidden cameras.

We also reviewed each appraiser’s interaction with the homeowners. Only the Black homeowner was asked twice if they owned the house, and that was during the appraisal with the lowest quote.

“That enormous variation in and of itself is a problem,” said assistant professor Junia Howell of the University of Pittsburgh, referring to the results for the Black homeowner. Howell pointed out that even though the Black homeowner received the highest estimate, the white and South Asian homeowners still end up ahead in terms of the averages.

Howell says the sample is small, but the results support broader trends from her research.

“Again and again, we see that white spaces are evaluated as worth more, as more desirable, as more marketable,” she said.

Howell also says the white person having the smallest variability in estimates followed by the South Asian person and then the Black person speaks to the “real life implications on those trying to refinance or buy a home.” Consistency across appraisals is ideal, she says.

The appraisers met with each “homeowner” during an exterior inspection. Marketplace also sent interior photos that contained items such as baby pictures and dolls to suggest the race of the occupants. According to Howell, no one has attempted to test the appraisal industry in this way.

‘I have a Caribbean accent’

In June 2018, real estate broker Chukwu Uzoruo was looking to refinance his detached three-bedroom home in Georgetown, Ont., north of Toronto. He wanted to use equity to secure a loan for another property purchase, and prospective lenders required appraisals.

Uzoruo says one appraiser valued his property at $800,000. He thought it was a fair estimate, but continued to shop around for the bank with the best terms. A month later, another lender sent an appraiser, who was greeted at the property by Uzoruo’s wife.

“She was telling me the lady came inside, pretty much just rushed right in,” he said. “[The appraiser] stepped outside and then she left.” 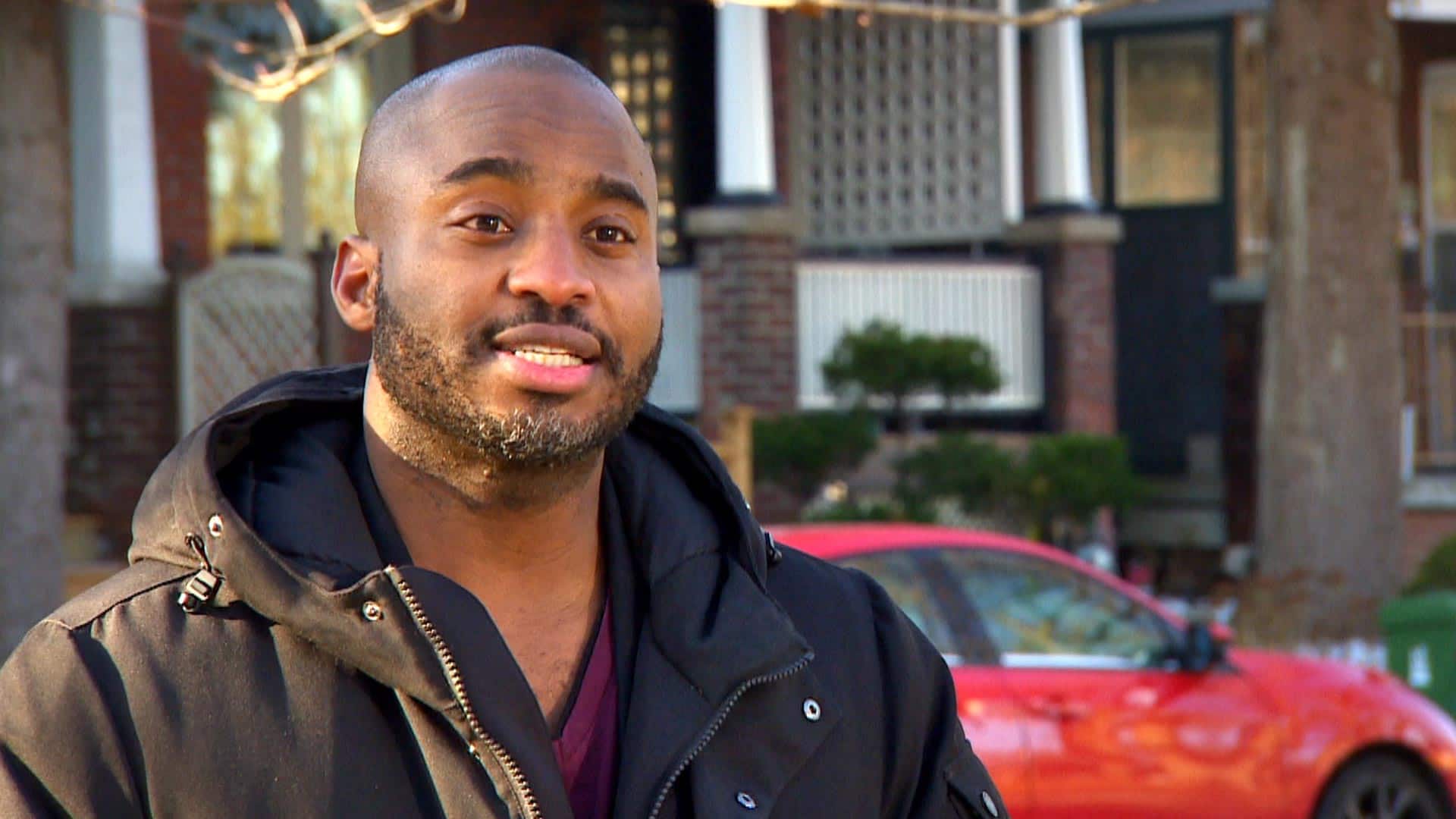 Chukwu Uzoruo says after he raised questions about the low estimate, his concerns were dismissed by the company that conducted the appraisal. 1:03

Uzoruo says he did extensive renovations to the home including two additional rooms in the basement, quartz countertops in the kitchen and an expanded driveway. But he says the appraiser’s estimate was about $753,000, which, he believed, was more in line with townhouses in the area.

When Uzoruo called the appraisal company to raise his concerns, he said the supervisor’s tone was “dismissive” and no change was made to the estimate.

“I’m Canadian born, but I grew up in the Carribean so I have a Carribean accent, and not to mention my name is Nigerian,” he said. “The reaction I got from this guy wasn’t that, ‘Hey, you know what? This is a professional who’s a broker who knows what he’s talking about.’ It was just like there was some fool just trying to get a higher amount for no reason.”

Howell says racism manifests in the appraisal process in two ways. One is the “policies and practices” of the appraisal industry, which, she says, privilege white neighbourhoods. The other is racial biases influencing how appraisers evaluate specific properties.

The issue has been widely discussed in American media and academic research. During the U.S. presidential election campaign, then-Democratic candidate Joe Biden pledged to address it by establishing a national standard for appraisals that would include training to deal with implicit biases.

In Canada, there are two national organizations that accredit appraisers: the Appraisal Institute of Canada (AIC) and the Canadian National Association of Real Estate Appraisers (CNAREA). But there’s no government oversight except for in Nova Scotia and New Brunswick.

The AIC says it’s received one complaint about racial bias since 2009, while the CNAREA told Marketplace it hasn’t received a complaint in the last seven years.

“There are so many parallels between Canada’s appraisal industry and the United States,” said Howell, pointing to their similarities in the appraisal process. “It’s really hard for me to believe that there isn’t a lot of racial bias in appraisals in Canada.”

‘Owning a house while Black’

Uzoruo isn’t the only person who shared an experience of alleged bias with Marketplace.

In 1999, Karen purchased a detached, four-bedroom house east of Toronto for $327,000. Marketplace has agreed to use her first name only due to her concerns about the personal impact of speaking out.

Six years later, she was looking to switch mortgage companies, which required an appraisal. But when she met the appraiser, she said something felt off.

“You can feel the look,” she said. “Like, ‘What gives you the right to live in this house?’ That’s the feeling that I got from that appraiser.”

She recalls the estimate being only about $50,000 more than the original purchase price.

“I said to the [mortgage] broker, ‘This doesn’t make sense that this would be this much and I want another appraisal,'” she said. “‘You know driving while Black? Well, owning a house while Black.'”

WATCH | The cost of ‘owning a house while Black’: 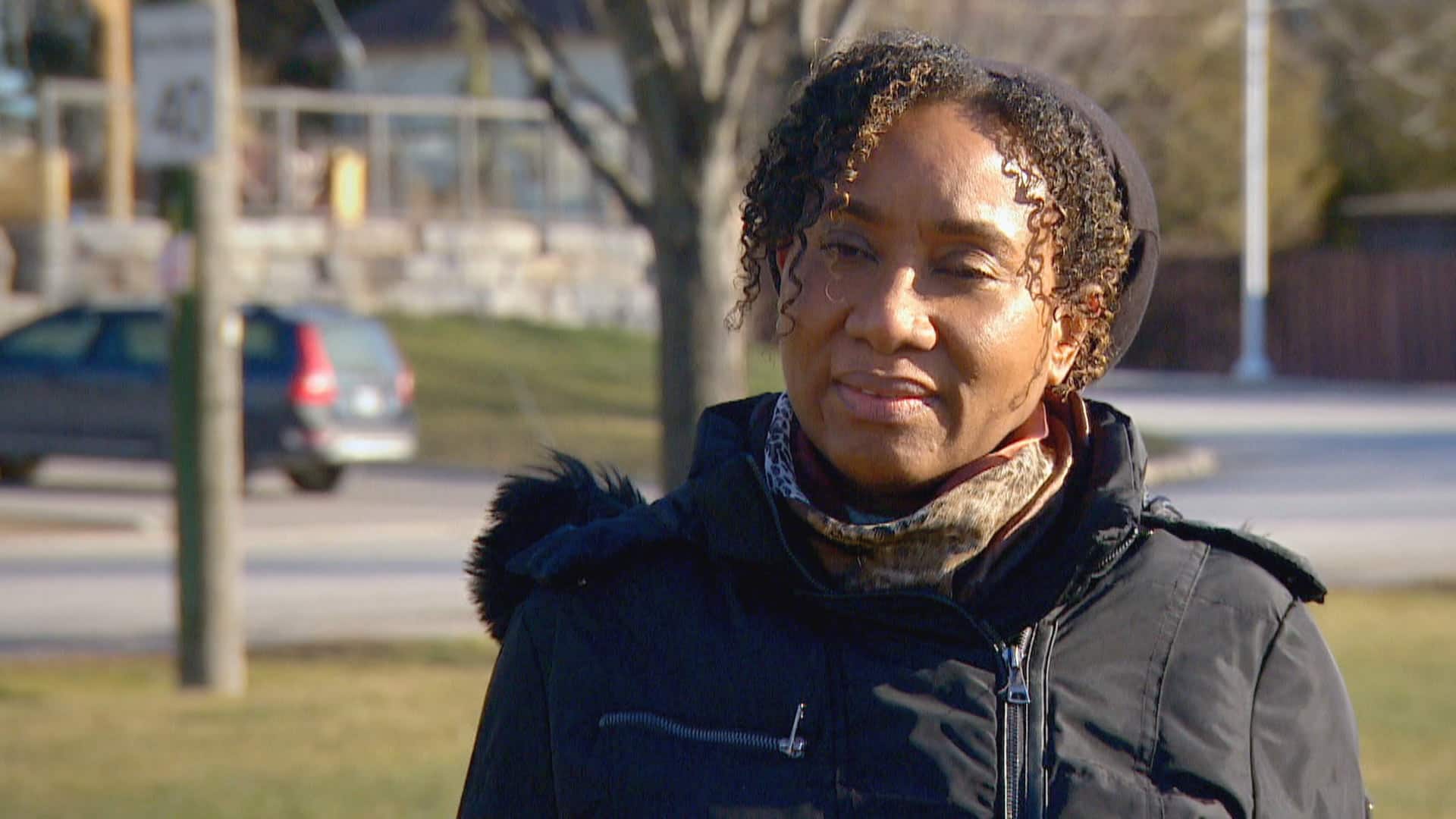 Karen, a Black woman with a home east of Toronto, requested a second home appraisal after experiencing what she believes was racial bias. She says the second estimate was about $100,000 more than the first. 0:53

One of the main elements of an appraisal is what the industry calls the “comparables,” the process of using the sale prices of at least three similar properties to help determine the estimate for the property being evaluated. But the appraiser decides which comparables to use.

Howell says the comparables are one way bias can enter into the process, but she also says things like square footage, the number of bathrooms and the assessment of the property’s condition can also vary for the same property.

“I think the Appraisal Institute of Canada, as well as your federal government, can work toward new standardization processes,” she said.

The industry needs to be standardized, she went on, “because the variability allows for more bias than is really desirable or acceptable.”

Marketplace contacted all of the appraisers involved in the test. One appraiser did not answer questions, asked that we contact his company and hung up, but the rest denied that racial bias played a role in their estimate.

All of the appraisers in the test are regulated by the Appraisal Institute of Canada, so Marketplace provided the results to its chief executive officer, Keith Lancastle.

Lancastle said the difference between appraisals for the white and South Asian homeowners weren’t significant, but he did express some concern regarding the results for the Black homeowner.

“From the outside looking in, it is troubling that one would be so much lower than all of the others,” said Lancastle. “But I don’t know that it’s a fair statement to suggest that you can directly draw a line between that and the race of the homeowner.”

When told about the Black homeowner in our test being asked twice if they owned the home, Lancastle said he had “no idea” why an appraiser would ask that question twice.

After acknowledging that racial biases do exist, Lancastle said: “We have to work to be better.”

He also pointed to a diversity council announced in November tasked with promoting diversity within the organization and the industry. Lancastle said homeowners who believe they were discriminated against can file a complaint with the AIC. The organization also has a mandatory professional insurance program, which can cover homeowners if they suffer a loss due to an appraiser’s mistake. But the homeowner would have to take the appraiser to court.

Uzoruo didn’t know of either process when his appraisal happened and suspects that most people aren’t aware of their options. When Marketplace brought the two men together virtually for a discussion, Uzoruo didn’t mince his words: “My main message to your entire organization is to at least take the problem of bias seriously,” he said.

“Fifty thousand dollars can be the difference between your kid going to college or not, or even paying off your debt, or even retiring comfortably.”