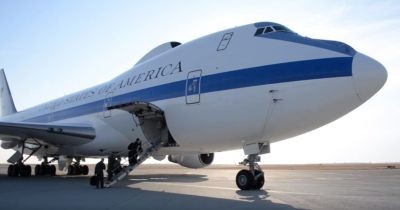 With North Korea and the United States flirting dangerously with the threat of unleashing nuclear war you won’t find President Trump bunking down in any old shelter if the unthinkable happens. Instead the president has his own flying nuclear shelter called a ‘Doomsday Plane’.

To get the President of the United States to safety in the event of a nuclear emergency the US military has a specially modified Boeing jumbo jet that shadows Air Force One. The Boeing E-4B serves as the National Airborne Operations Centre and isTrump’s nuclear fortress in the sky thanks to an array of defence systems that are designed to withstand the effect of electromagnetic pulses.

Inside it’s far away from the cushy comfort of Air Force One. Instead it functions as a working war room with rows of chairs in front of computer screens where military personnel including the Secretary of Defense and the Joint Chiefs of Staff can command ground units and communicate with the Army and Navy, including the nuclear submarine fleet thanks to a five-mile-long antenna.

In order to prevent any cyber attacks the plane, which is has the project name ‘Nightwatch’, is also controlled using traditional analogue instruments, rather than digital gauges and systems that could be compromised.

Enthusiast site AiirSource Military got a rare glimpse inside the aircraft and posted a video to YouTube (below) where it showed military personnel on-board the two-deck jet, showing off modified interior which included a full kitchen and bunk beds for the staff who might be saving the world as they execute war orders from the safety of 30,000ft above the ground.

A briefing room, projection room and rest area is found on the upper deck, while in the lower lobe it contains all the vital essentials to keep the command centre going such as the aircraft’s water supply, electric transformers, and satellite equipment.

According to an article in The Sun, while the E-4B isn’t technically a secret the Air Force does not publically acknowledge owning the flying command centres which have been in operation since 1970 amid the fear of a nuclear attack during the Cold War.

As you would expect, the aircraft doesn’t come cheap. The E-4B is estimated to cost around $250 million and $160,000 per hour to operate. The aircraft, when not towing behind Air Force One, is kept on constant alert at the Offut Air Force Base in Omaha, Nebraska, where its engines are kept running 24-hours a day to be ready to fly to pick up the president the instant an emergency event strikes.

However, the Doomsday Plane isn’t the only aircraft ready to keep the president safe. According to reports the Air Force operates three low-profile but extremely powerful craft to shadow AF1 including smaller customised Gulfstream IV aeroplanes known as C-20s.