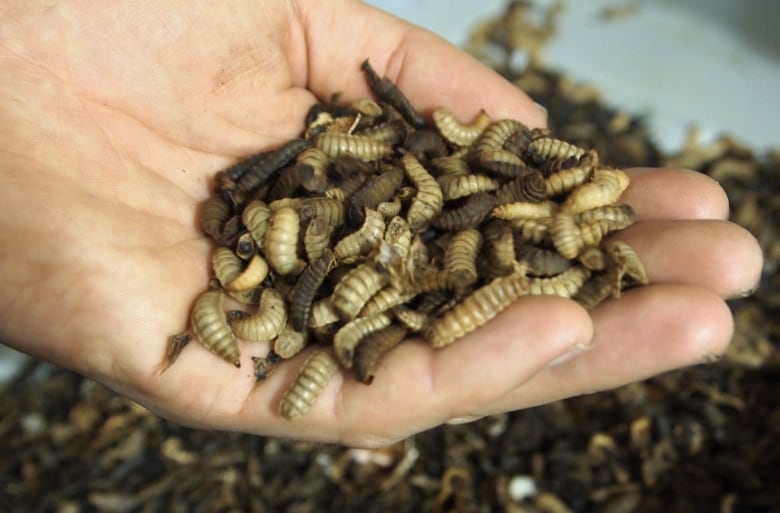 Experts say it’s the oldest fertilizer available and can be found in nearly every ecosystem — so why aren’t we spooning more insect poop onto our home gardens and greenhouse crops?

Insect poop — also known as “frass” — contains all the regular nutrients you’d expect from a good manure, including nitrogen, phosphorus and potassium, and just a tiny bit of it goes a long way when compared to conventional fertilizers.

Frass also has applications when it comes to climate change. A 2019 study published in the journal Applied Soil Ecology suggests that frass produced by mealworms on low-fat, low-starch diets could help protect plants from climate change events.

“One effect of climate change is increased temperature, and that can lead to drought or even flooding,” said Louise Hénault-Ethier, director of the Eau Terre Environnement Research Centre in Quebec City. “Mealworm frass can help plants tolerate these abiotic or non-living stressors.”

What makes this cocktail of undigested bits a standout fertilizer is a key ingredient that fertilizers produced by mammals don’t naturally contain: chitin. Chitin is an abundant natural polymer and structural component that builds up fungi cell walls and the exoskeletons of arthropods like insects and spiders.

When a plant is exposed to chitin, its immune system flags the polymer as a marker of a threatening fungus or insect. While the chitin doesn’t actually harm the plant, it triggers an immune response that benefits plant health.

“Although chitin isn’t injected into plants, it kind of works like a vaccine,” said Hénault-Ethier. “You’re not going to produce the antibodies against COVID if you haven’t been exposed to COVID, but if you receive a vaccine, then you’re going to start to produce the elements that are going to help protect you.”

Hénault-Ethier says frass is being studied as a potential organic replacement for toxic pesticides. Amid the current drive to raise insects as a new protein source, she says their frass may be as valuable as the insects themselves — if not more.

“Insect farmers are first and foremost frass producers, because they can produce two to three times more frass than they do insects,” said Hénault-Ethier, who is also an associate professor with Quebec’s Institut national de la recherche scientifique (INRS).

While the lab data looks promising, frass can’t be marketed as a pesticide yet because pesticides need to be registered with the Canadian Food Inspection Agency, which requires extensive safety testing and demonstration of a substance’s capacity to manage pests.

Frass is also facing some regulatory hurdles, because manure is defined in Canada as a product that comes from mammals or birds.

“Right now, the insect farmers in Canada run [small-scale] operations,” said Hénault-Ethier. “So they don’t have the financial means to pay hundreds of thousands of dollars to register their products with the Canadian government. It would kill the market.”

Construction on that project is more than halfway done and the facility will start production early next year. But in Texas, where the company is headquartered, Aspire is already selling its own cricket frass as a soil supplement and plant protector.

“The vast majority of our business is actually going to come from the pet food market and the fertilizer or soil amendment market,” said Aspire co-founder and CEO Mohammed Ashour. “Because for every pound of crickets, we generate approximately one pound of frass.”

William Hughes-Games: “Just a thought about the 27.5m year geological cycle. Could it happen following a time when all the continents come together into one big continent? The logic would be that the continents insulate the core of the world, which would cause this heat to build up until it could suddenly (geologically speaking) break through in one of these major events.”

Doug Tutty: “It would be interesting if the data were shared with astronomers for their analysis. We’ve been told that the event precipitating the dinosaurs’ demise was an asteroid or comet impact. Is there a belt of something through which the Earth passes every 27.5 million years?”

There’s also a radio show and podcast! Extreme weather is usually treated as a physical problem. But eight years after historic flooding in High River, Alta., the town’s recovery shows the long-term toll climate disasters can have on mental health — and offers lessons for how to help. This week, What on Earth presents a special documentary about what can be learned from High River. What on Earth airs Sunday at 12:30 p.m., 1 p.m. in Newfoundland. Subscribe on your favourite podcast app or hear it on demand at CBC Listen.

The Big Picture: Cleaning up the Gulf of Mexico

Late last week, we looked on in confusion and horror at images of a giant fire amid the waves of the Gulf of Mexico. As more than one Twitter user pointed out, the spectacle looked like the Eye of Sauron, a chilling reference to the Lord of the Rings series. Mexican state oil company Pemex, whose oil rig could be seen nearby, blamed the fire on a gas leak from an underwater pipeline. The company said the fire was extinguished after five hours, but the images are indelible and evoke another, larger disaster in the gulf: the 2010 Deepwater Horizon spill, when an explosion on a drilling rig resulted in an oil leak that lasted 87 days. The Gulf of Mexico has long been a source of deepwater oil, but there is increasing pressure to clean up the mess afterward. Last Friday’s “eye of fire” spill was preceded by a U.S. federal court decision forcing some of the world’s biggest oil companies to collectively pay $7.2 billion US to retire hundreds of oil wells in the Gulf. The case hinges on whether Fieldwood Energy, a company that currently controls those wells and had sought bankruptcy protection, could pass on its liabilities to previous well owners and their insurers. Exxon, which had objected to the plan, estimates its cleanup costs alone could total $373 million; BP estimated theirs would be $300 million.

A central Alberta business is taking a unique approach to carbon capture: serving up some of its emissions in beer.

Breweries produce carbon dioxide during the fermentation process and they use CO2 to carbonate beer. So a central Alberta company is taking what seems like the logical next step, by becoming the first small brewery in Canada to use carbon capture technology to recycle those emissions.

Blindman Brewing, based in Lacombe, Alta., spends about $60,000 a year buying CO2 canisters to give their beers the perfect refreshing texture. But during fermentation, yeast devours sugars, producing alcohol and CO2 as byproducts.

Now, the brewery will be capturing that CO2, scrubbing it and compressing it to carbonate their beers and run canning lines — thereby reducing their emissions and bringing the need for purchased CO2 to near zero.

Kirk Zembal, the brewery’s co-founder, said he spent five years researching the right equipment, which was purchased with the help of a grant through Emissions Reduction Alberta (ERA), a not-for-profit program that helps develop technological innovations.

“When you have these ideas that are simple, that reduce emissions and that are financially viable, well, those are win-win-wins,” he said.

The device, which is about the size of a refrigerator, is designed for small breweries by Texas-based Earthly Labs. It cost $200,000, half of which was covered by ERA.

Zembal estimated that his business would capture about 100 tonnes of CO2.

“There’s 1,100 other craft breweries in Canada, 7,000 or 8,000 in the States and tens of thousands more around the world. If we can all adopt equipment like this, well, now we’re making a big impact.”

He said the investment is expected to pay for itself in two to three years.

The carbon capture program, which will be installed this summer, is just one of the brewery’s steps toward going green, alongside installing a solar array and recycling its plastic can holders.

The brewery is partnering with Olds College to develop a data set on emissions reductions and profitability, so its experience can be shared with other breweries across the country that are interested in the environmentally friendly process.

“I think it’s baked into the ethos of craft beer to do better and, you know, we really all need to reduce our carbon emissions,” Zembal said.