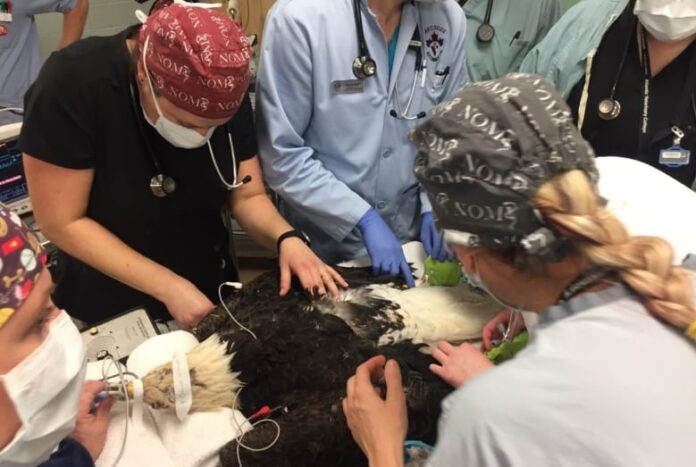 A bald eagle from Prince Edward Island is settling in at his new home at the Hope for Wildlife rehabilitation and education centre near Halifax, N.S.

It is the end of a very long journey for Eagle 450 — or Buddy, as he was affectionately dubbed by staff and students at the Atlantic Veterinary College in Charlottetown.

That’s where he was brought in October 2021, showing signs of serious injuries.

“He was presumably hit by a car and had severe injuries to the head. And then we discovered a spinal fracture after we did a CT. He had surgery about a month later,” said Fiep de Bie, a wildlife technician with the AVC Wildlife Service, who has been caring for the eagle since he arrived.

“He was able to stand within a week after the surgery, which was wonderful. This is a groundbreaking surgery. It’s the second one in the world that we know of, so this was quite an achievement.”

But Buddy had ended up with long-term damage that made it impossible to release him into the wild, so the Wildlife Service needed to find him a new home.

The AVC partnered with Hope for Wildlife in the Nova Scotia community of Seaforth to build a new enclosure to become his forever home.

A group of staff and students from the AVC drove Buddy to Nova Scotia on Friday to help with his transition to his new home.

“It’s one of those things: We’re sad to see them go, but we’re happy for them in the long run to make sure that they can live their best life moving forward,” said senior veterinary student Dillon Scott.

Mi’kmaw elder Junior Peter-Paul performed The Eagle Song for the group before the eagle’s departure from Charlottetown Friday morning.

Four hours later, the eagle arrived at his new home.

The introduction went better than expected.

“Wonderful. It was a bit surprising. I was like, ‘Oh, he’s going to walk around and sit for a while and look around,'” de Bie said.

“But no, he started flapping his big wings, and went straight onto the perch. So that was really nice to to see.”

The ones that are maybe more heartbreaking are the ones where you don’t have this fantastic endpoint.— Dr. Lara Cusack

The enclosure includes areas where he can bathe in the rain, and get natural sunlight.

“The ones that are maybe more heartbreaking are the ones where you don’t have this fantastic endpoint,” said the AVC’s Dr. Lara Cusack.

She described herself as “a little bit sad to see him go, but I would be much more upset if I didn’t have the opportunity to transition him into a permanent home that is where he should be.”

Story will be shared

Buddy now takes on a new role as ambassador, with his story giving visitors a deeper understanding of the challenges bald eagles face in the wild.

“Most of the animals that come to us, come to us because they’ve been injured by human interactions,” said Hope Swinimer, who founded Hope for Wildlife more than two decades ago.

“So by being able to show the public these animals and share their stories, they will become more aware of what they can do to help.

“In fact, one of the main reasons we get wildlife in [is when they] are hit by cars. So just bringing that to people’s attention, making sure they’re aware to slow down at dawn and dusk — little points like that, they all go a long way to helping us live more comfortably with our wild world.”

Swinimer said they will monitor how Buddy is adapting to his new home, and will gradually allow visitors, starting slowly at first.

“We feel a big component of what we do is education, and for people to have the opportunity to get up close and personal and see the beauty of some of these beautiful animals,” she said.

“I think it’s really important and it reconnects them in a really, really delicate way.