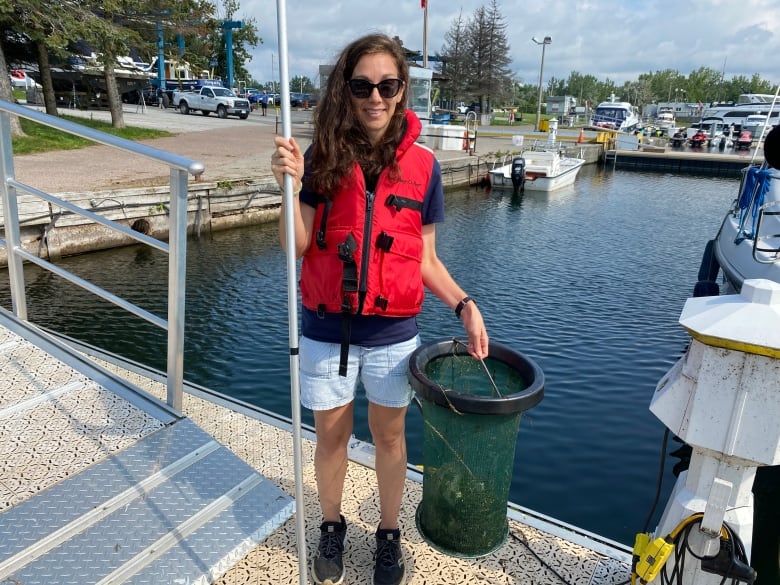 As the people of Toronto flocked to the Lake Ontario waterfront to swim, paddle and generally escape pandemic isolation, Chelsea Rochman’s students at the University of Toronto were throwing plastic bottles with GPS trackers into the water.

The research team’s goal is to track trash that ends up in the lake, to figure out where it accumulates in the water and where it’s coming from in the first place.

Using information from the tracking bottles, they chose spots to put in Seabins — stationary cleaning machines that suck in water all day and trap any garbage and debris — at marinas along the waterfront. They are emptied daily, and the debris collected in them is examined to ferret out what kinds of trash is getting into the lake.

The waste includes well-known single-use culprits like takeout containers and clear plastic packaging, but they also include something that gets less attention: pre-production pellets, produced by the plastics industry.

“They’re the tiny little pellets that are later melted down into plastic and different plastic products,” Rochman said.

“So we can trace them back to industry, they have a very distinct look. And then we are now working with industry to try to make sure that they capture them at the source so they don’t come down into the lake.”

An estimated 10,000 tons of plastic waste are getting into the Great Lakes every year, threatening one of the largest reservoirs of freshwater on the planet that supports nearly 50 million people in Canada and the U.S. A 2021 study on seven fish species in Lake Ontario and Lake Superior found “the highest concentration of microplastics and other anthropogenic microparticles ever reported in bony fish.”

While the plastics industry says it’s working on the problem through industry-led initiatives, advocates say there’s a lack of government regulations to address this kind of pollution.

Industry initiative to clean up plastic

Last year, Rochman’s Tagging Trash team collected about 85,000 pieces of microplastics (smaller than 5 millimetres), along with larger pieces of plastic in the Toronto harbour. About 13 per cent of the microplastics they were capturing were pre-production pellets, which can fly off transport vehicles or facilities and end up in the water.

Rochman has taken her findings to industry groups and companies.

“We are now working with industry to try to make sure that they capture them at the source so they don’t come down into the lake,” she said.

The research program is part of the larger Great Lakes Plastics Cleanup, supported by various government agencies and private organizations. There are now Seabins installed at marinas across the Great Lakes region to help tackle the plastics problem.

The Chemical Industry Association of Canada represents about 75 plastics companies. Last year, it signed onto Operation Clean Sweep, a global program to prevent plastic materials from industrial operations ending up in lakes and rivers.

“We’re working with our members to make sure they’re putting in place the leading technology, policies and practices and training of their own staff to ensure that these plastic pellets don’t end up in the environment,” said Elana Mantagaris, the vice president of the plastics division at the Chemical Industry Association of Canada.

“And if there is a spill because sometimes accidents do happen and we need to acknowledge that we have the appropriate processes to clean up those spills again, preventing the pellets from ending up in the environment.”

The program starts with an assessment at their members’ facilities, Mantagaris said, to pinpoint where plastics might be leaking or falling out. After that, the facilities would be required to bring in measures or equipment to capture that plastic.

For example, Mantagaris said one common spot for plastic pellets to fall out is during transport on trucks or trains, when they are loading their cargo into a facility. Screens can be placed on the rail tracks to catch the pellets spilling out and preventing them from ending up in the environment.

Yannick Beaudoin, the director of innovation at the David Suzuki Foundation in Toronto, says it’s time to be acting more seriously on the plastics problem.

“Do we know enough? Yes, we know enough. Things are bad,” he said. “And the other part of it is there’s no actual excuse for doing this, right?

“When it comes to things like pre-production plastic pellets, we know where it comes from. We know why it happens. And there’s no real excuse for it to happen in the first place. “

Beaudoin says that while industry-led initiatives like Operation Clean Sweep do help, they do not solve the whole problem. Government intervention, along with pressure from consumers is necessary to cut down on these plastics and keep them out of the lake.

Figuring out which government agency or law should be applied can be a challenge. The issue crosses jurisdictional boundaries, with the federal government in charge of protecting transboundary waters as well as regulating chemicals and products that are toxic, Beaudoin said. However, it remains unclear if pre-production pellets are covered.

Provincial governments in theory have even more power over environmental protection, but Beaudoin says enforcement related to pre-production pellets is simply not applied.

Environment and Climate Change Canada referred CBC to its actions on achieving zero plastic waste by 2030. That effort is focused on single-use plastic products and “working with provinces and territories to make producers responsible for the plastic waste that their products generate.”

The Ontario Ministry of Environment did not respond to CBC’s request for comment by deadline.

Across the border in the United States, a bill was introduced this year to address pre-production pellets. The Plastic Pellet Free Waters Act will require the U.S. Environmental Protection Administration to prohibit the discharge of these pellets into waterways from industry and transport sources. The bill is currently making its way through Congress.

“If you had an oil spill somewhere around here, you’d have to call a very specific government hotline and you have to get a process going because an oil spill is something that we deem quite visibly as toxic,” said Beaudoin.

“Well, plastic pellets are oil. They’re just a solid version of it. Why aren’t we reacting in the same way?”

A 2020 study by researchers at Western University also found these pre-production pellets on beaches all over the Great Lakes. The study found that the problem was worse in areas with a lots of plastics industry, such as near Sarnia, Ont., and Toronto.

A group of artists participated in the study to bring the issue to life at an exhibition in Toronto. Plastic Heart: Surface All the Way Through is currently ongoing at the University of Toronto Art Museum, with its central focus on the pellets found through the Western study.

Tegan Moore is one of the artists in the exhibition. Her piece used over 7,000 pellets found on just one beach in the study.

The pellets are strewn in a way to emulate a strand line — the line between the land and water on a beach, where debris is deposited. The pellets in her piece represent the actual density of pellets on that beach in a 1×10 metre area.

Moore hopes her art will act as a sort of data visualization that can help people understand the pellet problem more vividly.

“I think that the piece can bring a visibility to this particular type of plastic pollution, which is just not known and it’s really hard to see,” she said.

“You know, next time someone goes to the beach, they might see them along a strand line and understand what they are.”

That understanding is what researchers like Rochman hope will get more people interested in — and concerned about — the Great Lakes, hopefully leading to more pressure on governments and industry to bring in change.

“I think there’s been a lot more people using the parks and the beaches this year, absolutely, with the pandemic. So hopefully that creates more appreciation,” she said.

“I think there’s a lot of love for the Great Lakes and hopefully that continues. And yes, with climate change and drought and the issues we live in, we’re very lucky to live here. So we should appreciate the resource we have.”