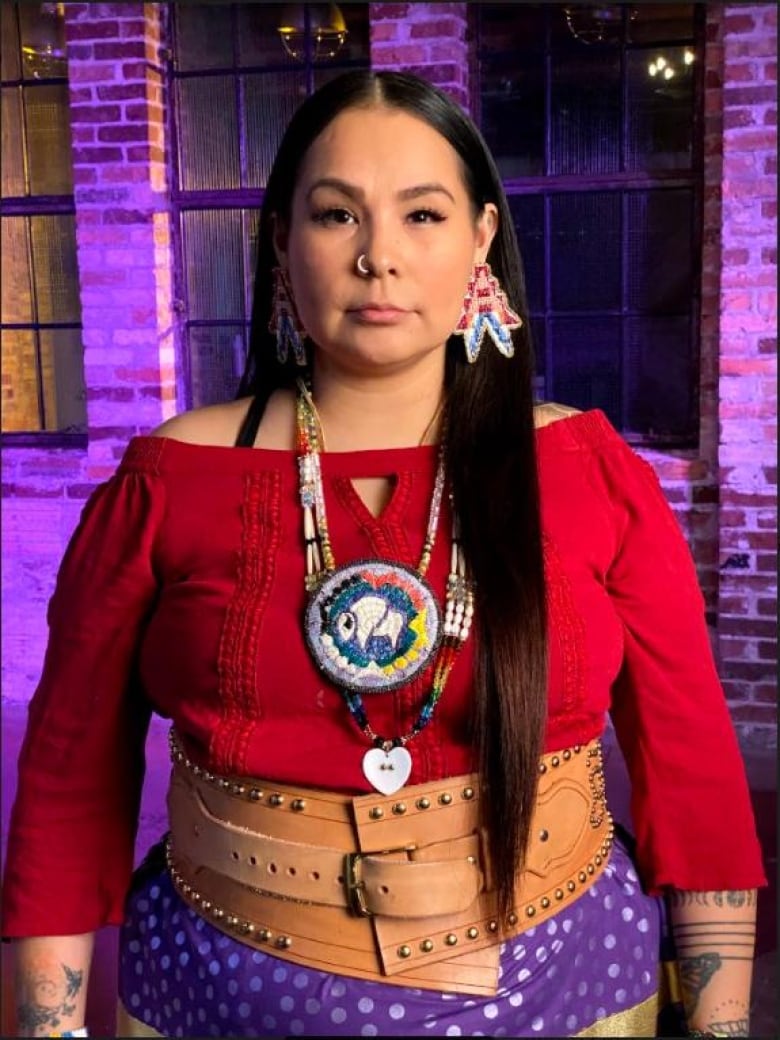 WARNING: This article contains a derogatory term for Indigenous women, as well stories about its impact, that some readers might find offensive or disturbing. The word has been censored for that reason.

Those three words haunt Tala Tootoosis to this day.

The 37-year-old Plains Cree, Lakota Sioux and Haudenosaunee woman teared up as she recalled the first time she was called a “sq–w,” a derogatory slur aimed at Indigenous women.

It came out of his mouth as if he was calling me my name.– Tala Tootoosis

She was a teenager at the time, about to go on her first date with a non-Indigenous man.

“I let myself like him and it came to the end of the night and when I said I didn’t want to sleep with him, that’s when it happened,” she said.

Tootoosis, a mother of three, is a social worker in Saskatoon, as well as a poet, author, advocate against rape culture and well known in her community for her ribbon skirt making.

“And so much more than that,” she said. “I am an Indigenous woman; a proud nehiyaw iskwew [Cree woman].”

When Tootoosis was called a “sq–w,” she said it almost seemed like a rite of passage for the young man she was on a date with.

“That’s how I feel that word got thrown around so easily,” said Tootoosis. “It came out of his mouth as if he was calling me my name.”

CBC News interviewed more than a dozen Indigenous women from the Prairies about their experiences being called this word. Many had repressed the memory of the first time it happened. They called it dehumanizing and said it can have serious repercussions on how Indigenous women view themselves.

They also said it is an illustration of the continuing impacts of colonization, and the concerning way in which many in society view and treat Indigenous women today.

WATCH | My first time being called the S-word — Indigenous women share their stories:

Indigenous women say the word ‘sq–w,’ which is still widely used today, is a dehumanizing slur that can have serious repercussions on how they view themselves. 8:01

The women proudly refer to themselves as ikwe, iskwew, iskwewak (Cree) or kwe (Anishnaabe) — varying terms for “woman” in Indigenous languages.

‘It stopped me in my tracks’

The first time Erica Violet Lee was called a “sq–w,” she was 11 years old. She had transferred to a new school in Saskatoon with predominantly white students.

“I remember playing on the playground and hearing that name being yelled out to me,” she said.

“It stopped me in my tracks.”

All I think of when I hear that word is the times I’ve been called it, and it’s ripped the rug from under my feet.– Erica Violet Lee

Now 30, Lee said she viewed herself differently after that.

“There are real ramifications to being a young Indigenous girl, a visibly racialized woman on the Prairies, in this province, in this country and in this city,” said Lee.

“A lot of those repercussions involve violence. They involve taking away our agency.

“They involve dehumanizing us, and that is directly related to land and our relationship to the land.”

Lee, who grew up on the west side of Saskatoon, is a scholar, philosopher, a musician, poet and community organizer.

During her interview with CBC News, she refused to say or acknowledge the word “sq–w.”

“It’s one of those words that was not created for us. There’s nothing empowering about it for me,” Lee said.

“All I think of when I hear that word is the times I’ve been called it, and it’s ripped the rug from under my feet. And that no matter how educated I am, no matter how good of an Indian I am, things will always come back to me.”

Lee said when non-Indigenous people use the word “sq–w,” many do not know the history or the meaning behind it.

“White folks know this term is offensive and they choose to use it against us because they know it hurts,” she said.

“To me, that definitely points towards it being a power exertion.”

The slur has its origins in Indigenous languages, deriving from words for “woman.”

Several geographical landmarks in Canada and the United States bear the word, many of which have been renamed or are in the process of doing so because the term is now widely known as being derogatory.

However, the word continues to crop up in everyday life and pop culture, from school workbooks to designer fashion lines.

Tootoosis said that the Plains Cree word is a mixture of both iskotew (fire) and iskwew (woman).

“They connect to one another, iskwew and iskotew: We are the heart. We are the fire of the nation,” she said.

“When you break that, and you make up some derogatory term to label us, to belittle us, it takes away so much, especially when you know what we’ve gone through in regards to all the raping, and the sexual assault, all of the sexual childhood abuse that stems from Indian residential schools, and foster homes, all of the sexual violence, especially with MMIW [missing and murdered Indigenous women].”

Tootoosis said that the word “sq–w” is not simply a derogatory term.

“It becomes so much more … of a slur, a hate crime in a word because that breaks you as a woman, to be referred to as that.”

It’s an attack on our nation’s woman spirit, because they see we are rising up.– Val Kinistino

Tootoosis said that to this day, her early experience being called the word on a date makes her wary and often scared to interact with white men.

“There are people that sexualize Indigenous women because that is a part of their lens.”

She said this outdated term is a direct attack on Indigenous women’s spirits as keepers of their culture, and as leaders and land defenders in movements like Idle No More, Standing Rock and Wet’suwet’en.

“It’s an attack on our nation’s woman spirit, because they see we are rising up. We are holding our families together. We are rising up for our people and people don’t appreciate that,” she said.

“We’re the backbone of our nation.”

An opportunity for education

Reclaiming the word is not a popular idea among many of the Indigenous women CBC interviewed.

Geraldine Carriere is an exception. She said that is exactly what she will do when confronted with being called a “sq–w.”

Carriere is aware her perspective could be controversial. She said it is about owning her power as an Indigenous woman.

“No one can say anything to me. You can’t hurt me,” said Carriere, 36, who lives in Edmonton but is originally from Cumberland House, Sask.

“There are certain terms that I think can be reclaimed by our communities … but for me? There’s nothing redemptive or nothing worth saving about the S-word.”

“I’d like to see more sitting with the present moment and thinking, how did we get here? So history doesn’t repeat itself.”

Kokum Brenda Dubois also sees being called a “sq–w” an opportunity to educate.

The Saulteaux and Métis woman from the Treaty 4 territory faced colourism (a form of discrimination based on skin tone) within her community as a small child. She was teased for being “too fair” and “looking white.” Her peers called her a mooniyas-iskwew (white woman).

“I had to undo the conditioning and brainwashing that residential school had to do with us and I had to reclaim my sense of who I was, not only as a woman but my identity and what that meant,” Dubois said.

Now in her 60s, she calls herself a “proud iskwew woman.”

“Wear your skirt, hold your head up and reclaim the sense of who you are. You are iskwew, so every time someone says [the S-word] to you, reframe it. Flip it and thank them and correct them. ‘It’s actually iskwew. Thank you for acknowledging me as a woman,'” Dubois said.