India’s massive state banks are in trouble. with mounting levels of bad loans 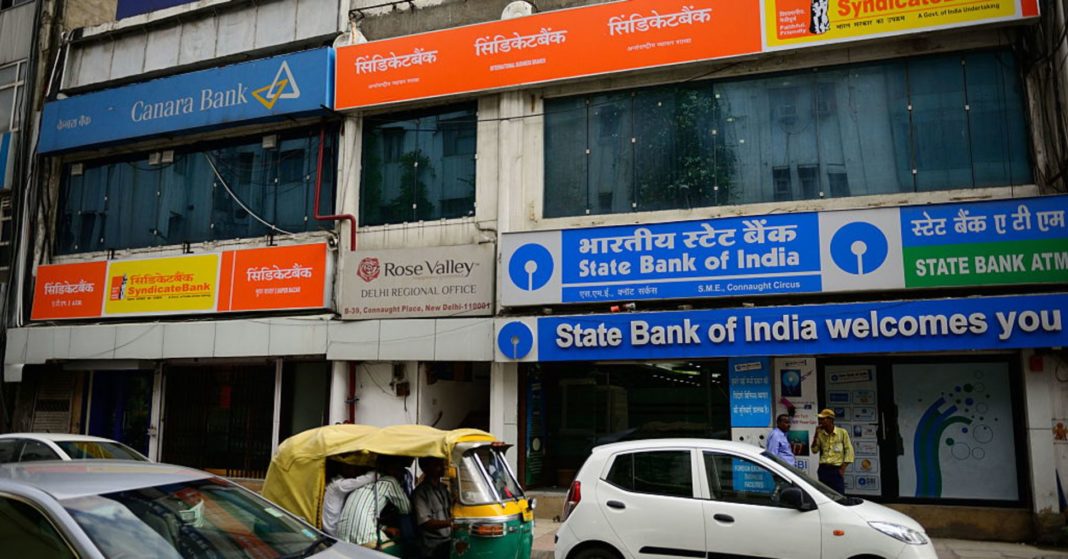 ” The government will have to think through some of the issues,” he added. “They will have to strike some balance, in terms of maybe allowing the smaller promoters or companies to also bid for the same asset.”

For years, state-owned banks have funded projects in sectors like steel, power and infrastructure that were not the best in class and they later became non-performing assets when the business cycle turned, Franklin Templeton’s Rajah said. Unlike in the past, the current Indian government is a lot less willing to bail out the troubled banks by just recapitalizing them. Instead, it is pushing for greater structural changes.

It’s too much of a waste of public money,” Rajah said. He explained that the government would not allow state lenders to default, but it is also not going to guarantee profitability.

Modi also explained that India’s new bankruptcy laws remove subjectivity in the resolution process. “It’s as objective and institutional as it can get. That’s the reason why we’re reasonably hopeful that … once it gets done, we can move on to the next phase of growth,” he said.

India’s public-sector financial institutions control about 70 percent of all banking assets in the country, but they have the highest exposure to soured loans amounting to as much as $150 billion. The 21 state-owned banks had stressed loans of about 8.26 trillion rupees ($ 120 billion) as of Dec. 31, Reuters reported. Private sector lenders, meanwhile, reportedly had a bad loan pile of just about 1.1 trillion rupees.

Amid that storm, private banks are set to emerge as winners.

The corporate lending business– that is, dealing with the bad loans– will be more event driven, Modi told CNBC. He explained that many of the non-performing assets have been recognized, but the resolution will take time. It could take between 12 to 18 months to fully clean up India’s banking sector, he added.

” My view is that, incrementally, a lot of long-term financing of corporate India can also be met by the corporate bond market, which has developed reasonably well,” he said. “Between the corporate bond market and the private banks, I think most of the requirements can be met as far as corporate India is concerned.” Prasad said that is mostly done by the private banks and non-banking financial companies when it comes to lending directly to individuals.

” So far, it seems to be going ahead,” Prasad said. -type businesses.”

She added that recovery in hard asset-backed sectors like steel would be much higher compared to companies in the construction, procurement and engineering industries.

India needs to work out a way to move deposits from public sector banks to private lenders, Prasad added. Still, there are alternative means of funding available to satisfy financing demands from individuals and companies.

— Reuters contributed to this report.

Following that, the Reserve Bank of India tightened guidelines for banks to resolve bad assets in February. Under the new rules, banks are not able to use loan restructuring schemes to delay recognizing bad debt. As a result, banks’ profitability took a hit as they had to declare many existing loans as non-performing assets and required higher loan loss provisions– they are counted as expenses that banks set aside as an allowance for uncollected loans and loan payments.

Earlier this year, Tata Steel bought the insolvent Bhushan Steel for 352 billion rupees ($ 5.14 billion), which reportedly was nearly two-thirds of the loans the company owed to its lenders.

That framework is used by the central bank to assess risks associated with banks based on capital, asset quality and profitability. When a bank is placed on the PCA, its ability to lend is restricted. Beyond that, reports have suggested that public sector banks might struggle to hold onto their share of the deposits market.

The recognition of and the quick pace of resolution for non-performing assets will strengthen Indian banks over the next few years, according to Geeta Chugh, a senior director at S&P.

Experts agreed that the declaration of non-performing assets by the banks was coming to an end over the next few quarters. There are challenges ahead as banks begin to recover bad loans.

Experts believe that, over the years, private sector banks will likely gain more market share from their state-run counterparts because they have stronger balance sheets, they are less exposed to stressed sectors, have stronger governance and are more competitive.

Last year, India amended its insolvency and bankruptcy code, preventing willful defaulters from buying up any of their own troubled assets at discounted rates.

The question worth asking is whether India’s private banks have enough deposits to do the heavy lifting to meet the funding requirements of one of the world’s fastest growing major economies, Prasad said. Private banks have expanded their loan books in recent years and many of them have been running at “really high credit-to-deposit ratios,” he said.

A credit-to-deposit ratio is usually used to measure a bank’s liquidity by comparing its total loans to its total deposits. It means the bank is lending out a large share of the deposits it has received if the ratio is too high. That might suggest potential liquidity problems during a downturn.

” If you take a 10-year view, currently the private sector banks’ market share is 30 percent. Probably it will become 60 percent,” Sukumar Rajah, senior managing director at Franklin Templeton Emerging Markets Equity, told CNBC. As a result, he said, “the overall health of the banking system will improve because the better banks will be a bigger portion of the market and the weaker banks will become a smaller portion of the market.”

” The problem is, if they don’t amend the law, which currently bars promoters [company leaders] from putting in a bid for that asset, then many of these smaller companies will have to be liquidated,” Prasad said, adding that would have socioeconomic implications in terms of job losses.

Harsh Modi, J.P. Morgan’s co-head of Asia ex Japan banks equity research, explained that the retail-focused part of the banking system will likely continue to do well given that the credit penetration in Indian households is still very low and the growing economy will create a “structural tailwind to the retail business.”