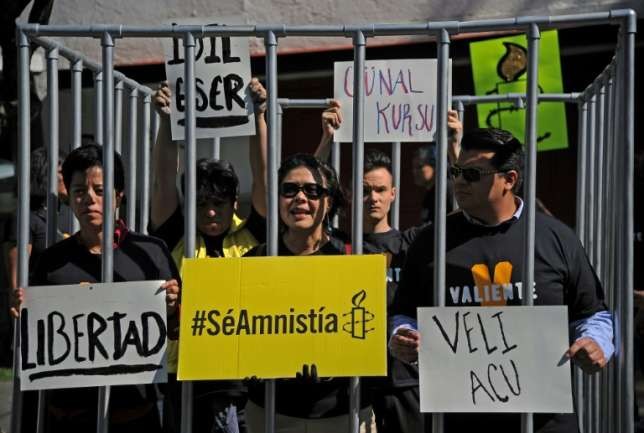 Steudtner’s detention has stoked tensions in particular with Berlin, whose relations with Ankara have plunged in recent months.

Germany sharply criticised the mass crackdown that followed the failed coup which has included the detention of several German citizens.

German Foreign Minister Sigmar Gabriel said he saw “with great concern” charges being laid against Steudtner and the other activists.

He said the terror charges against Steudtner were “absolutely incomprehensible” and the threat of a jail term “unacceptable”, adding that Berlin had immediately contacted Ankara.

“We continue to do everything we can to bring the imprisoned German citizens, including Peter Steudtner, back to Germany,” he said.

Amnesty describes Gharavi as an IT strategy consultant and Steudtner as a “non-violence and well-being trainer”.

Eight of the suspects — including both foreigners, Eser and Kilic — are being held in jail ahead of trial and three others free but still charged. It is not yet clear when the trial will start.

Those charged are accused of having links with various organisations outlawed by Turkey as terror groups including the Kurdistan Workers Party (PKK), the group of Gulen and the far-left Revolutionary People’s Liberation Party-Front (DHKP-C).

It said Eser was accused of possessing material of the DHKP-C while Kilic was formally charged with being a member of Gulen’s group and using the messaging system Bylock allegedly employed by his supporters.