In Mexico Mexican federal agent shot dead with mother; mayor killed A federal intelligence agent and his mother were killed when assailants opened fire on their car in northern Mexico, an attack that came hours after a mayor in western Michoacan state was gunned down outside his home, officials said. 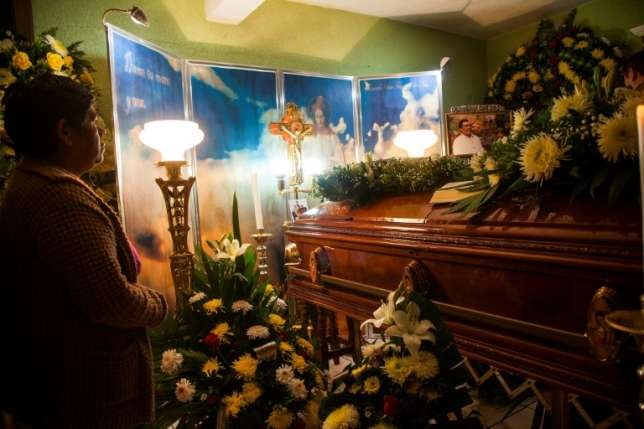 A federal intelligence agent and his mother were killed when assailants opened fire on their car in northern Mexico, an attack that came hours after a mayor in western Michoacan state was gunned down outside his home, officials said.

While the killers in the Friday shootings escaped, both regions are wracked by gun battles between drug gangs and Mexican police, and by turf wars between criminal cartels.

The federal agent — identified as Julio Cesar Baez Guillen, 35 — was traveling with his 65-year-old mother and his 31-year-old girlfriend when gunmen pulled alongside their car and opened fire, the Chihuahua state prosecutor’s office said late Friday.

Baez and his mother died, while the agent’s girlfriend, also an intelligence agent, was wounded but survived.

Baez had been assigned to the Puente Grande maximum security federal penitentiary in Jalisco state, infamous for being the prison from which drug kingpin Joaquin “El Chapo” Guzman escaped in 2001. Guzman is currently jailed and awaiting trial in the United States on drug trafficking and money laundering charges.

Chihuahua, which borders on Texas and is a major transit point for drugs into the United States, forms the notorious “Golden Triangle” along with Durango and Sinaloa states. In the region, marijuana and the poppy flowers used to make heroin are grown and drug cartel violence is common.

Separately, Stalin Sanchez Gonzalez, the mayor of Paracho in the southern state of Michoacan, was murdered Friday morning as he stepped outside his home.

Paracho is best known for its handcrafted guitars, but the region in the past years has been hit hard by drug cartel violence.

Michoacan Governor Silvano Aureoles announced the mayor’s death as he expressed his condolences on Twitter.

Nearly 50 mayors across the country have been slain since 2003, according to Mexico’s National Association of Mayors.