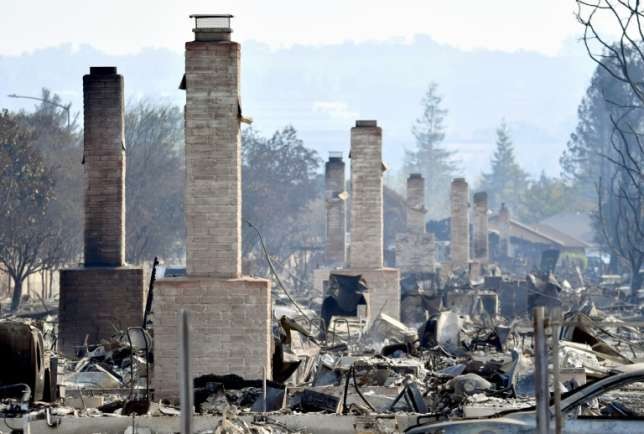 Body recovery teams carried out a grim search for victims of California’s devastating wildfires on Monday as firefighters made progress battling blazes which have killed at least 41 people.

More than 200 people remain missing eight days after large wildfires ignited in the wine-producing northern counties of Sonoma and Napa and other parts of the sprawling state.

Cadaver dogs have been enlisted to help recovery teams find the bodies of victims of the wind-driven fires, which bore down so swiftly that some residents had just minutes to flee their homes.

Officials have said some of the remains found so far in the rubble of gutted homes were just “ash and bone” and identification could take weeks.

Many of the victims have been elderly people in their 70s, 80s and 90s.

A statue at a burned out property in Santa Rosa, California

Sonoma County has been the worst hit, reporting half of the 41 deaths so far, and an estimated 3,000 homes were destroyed in the city of Santa Rosa alone.

Entire neighborhoods of Santa Rosa, population 175,000, the county seat, have been razed to the ground with just chimneys all that remain of many homes.

Residents have told harrowing tales of jumping into swimming pools and spending hours in cold water while fire consumed their homes.

The California Department of Forestry and Fire Protection (Cal Fire) said Monday that the death toll rose to 41 when a private water tender driver died in a vehicle rollover in Napa County.

Mandi and Lane Summit embrace at their fire-destroyed home in Redwood Valley, California

In an update early Monday, the agency said firefighters were making “good progress” against the fires “despite the fact that several new fires ignited.”

Only light winds were forecast on Monday, providing hope that more progress could be made in containing the blazes.

Evacuation orders were lifted meanwhile for several areas and Cal Fire said the number of people evacuated had dropped to 40,000 from 75,000.

A total of 5,700 homes and businesses have been destroyed by the fires, the deadliest in California’s history.

“Nothing has been this bad that I’ve ever seen in our state, the devastation, the horror, the displacement,” Governor Jerry Brown said Saturday. “It’s not over yet.”

Tammy Key was among residents of the Santa Rosa neighborhood of Coffey Park who returned home on Sunday.

Key said firefighters stopped the blaze close to her house, but many of her neighbors were not so lucky and lost their homes.

“It’s just so devastating to think of living here without all of our neighbors,” Key said “We don’t know what’s gonna happen, but I hope people rebuild and come back.”

Share
Facebook
Twitter
WhatsApp
Pinterest
Linkedin
ReddIt
Email
Print
Tumblr
Telegram
Mix
VK
Digg
LINE
Viber
Naver
Previous articleNorth Korea EU blacklists country’s army over weapons programme The European Union blacklisted the North Korean army on Monday as part of fresh sanctions aimed at punishing the pariah regime for its nuclear and ballistic weapons programmes.
Next articleUN North Korea will not negotiate with a ‘hostile’ US North Korea on Monday told the United Nations that it will never negotiate the dismantling of its nuclear weapons unless the United States reverses its “hostile” policy.