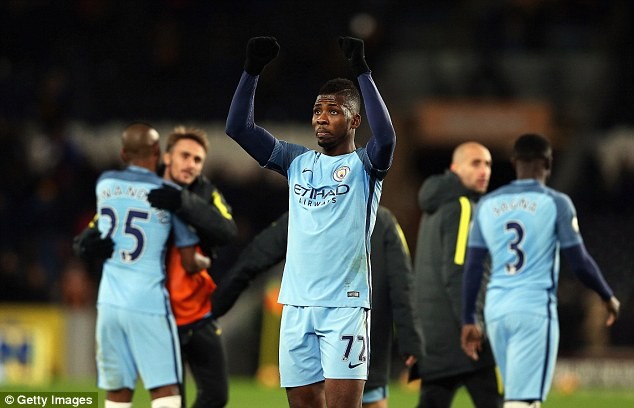 The Super Eagles forward   struggled  to find consistent minutes at the Etihad Stadium  last season as the arrival  of Brazilian wonderkid Gabriel Jesus pushed him out of the spotlight, with  the Citizens manager  Pep  Guardiola preferring his partnership with  Sergio Aguero  up front.

His failure to make any meaningful impact as Man City struggled to  a  third-place finish  in the Premier League – and Guardiola’s reported move to sign either  wantaway Borussia Dortmund forward Pierre-Emerick Aubameyang  or Monaco hotshot Kylian Mbappe during the summer transfer market – has left a dark cloud hanging over Iheanacho’s  future at the club.

The Citizens are said to be ready to offload their Nigerian import to make room for a new striker signing this summer,  but the 2013 FIFA Under-17 World Cup Golden Ball winner, whose contract at the Etihad side expires in 2021, is said to have told the club that he would stay and fight for his place in Guardiola’s side.

Following West Ham’s inability  to convince Iheanacho, who  Man City value at £20m, to move to East London,    Crystal Palace, Everton, Swansea and Leicester have been linked with the player ever since.

But family sources told our correspondent that the former Taye Academy star would only  leave the Premier League giants  for a big club.

Sources revealed that the player, who earns  a reported £85,000 per  week at Man  City, is not ready to take a wage cut as the clubs who have shown an interest in his services are not in a position to match what he earns at  the Eithad outfit.

Former Nigeria captain Henry Nwosu, who is close to the player and his family, also confirmed that Iheanacho won’t leave the Citizens in the summer.

“I met his brother in Owerri and he told me that the reports that Iheanacho will move to another club to enable him to get playing time are not true,” the 1980 Africa Cup of Nations winner told our correspondent on the telephone.

“I’m sure the player will stay at Man City to fight for his place next season.

“He’s a good player, but I think the coach is playing him out of position.

“If the coach allows him to play as a support striker or as a midfielder, he will  get best out of him.”

Meanwhile, Iheanacho said last month he had no intention to quit Man City in the summer, saying he was already preparing for next season.

“I’m happy to stay at Manchester City and keep fighting to help them achieve what they want to achieve. Manchester City is a big team and we need to go far as a squad, so we need everybody,” he told the club’s official website.