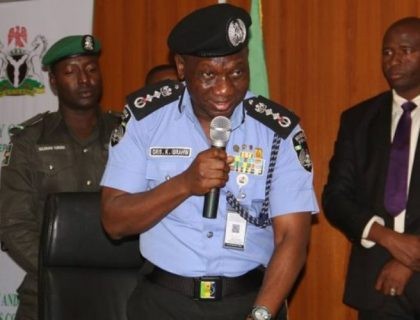 Speaking to newsmen while on tour of duty in Imo State, the IGP said that eight suspects in connection with the abduction had been rounded up by the police in a bid to rescue the pupils as quick as possible.

Responding to a question on the spate of abductions in the country, especially in schools, Ibrahim said “eight suspects have been arrested by the police in connection with the abduction of the six pupils in a school in Lagos state. We are in touch with school proprietors on the need to establish schools in ensured environments”.

Though the IGP did not disclose the names of the arrested suspects, he assured that the police were working hard to rescuing the captured pupils, even as he asserted that the force were engaging parents and communities on the urgent need to discourage their children from taking part in crimes.

According to Idris, while the police engaged the communities and parents in nipping crimes in the bud, the establishment of the Police Intelligence Technical Unit which he launched in Imo State during the visit would help the police from preventing crime from happening.

In his address, the Imo State Commissioner of Police, Chris Ezike, commended the IGP for the prompt steps he took in arresting the dreaded kidnap kingpin, Henry Chibueze, popularly known as Vampire who terrorised the state and other South East states before he died in a gun duel with the police in February.

Ezike said that the Police Intelligence Technical unit which the IGP commissioned in the state would be beneficial to the entire South East zone in tackling the menace of kidnapping any other crimes in the region .