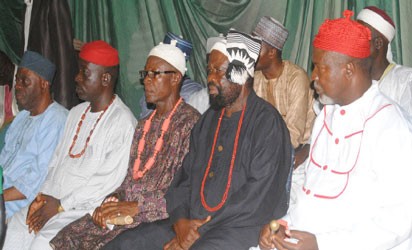 By Emeka Mamah
Enugu – The Igbo Civil Society Coalition, ICSCO, made up of Igbo activists, civil society organizations, professional bodies, faith based organizations and town unions have accused Arewa youths of allegedly goading Nigerians into another civil war through hate speeches, and urged the Federal Government to avert the ugly situation.

Arewa Youths
ICSCO also, expressed dismay dismayed over the inability of the National Assembly to align itself with the wishes of Nigerians cutting across partisan, ethno-religious and socio-economic lines, that the country should be restructured into six federating units to ensure justice and equity in the country, just as it appealed to the Indigenous People of Biafra, IPOB, to withdraw its threat to scuttle the November 18 governorship election in Anambra State.

These were contained in a communique issued after its general congress in Enugu weekend.

“Constitution Amendment: that ICSCO is dismayed at the National Assembly’s inability to align itself with the obvious wishes of Nigerians cutting across partisan, ethno-religious and socio-economic lines, which is that Nigeria should be restructured so that there will be devolution of powers from the Federal Government to federating units.

“Therefore, in the interest of national stability and socio-economic advancement of the country, ICSCO appeals to the National Assembly to re-consider its stand on devolution of powers from the Federal Government to the federating units (regions).

“Unless that is done, Nigeria will never be able to attain economic advancement or political stability since the feeding bottle federalism practised in Nigeria today is an aberration and does not make room for the development of the federating units based on areas of comparative advantage.

“Arewa Youths Ultimatum to the Acting President to Arrest Mazi Nnamdi Kanu: ICSCO observes with dismay that Arewa Youths have refused to withdraw the Quit Notice they issued to Ndigbo despite interventions of well-meaning Nigerians, even from their region.

“Rather, they have continued to issue hate speeches, threats and ultimatums. The other time, they asked the Federal Government to declare IPOB a terrorist organization.

Last time, they descended heavily on the Acting President- Prof Yemi Osibanjo, who despite all his humility and loyalty; they claimed was plotting to unseat his principal-President Buhari.

“Now, they are giving the same Acting President an ultimatum to arrest Mazi Nnamdi Kanu, the IPOB leader.

It is obvious that these youths want to force Nigeria into war at all cost. If not, what is the rationale behind asking for Kanu’s arrest because he is asking for referendum when they insist that there will never be restructuring.

“Anambra Governorship Election: ICSCO is appealing to the IPOB to re-consider its stand with regards to boycotting the election. Secondly, we appeal to all parties involved to come together as Ndigbo in order to build consensus on the issue to engender peace and unity of purpose in Ala-Igbo (Igbo land).