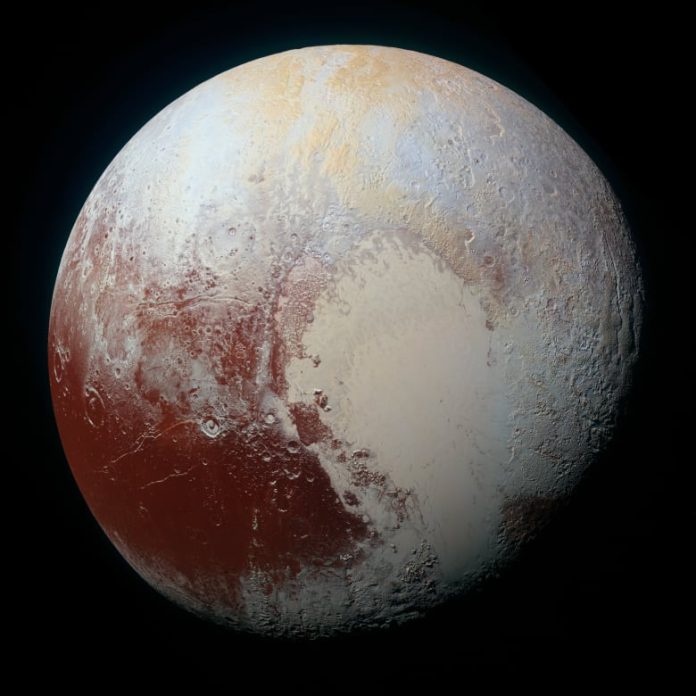 Pluto, once considered the ninth planet in our solar system until it was demoted to a dwarf planet in 2006, had been shrouded in mystery since its discovery in 1930. But thanks to NASA’s ambitious New Horizons flyby in 2015, the curtain has been pulled back, and astronomers continue to reveal that Pluto is much more interesting than previously thought.

When New Horizons flew 7,800 kilometres above the surface of Pluto, it revealed a world unlike anything we’d ever seen. There were flat plains, mountains and even a thin atmosphere. It was far from the stagnant, blue, icy world that had been depicted in artists’ impressions over the decades. It was an eye-opening discovery.

And one of the most intriguing images sent back to Earth was one that suggested the possibility of ice volcanoes, also called cryovolcanoes.

“[At the time], we got back little chunks of images, either smaller images or parts of images first, because we couldn’t get all the data back at once. And it just so happens that one of those postage stamps that we got back did happen to have part of this cyrovolcanic region in it,” said Kelsi Singer, a planetary scientist at the Southwest Research Institute in Boulder, Colo., and deputy project scientist on New Horizons.

These volcanoes wouldn’t be something like those here on Earth. Instead, they would be fed by water ice and other volatiles like nitrogen, methane and carbon monoxide.

Still, there was some debate that the images were being interpreted properly.

Now, a new study published Tuesday in the journal Nature Communications provides more evidence to support that the icy world is home to these strange cryovolcanoes, some seven kilometres tall and roughly 10-to-150 kilometres wide.

“Now we have all the data back. And so we can use all of those pieces of information together,” Singer, lead author of the study, said. “And that includes not just the images, but also typography that’s created from the images, because sometimes your eye can trick you. So the typography makes you be honest about what the features are.”

Though these cool volcanoes aren’t quite like the ones we see here on Earth, they do have some similarities.

Instead of a violent eruption with lava, rock and dust spewing into the sky, it’s believed that the material these volcanoes produce — likely some water ice, though there is also nitrogen, methane and carbon monoxide ice on Pluto — are brought to the surface slowly by some sort of internal heating mechanism. 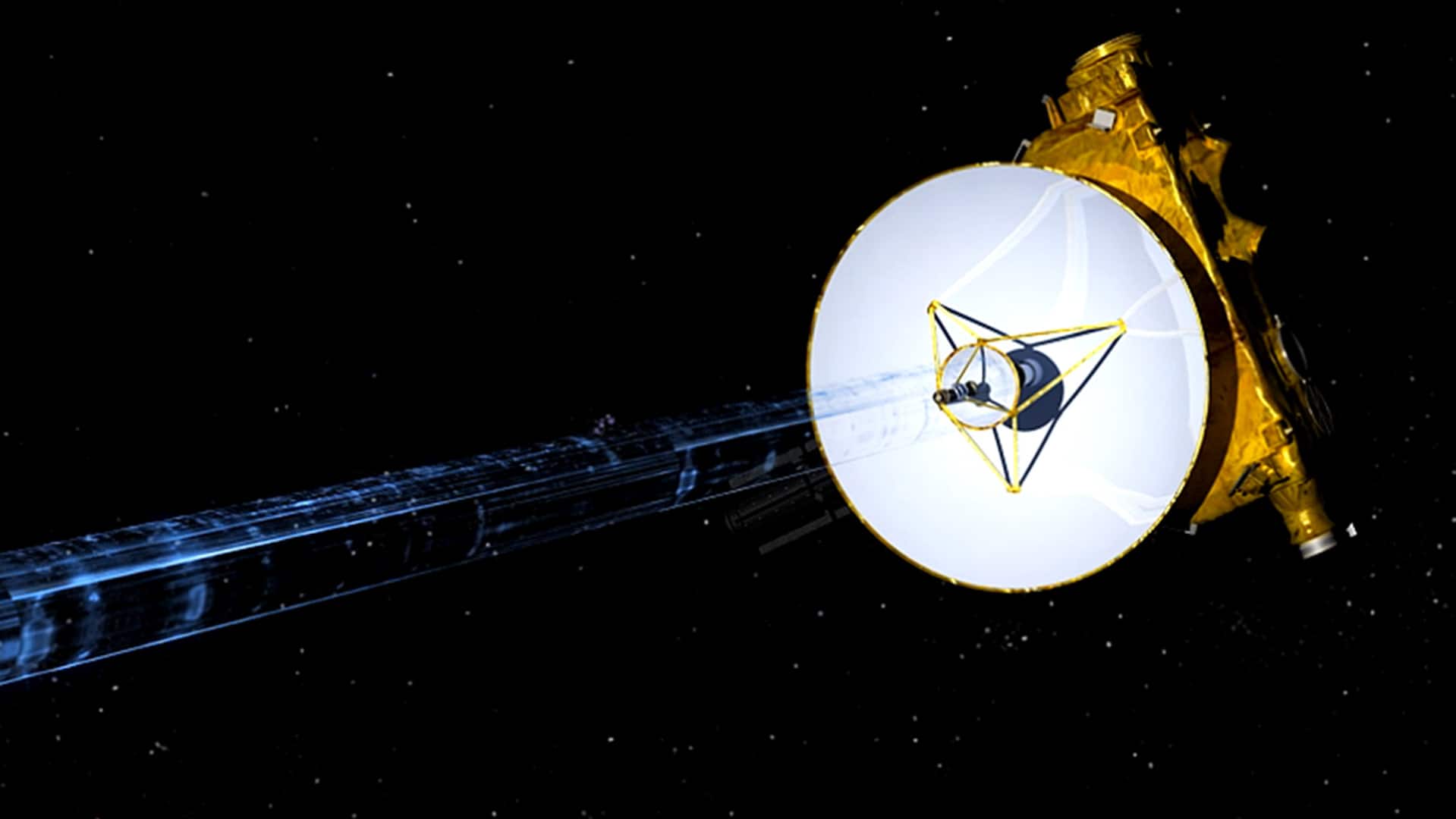 NASA’s New Horizons spacecraft made a successful flyby of the tiny, icy celestial object known as Ultima Thule, 6.5 billion kilometres from Earth, and the work of Canadian researchers was critical to the historic mission. 3:27

But there’s something that remains to be explained in their findings.

“Between the composition data and the way the features are, we’ve said that it has to be at least a good part water ice,” Singer said of the features seen on Pluto. “And that’s difficult to explain, because you still have to have that stuff be mobile, and it essentially requires some kind of heat source.”

There are a couple of ways to get that heat source. One is from the rocky core of a moon or planet where elements break down. That heat can remain trapped until it is released in some way.

Another is by tidal heating, where a moon goes around a planet in an elliptical orbit. Due to the difference in distances, the moon can be squeezed, much in the same way one might squeeze a stress ball, which in turn creates heating. This is seen in some of Saturn’s moons, like Enceladus.

But Pluto is too far away from any large body to get this tidal heating, so it could be that its relatively small core is creating this heat that then pushes up the mixture of water and nitrogen ice. And it’s likely that there are other elements at play, as well.

“We think that it was probably either like a very slushy mixture of ice and water. So it wasn’t like a thin flow. Or it could have been kind of like ketchup, which is, you know, not liquidy, but can still flow,” Singer said.

The new study also suggests there may be an ocean 100-to-200 kilometres beneath Pluto’s icy crust.

But not everyone is convinced that what we’re seeing on Pluto is a result of cryovolcanism.

“So yes, there’s this topic of cryovolcanism,” said Catherine Neish, an associate professor at Western University who studies planetary surfaces, including moons of the outer planets.

“And quite frankly, I’m not convinced it’s very common. Because it shouldn’t be. Think about it: You’ve got a nice glass of water. If there’s some ice in it, what does the ice do? It floats, right? So the water is stuck on the bottom, the ice is stuck on top, it’s really hard to get that dense water up and over the less dense ice.” 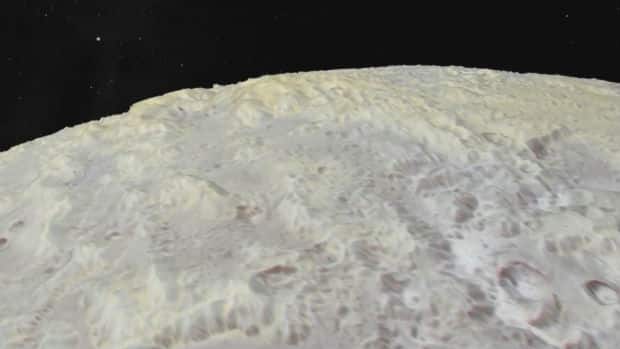 Pluto may not be a planet but its still exciting scientists

But Singer believes data supports the idea of cryovolcanism, and recent at that, at least in astronomical terms. She believes that these eruptions may have occurred as recently as 100 million years ago. And there’s still the potential that they are still happening.

Singer said that to some degree Pluto is still somewhat of a mystery, and there are still many questions she’d like to see answered. The images sent back account for roughly 40 per cent of the dwarf planet as a whole. And seeing more of Pluto might reveal more of these regions, which in turn would help astronomers determine how much heat might be needed to create these cryovolcanoes.

Singer says she is eager to reveal more about this distant world. It would help astronomers understand more about own solar system and its origins, not to mention the myriad moons that lie out in the outer regions.

“Pluto’s unique in its environment. It’s unique in its distance,” Singer said. “And it’s not what we expected. So it really just kind of makes us have to say: what are we missing in our models? And unfortunately, we don’t have all the answers there.”