I wanted to do things perfectly: How the model minority myth affects me and other Asian people 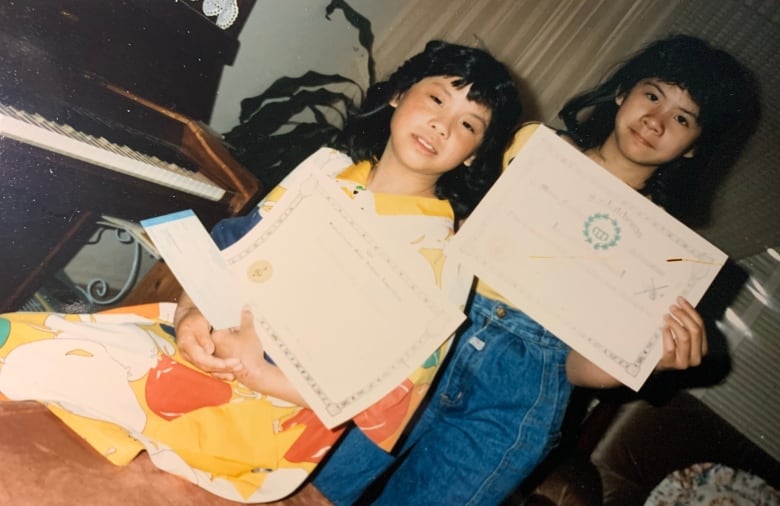 This first person piece was written by Florence Hwang, a journalist with CBC Saskatchewan.

I’m 12 years old, in a classroom at Judge Bryant School in Regina. Our Grade 6 teacher Mr. Clark asks us to pull out our books to discuss what we’d been assigned to read. I freeze, despite having done the homework in advance.

I hope and pray Mr. Clark doesn’t call on me. I try to think of what I could say if he does, then think of all the negative responses I might get, then decide not to bother speaking up at all. I breathe a sigh of relief when I escape any questions.

I can still remember that moment in Grade 6. But the pressure to appear intelligent caused great anxiety for me during class discussions all the way through school and even in university. I didn’t realize it, but I was feeling the effects of the “minority model myth.”

The term model minority myth was coined in the 1960s to denote so-called positive stereotypes of Asian people, such as work ethic, emphasis on education and the desire to become successful, intelligent and wealthy. Studies have confirmed such stereotypes can lead to Asian students feeling they don’t measure up and fixating on their shortcomings.

According to the American Journal of Health Studies, Asian students are more likely to experience mental health concerns such as anxiety, depression and isolation. As a result they may lack confidence and self-worth.

I never felt like a model minority. I also didn’t think I fit in as a Canadian. My mental health suffered.

I struggled with school as a young student, partially due to a delayed start in learning English (I initially learned the language by watching Sesame Street).

I wondered why I wasn’t fitting in this stereotype of being “smart.” I thought I was just a “dumb” kid because I was an average student until Grade 3. Thankfully, my teacher Mrs. Nicholson gave me extra assignments to help with my comprehension skills.

In Grade 5, my father taught me how to study more effectively. It was a lot of work, but it paid off. He taught me that doing well in school wasn’t just a matter of being intelligent, but also hard work.

Learning how to study didn’t mean I suddenly was at the top of the class. It was helpful to my academic success, but it also stressed me out. I wanted to please my parents and do well. I wanted to do things perfectly. I would often lie awake at night with racing thoughts about the school work I needed to do the next day.

The model minority myth doesn’t account for the problems Asians have with discrimination.

Growing in Saskatchewan, most of my classmates were white. Even though they were generally cordial, I didn’t have many friends. I didn’t experience a lot of racism, but I still did get called “Chinaman,” a term that left me more confused than offended. I wasn’t a man and wasn’t born in China.

I would over analyze why I didn’t fit in. ‘Why aren’t people talking with me,’ I wondered. ‘What did I do to offend them? What could I do next time?’

The anxiety would keep me up until midnight. Then, when I saw how late it was, I would stress about trying to fall asleep or being afraid I would sleep in. I’d often be tired and have stomach aches.

High expectations combine with discrimination to cause psychological damage to Asian-Canadians. There has been some research on this, but I believe the myth aspect and its mental-health effects need to be examined further. I feel there are complicating cultural factors that have not been taken into consideration.

Mainstream media is starting to include more Asian experiences with shows like Kim’s Convenience, and movies like Crazy Rich Asians and Always Be My Maybe. I feel there still needs to be more nuanced depictions of all types of Asians, not just the typical tropes, but at least it’s a start.

Interested in writing for us? We accept pitches for Opinion and First Person pieces from Saskatchewan residents who want to share their thoughts on the news of the day, issues affecting their community or who have a compelling personal story to share. No need to be a professional writer!