‘I tried to be tough,’ says survivor of Marieval Indian Residential School sharing her story for 1st time 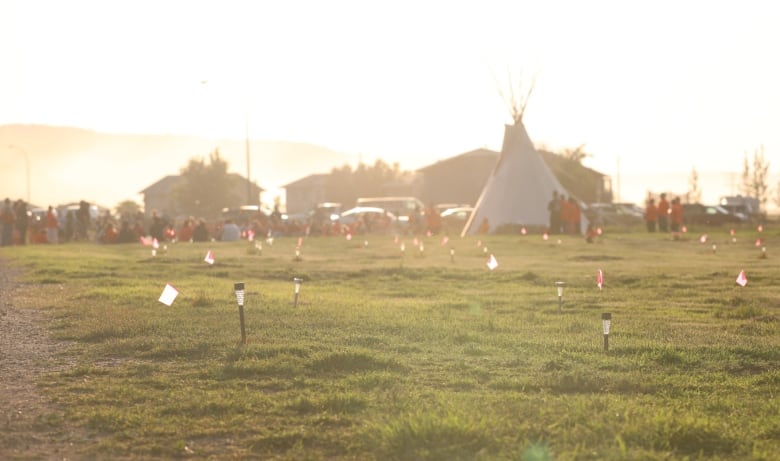 Phyllis Kretschmer has never shared her residential school experience with anyone.

The active senior, who turns 85 at the end of July, is a longtime advocate in Regina with her group Intercultural Grandmothers Uniting.

This time, Kretschmer is stepping forward on her own after decades of putting her experience in residential school behind her because it was too painful.

Sitting on the back deck of her Regina home, she holds a small stack of newspapers featuring front-page photos of the old Marieval Indian Residential School.

In June, Cowessess First Nation leaders announced 751 unmarked graves were located on the grounds of the old school site, located on Cowessess. Since then, memories of the years Kretschmer spent at the school have resurfaced.

Taken from a happy home

Kretschmer points out the windows of her old dormitory in one of the old photos.

She closes her eyes tightly, determined to remember as much detail as possible, while listing specifics about the school including names of former classmates.

Although many of her stories are hard to hear, they’re also filled with tidbits of history: the pass system, Indian agents, food rations, Indian hospitals and outlawed ceremonies.

In 1942, Kretschmer was like any other happy-go-lucky seven-year-old excited about starting school.

“I wasn’t picked up to go there,” she said. “I just knew I had to go to school and I was glad to go. I was the oldest one of the family.”

Born and raised on the Kahkewistahaw First Nation, Kretschmer was taken to the Marieval Residential School because it was the only one nearby. Her home life was happy and healthy. She was loved not only by her parents, but her extended family, especially her grandmother, Sophie.

The school proved to be nothing like she imagined. It was a cold place, devoid of any heart. Punishment and humiliation were commonplace.

For six years, Kretschmer’s days were filled with catechism and cleaning. She said the education component was almost non-existent, but she did learn to read and write.

“We never learned anything about our culture, or to be proud of our identity,” said Kretschmer.

For a young child, residential school was not only a lonely place, but a frightening one.

Kretschmer still doesn’t understand how adults could treat children so harshly. She said the worst part of the ordeal was never knowing why things happened, especially the abnormally cruel punishments.

Kretschmer said she was often used as an example and she didn’t know why.

She recalls quietly asking to borrow a fellow student’s eraser after the nun said no talking. As a result she was sent to the “Keeper,” the girls’ supervisor.

Kretschmer said she received a strap along both hands and forearms.

The beating stopped after the strap got caught on the Keeper’s rosary and it broke.

“The kids were crying because they saw me getting a strapping,” said Kretschmer. “I dealt with it. I cried. But that wasn’t enough punishment.”

She said she was forced to sit in the middle of the floor during recess for at least two days while other kids played.

“I felt so hurt, so humiliated.”

We never learned anything about our culture, or to be proud of our identity.– Phyllis Kretschmer

Kretschmer said the only thing worse than being punished was watching it happen to other children.

She recalls watching one boy have his hair shaved off in front of everyone as punishment for running away from school.

Even more traumatic was witnessing an older relative being beaten on her bare bottom in front of everyone. Seeing the rage in the priest’s face as he struck her cousin repeatedly is a memory Kretschmer can’t forget.

“I don’t know if she had her period or what, but there was blood on the floor,” she said, choking back tears.

She longed for the comfort of her family during the long months spent at school.

Kretschmer also remembers getting sick at the school. Instead of being sent to the Indian hospital, she was quarantined. Her mother went to the school to check on her, but they weren’t allowed to see each other.

“I just wanted to hug her, because I knew if I could just hug her I would get better,” she said. Instead, they waved and blew kisses through her dorm window.

Kretschmer said it wasn’t violent every day, and the kids found time to enjoy one another’s company, as they often do.

However, she said her fondest memory is of finally being able to leave the school.

One day, her dad showed up in the middle of the school year and said she was needed at home to help care for her mom, who’d just had a baby.

She said watching her father be so stern with the priest filled her with pride. Since she was almost 14, the principal consented.

She enjoyed being home with her family and credits them with helping her make it through her time in the school without losing her identity.

When Kretschmer was a young adult, there were no jobs on the reserve, so she left and made a living as a housekeeper and nanny until she met her husband in the late 1960s.

She raised her daughter in an environment free from the violence she experienced and witnessed as a child.

Hope for a better future

Visiting the old school grounds and listening to young leaders like Cowessess Chief Cadmus Delorme has given her the strength to share her story.

Almost all the people she knew from her school days have died, so she feels compelled to share as much as she can about what it was like.

Kretschmer said the school did not break her spirit, because with the help of her family, she never forgot who she was.

She knows the past cannot be changed, but says it also should not be forgotten.

Kretschmer wonders how different things would be today if the schools had actually provided an education and if those who ran the facilities had treated the children with kindness.

She’s hopeful that the renewed public interest in residential schools will lead to real and meaningful changes.

The Missionary Oblates of Mary Immaculate operated the Marieval school for most of its nearly 100-year history, along with many other residential schools across the country. The Oblates issued a statement on June 24, marking a “formal commitment” to “disclose and not block access” to records from all schools with which they were involved.

“We remain deeply sorry for our involvement in residential schools and the harms they brought to Indigenous peoples and communities,” the statement said.

Kretschmer says today’s youth give her confidence that they will build a better future because she says they are stronger, more educated and fierce.

“They aren’t afraid to speak.”