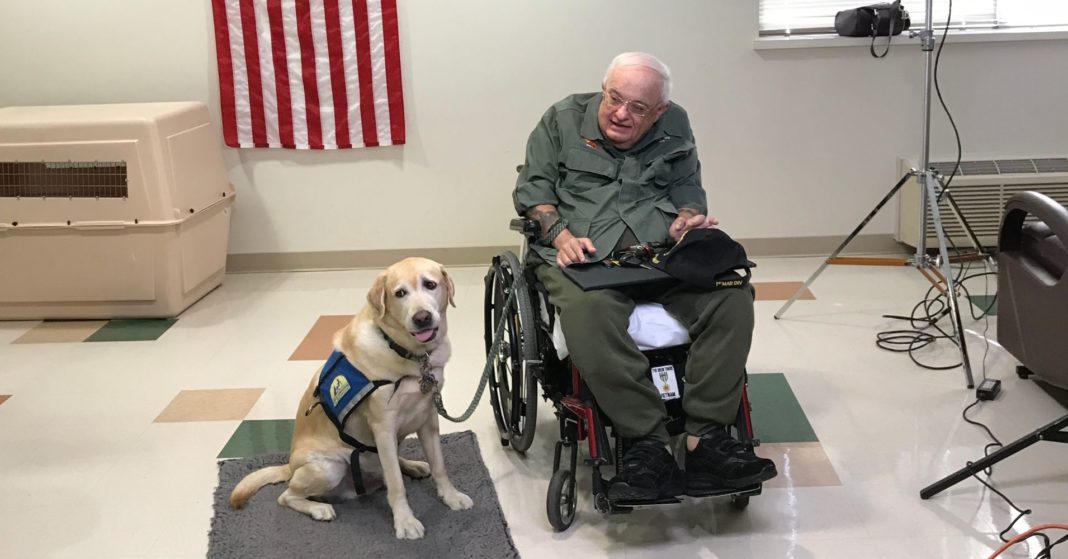 Like so many people, Matt Raible has a special bond with his dog, Jason. But for Raible, Jason is so much more than just a companion. He means freedom.

“Independence on a level you wouldn’t believe,” Raible told CNBC’s “On the Money” about his life with Jason. “There’s a myriad of things he can do, so it makes life a lot easier for me.”

In May 1968, Raible had his spinal cord damaged in Vietnam while serving as a marine, when a mortar round landed next to his position standing radio watch. His wounds were extensive, leaving him paralyzed.

While in rehab in California at age 30, he said he saw a service animal helping a man in a wheelchair, something he’d not seen before, and didn’t know was an option. Today, Raible is working with his third service dog, paired with the veteran through nonprofit group Canine Companions for Independence (CCI). He told CNBC that each dog helped him navigate life after war in new and meaningful ways.

The group provides assistance dogs free of charge to adults, children and veterans like Raible, who are disabled.

“Veterans returning after having served are trying to navigate a very, very challenging transition, a transition that a lot of us can’t really even imagine,” said Ellen Torop, CCI’s Northeast Regional Program Director.

“The dogs are trained to do certain tasks to help them move through life without having to ask for help, without having to wait for help and giving them that sense of security, and ability to rejoin life,” she added.

CCI has more than 2,200 active graduate teams across the country, with 227 dogs placed supporting veterans. The dogs are trained to respond to more than 40 commands, and train for nearly two years before starting to work with a person in need.

It costs some $50,000 to raise and train the animals from birth to retirement. CCI covers those costs with donations, and raises the dogs while training them.

Those who have been selected to receive a service animal are also required to come and train with the animal at a CCI facility for two weeks, to match with a dog and learn how to work together. Once the dogs have been matched with a person in need, recipients are responsible for veterinary care and food costs.

“What we are known for are the matches that we are able to make — the longevity and the quality of those matches,” said Debra Dougherty, executive director of the Northeast Region of CCI.

“We take a lot of time, thoughtfulness and get a very deep understanding of somebody’s needs and their lifestyle,” she added. “And as we are training the dogs we are thinking about that so that we can make an appropriate match and enhance their lives.”

The organization is also beginning to train animals to work with individuals suffering from Post-Traumatic Stress Disorder (PTSD), creating a perimeter around a person to establish safe boundaries, recognizing anxious behavior like nervous leg tapping and even waking a person up from a nightmare.

“In response to seeing those signals, the dogs will interrupt those behaviors, interacting in a very specific way,” said Torop. “It helps return the veteran to reality, the reality that the world really is a safe place and they have someone with them, and they are secure. It brings them back to the ability to manage their environment when they are really struggling with some very severe stressors.”

Raible said that in countless ways over the years, his dogs have helped him physically and emotionally. He’s gone on to graduate from St. John’s University with high honors, and worked for the Social Security Administration.

According to the former marine, his first dog, Agatha, saved his life on a cold winter night by retrieving the car keys from the ignition when he had fallen between his wheelchair and driver’s seat. With her help, he was able to open the van door and call for help.

When she passed away, he said he felt emotion in a way he hadn’t since the battlefield. After coming back from Vietnam, “I lost that sense of compassion” after exposed to so much death and suffering, Raible said.

“The only reason I started crying and I got my humanity back was when Agatha passed away,” he said. “The dog allowed me to experience pain again, which is part of loving. The dog gives you unconditional love.”

That same bond applies to Jason, his current companion.

“He looks out for me and I look out for him. He has my back, and I have his,” Raible said.