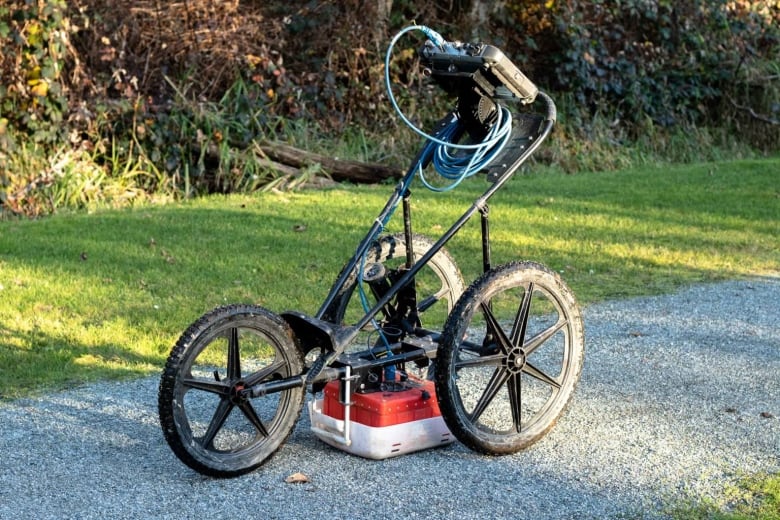 Before the first electromagnetic waves penetrate into the ground of a suspected residential school grave site, archeologists have likely already gathered key information from one of their most important sources: survivors.

Survivors will either have heard stories over the years or have direct knowledge of the site itself, said Terence Clark, an assistant professor of archeology at the University of Saskatchewan.

“We’ve heard that often children would be the ones digging the graves for other children and so they might know exactly where the graves are,” he said. “It’s not realistic to do hundreds of metres around schools in every direction. It’s kind of a needle in a haystack. But if we can talk to survivors that know specific information, then we can certainly narrow down our search.”

Understanding the process and technology of detecting unmarked graves has become a focus following the shocking announcement by the Tk’emlúps te Secwépemc First Nation last week. It said that preliminary findings from a survey of the grounds at the former Kamloops Indian Residential School indicate that the remains of 215 children could be buried at the site.

That determination was made by a specialist who used ground-penetrating radar (GPR), a geophysical survey method to examine the site. It’s technology that is often used on sites to determine the presence of underground conduits, water pipes or gas or sewer lines. But it also can be used to scan historic cemeteries and unmarked graves.

On Friday, Kukpi7 (Chief) Rosanne Casimir  said they expect to have a final report at the end of the month about the survey findings at the former residential school.

“When you’re actually walking across these grounds, I like to say that it’s a very heavy process,” Kisha Supernant, an associate professor at the University of Alberta’s department of anthropology, told CBC Radio’s Day 6.

“Of course, nobody wants to find the unmarked grave of a child. But at the same time, we absolutely do want to find that because we want to bring that closure back to communities.”

In terms of technology, survey teams will use ground-penetrating radar devices to roll across the surface of the earth. GPR is much like a medical ultrasound, but instead, high-frequency radio waves penetrate into the ground to form an image of what may be below, according to B.C.-based GeoScan Subsurface Surveys.

The device, a box about 25 centimetres wide with wheels, is pushed or pulled by a technician who scans the land in lines in a process that looks somewhat like “mowing virtual grass,” said Will Meredith, founding member and GPR specialist at GeoScan.

The device includes a radar-transmitting antenna that sends the high-frequency waves into the ground that will bounce back to the receiver if they hit anything that is different from the medium of the soil.

WARNING: This story contains details some readers may find distressing. In the days after The Tk’emlúps te Secwépemc First Nation said the remains of 215 children were found during a preliminary scan at the site of a former residential school in Kamloops, B.C., Indigenous communities across Canada have asked for similar searches at suspected sites in their territories. Three Indigenous women reflect on the importance of accounting for all the children who died at residential schools and Kisha Supernant, a Métis archeologist at the University of Alberta, explains how she uses ground-penetrating radar to help Indigenous communities carry out the work. 13:48

Supernant said that her team will lay out a square grid, about 50 metres by 50 metres, and then drag the GPR box across the surface of the ground. She said they will try to do lines very close together  — her protocol is 25 centimetres apart.

“This ensures that we’re covering all of the ground underneath the radar box itself. It is a slow process,” she said.

The device itself has to be able to touch the ground, which means before any work can be done, any brush, or tall grass must be cleared to get a good result, Clark said.

“I was just working on a project earlier this week on unmarked graves and our team spent a lot of time clearing out the brambles and the underbrush and all of this stuff so that we could actually see the ground.”

Clark said the computer can reassemble all of those lines and look at the results in three dimensions.

“It’s really tricky. If you’re going through a very small grave and you only get a tiny bit of it in one pass, the next pass will get the rest of it. And then you can figure out exactly what’s going on there,” he said.

The technology, however, cannot pick up organic matter, meaning it will not be able to determine whether skeletal remains lie below.

Over time, bones will absorb the minerals out of the soil and become very similar to the soil, said Steve Watson, owner of the Ontario-based Global GPR Services Inc.

If it’s relatively a new burial, within a couple of years, a technician may be able to identify the bones or identify an object that looks like a bone, he said.

Instead, technicians will be looking for “turned soil,” Watson said.

Soil is made up of micro layers, and when a shovel is put in the ground, “you mix that soil electrically, it becomes different to the natural soil beside it,” he said.

“So that’s what we can see with GPR, the area that has turned soil.”

Clark said the way they detect burials is that they see “a very consistent stratigraphy, everything is the same.

“And then we see basically an area that has been dug up,” he said. “So we get this anomaly. It seems to be quite a bit softer than the soil around it.”

Still, surveying unmarked, unplanned graves with no specific orientation can be a challenge, Clark said.

“There’s a lot of things close to the surface like roots and gopher holes and all sorts of things that can confuse what’s going on in that top 30 or 40 centimetres,” he said.

“There could be a burial in one location and then 30, 40, 50 years later, since it’s not marked, there may be another burial that intersects with that.  And so they’ve become much more complicated to figure out exactly what’s going on.”

Supernant said they are very careful when relaying to the broader Indigenous community what they have found, and making sure to explain that if they have found something, that it’s a grave shaft, not human remains.

“So not a body. It is not an X-ray, we can see the shaft. If there’s a coffin, we sometimes can detect the coffin in the signal,” she said.

“We can usually tell right then and there if we’re finding things or not. It takes some additional processing to confirm that what we’re seeing is likely a grave. But we’ve done enough of these now that you’ll see that the change in the signal and it can often point to something is happening.

“And that’s both heartbreaking, but also the reason we’re there.”