‘How I made fathers in Senegal carry babies on their backs’ 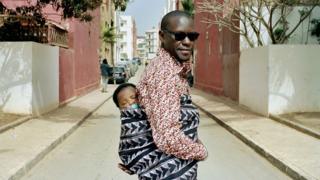 Marta Moreiras and the subjects of her portraits – fathers carrying babies on their backs – were surprised by the attention they attracted as she took their photographs on the streets of Senegal’s capital Dakar.

“People were clapping – sometimes it was a bit hard to take the picture because we were having such a large audience,” the Spanish photographer told the BBC.

“All the women were like: ‘Hey, give me five, I’m going to call my husband – we don’t see this every day.”

And that is exactly why Moreiras started her project, which has been shortlisted for the portraiture category of this year’s Sony World Photography Awards Professional competition.

The idea came to her when she was looking through her photo archive, which for Senegal goes back to 2008.

“I realised that I had tonnes of pictures of mummies with babies on their back, but I just wondered why I didn’t have any of men.”

When she began phoning up some of her male Senegalese friends who had babies, most said that they would carry children on their backs if they were at home – but never outside.

“There’s a big division here between public spaces and private spaces… and it’s very important what others think of you,” says Moreiras.

Yet her research and interviews revealed that men do play a significant child-caring role, not least because Dakar is expensive and couples often both have to work.

“That will force them to start dividing tasks.

“And when I asked the men if they actually participated in the education of their children and if they helped at home they were like: ‘Well, yes I’m forced to, my wife, she works as well – she can’t just take on all the different tasks.’

“But whenever you see a picture of a baby you never see a dad with them or playing with them or taking them to school or washing them,” she said.

This is how she first coaxed her interviewees into having their portraits taken.

When they agreed to that, she’d say she would like the baby to be on their backs instead of in their arms – this too they happily agreed to, hesitation only setting in when she asked them to move outside to give the portrait “a more interesting setting”.

“We don’t do that, we don’t take children to the street on our backs,” was the general response – but Moreiras’s persistence paid off.

“The whole reaction on streets was very cool, so the guy I was photographing began to feel more comfortable about it.”

The portraits she shot over a two- to three-month period were exhibited last May at Dak’Art, the African Contemporary Art Biennale, when the whole of Dakar becomes an art gallery.

And they certainly became a subject of debate – given the inspired decision to stage her exhibition at les parcours sportifs – a big open space on the main seafront thronged by those in pursuit of the body beautiful as it is full of gym equipment.

“Ninety-nine per cent of people who go there are men, showing their masculine, macho side,” she said.

But they were also of an age when they were becoming fathers – the perfect target audience, says Moreiras.

One photo in particular had a great impact as it was of a popular rapper, Badou, known for his machismo.

“He has a public image, and everyone recognises him. It’s important in this project that some recognisable people are included to be role models and open the debate to realise there is nothing wrong with it,” the photographer said.

There were some public figures who turned her down when she approached them as they were concerned about public attitudes.

For Moreiras, who has eight of her portraits from the series in the World Photography Awards, it will be a “never-ending project”.

“I’m still working on it – I’m happy to have as many daddies as possible because I believe that to destroy this stereotype of mums with babies, that we have seen forever, we need to do at least the same amount of images with men.”

Winners of the 2019 Sony World Photography Awards Professional competition will be announced on 17 April 2019. All shortlisted series will be exhibited at Somerset House in London from 18 April until 6 May 2019. 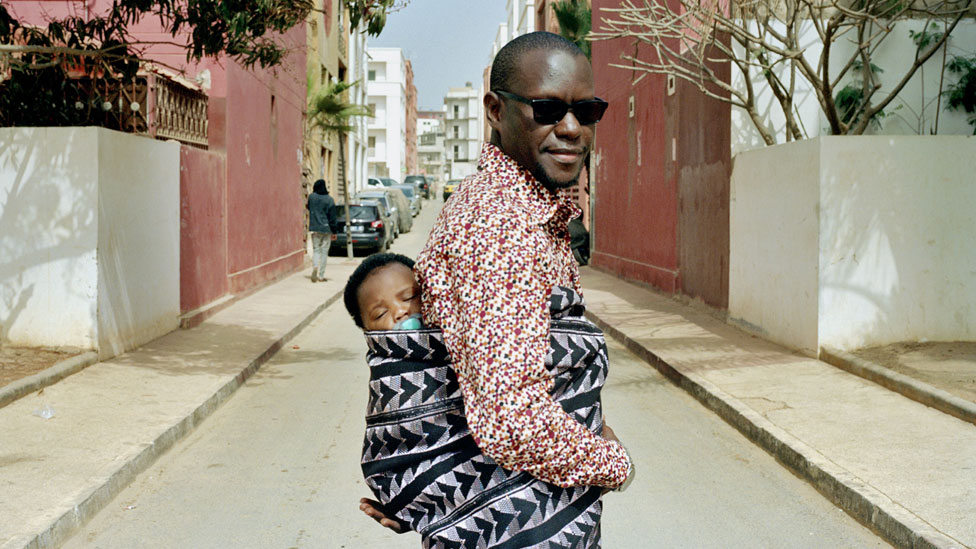