How does N.L. avoid economic ruin? A leaders’ debate offered some answers 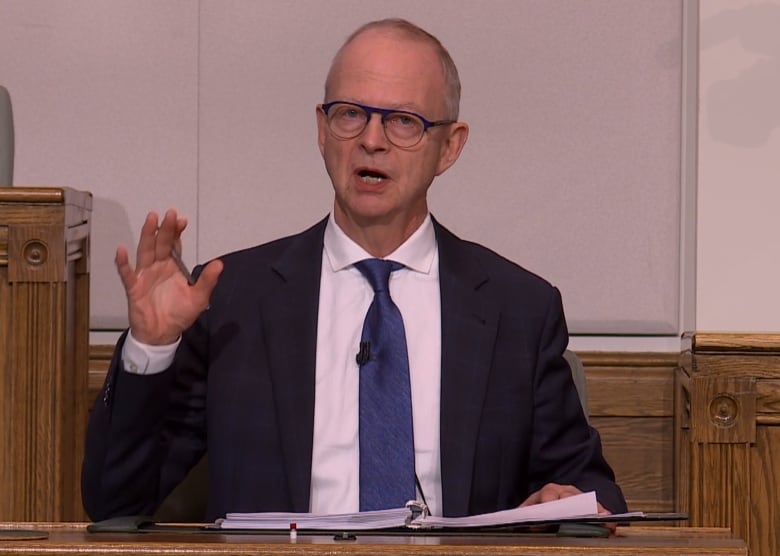 How can Newfoundland and Labrador avoid total economic ruin?

Amid fleeting moments of levity — and plenty of accusations across the board — the province’s three major party leaders set out their visions Wednesday night in a debate.

Despite their disparate platforms, all three returned time and again to the single theme of debt.

NDP Leader Alison Coffin, PC Leader Ches Crosbie and Liberal Leader Andrew Furey — who was sworn in as premier last August — have competing ideas about how to pull the province back from the financial brink. In an unscripted hour at the House of Assembly, they each attempted to coax the public into endorsing their solutions.

Here are the key takeaways.

How much is your labour worth?

Sixteen billion dollars. That’s the approximate size of the financial hole any elected government has to fill.

Coffin addressed that provincial debt indirectly, but immediately, coming out strong on a question about minimum wage, her party’s flagship campaign issue.

Coffin accused Furey, and the government of Dwight Ball before him, of a “shameful” decision to offer incremental hikes rather than introducing a strong baseline from the outset. (The minimum wage is scheduled to hit $12.65 an hour in October, after two years of twice-annual raises.)

This is not the place to come for cheap labour

That was “a lost opportunity,” Coffin said, framing her party’s $15 minimum as “reasonable — it is not even a living wage.”

“There are many different tools that we can use … and hanging it all on one particular wage is not right,” he said, referring to education and child-care support.

Furey then tried to distance his party from the argument, insisting that responsibility for setting the rate lies with an independent review panel. “That takes the politics out of it,” he insisted.

“It’s not a political decision.… Right now, we’re right in the middle of the country with respect to minimum wage. We want to make sure we’re offering competitive wages, so we can use that as one of the tools to help get people out of poverty.”

“We do not want to be known as the place where you can come and get cheap labour,” Coffin shot back. “Let’s not abdicate our responsibility and give it over to a minimum-wage committee.”

To cut or not to cut

Crosbie led, wherever possible, with a dichotomy: that a vote for the Liberals was a vote for cuts in government spending, while endorsing the Tories would result in growth.

“The premier has talked about everything being on the table,” Crosbie said dryly. “If I were living in Newfoundland and Labrador, I would be concerned.”

Crosbie pivoted immediately to a jab about last year’s hiring fiasco at the museum The Rooms, the province’s leading cultural complex. Carla Foote, the daughter of former Liberal cabinet minister Judy Foote, was the subject of a hiring scandal in the Ball government when she was moved into a well-paid executive role at The Rooms.

“We should look at patronage hires — for example, Carla Foote,” Crosbie said.

He also said, “If we’re talking about trimming and cutting, we should look at Nalcor bonuses,” a reference to executive compensation at Nalcor Energy, the Crown corporation responsible for the Muskrat Falls hydro-electric project.

Furey, who according to his staffers took two days to prepare for the debate, came armed with tidbits of memorized data, but held his own when it came to the specifics, slipping into technical terms at various points to describe his negotiations while in the premier’s seat.

He also insisted he would not resort to public sector layoffs to fortify the provincial coffers — at least, not in the short term. “Now is not the time to take jobs out of the economy,” he said.

“There’s no question we have structural issues moving forward. However … there’s no magic solution. Mass layoffs are not the answer. We didn’t get into this fiscal predicament on the backs of hard-working nurses and public servants of our province.”

Power for the people

The CBC’s Peter Cowan asked a deceptively simple question halfway through the debate.

How do we know, he said, you’re actually working for the people?

Going on the offensive, both Crosbie and Coffin alluded at several points to Furey’s election timing — a sticking point throughout the campaign.

Both leaders have criticized Furey’s decision to trigger a vote ahead of the economic recovery team’s non-binding recommendations to fix Newfoundland and Labrador’s debt troubles. Furey, once again, defended his decision.

Our platform is fully costed. I noticed yours wasn’t.

Coffin took the opportunity to jump on the Liberals’ absent campaign platform. (The NDP released theirs just hours before the debate.)

“Are we just going to wait for dribs and drabs of announcements to come out? Or will you give us the full platform? [People] deserve to know what they are voting for,” Coffin said.

Furey snapped back, cutting Coffin off at the edge of her allotted speaking time.

“Your platform that you released today, Ms. Coffin, was a series of media releases,” he said. “Our platform will be out tomorrow, fully costed. I noticed yours wasn’t.”

(A Liberal staffer confirmed to CBC the party would unveil their platform at 2 p.m. NT Thursday.)

Sticking up for the sidelined

The spectre of racism plagued the Liberals last year, most recently through comments made by Lake Melville incumbent Perry Trimper, who said that homeless people in his central Labrador district were choosing that lifestyle.

The Innu Nation denounced the comment as racist, and Trimper — who earlier quit a cabinet post after a recording was released in which he criticized the Innu as playing the “race card” against him — is now running as an Independent.

Furey wasn’t offered a chance to respond to two questions about addressing discrimination and improving mental health services, but Coffin and Crosbie were — and Crosbie saw the opening to remind the public of past Liberal scandals.

“We live with a terrible history of racism. We need to have a zero-tolerance policy for racism,” he said. “It’s not something we can tolerate, like we’ve seen right here in the House of Assembly.” 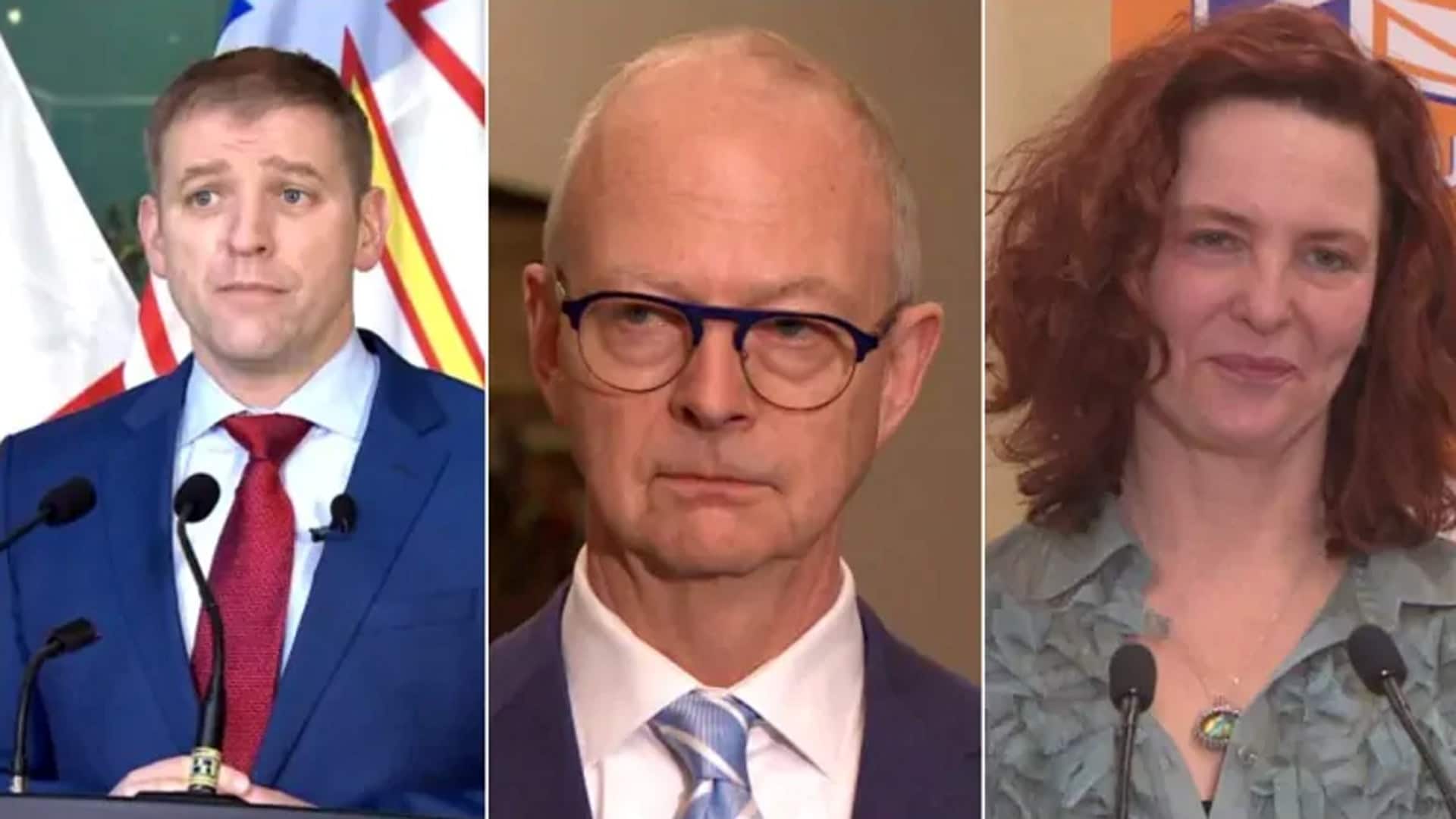 Coffin turned her sights to representation on the Assembly floor.

“I’m very proud to say that 18 per cent of … NDP candidates are Indigenous,” she said. “They are going to be able to guide our policies and discussions in a far better way than I will be able to do so.”

“We understand, intuitively and by experience, that when people have an economic lifeline, when they feel their future is secure … then mental health issues are much more controllable,” he said.

“Perhaps we do need jobs, but they ought to be the people who provide mental health services,” Coffin replied.

At the end of the day, digging the province out of its economic hole will require co-operation with the feds — and Furey tried his best to frame Crosbie’s approach at the bargaining table as counterproductive.

Furey immediately pointed to almost a billion dollars his government has secured from Ottawa.

But that $840 million, Crosbie said, is “just another can they’ve kicked down the road” — money that has to be repaid later.

Furey pivoted to Crosbie’s dire warnings to the federal government. “Mr. Crosbie is campaigning to be the last premier of Newfoundland and Labrador, telling people he’s going to declare it bankrupt as soon as he’s in the premier’s chair,” he said.

Furey said he’s taking a collaborative approach. In contrast, “Mr. Crosbie wants to sue [the federal government],” he said. “How can you start a serious negotiation in earnest with our federal partners if you’re using language like that, sir? That’s irresponsible language and it’s playing chicken with people’s paycheques.”

In 35 years as a lawyer, Crosbie said, he’s used to bargaining.

“I’ve negotiated many settlements with lawsuits in the background. That’s just how you get business done.”