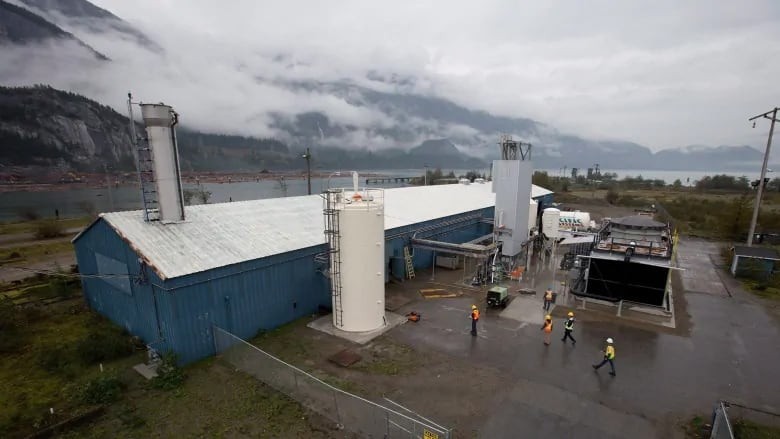 Carbon capture is often talked about as a climate solution, but a growing chorus of experts caution it may not be that effective, and in some cases could even add to greenhouse gas emissions.

But recent study of carbon capture processes casts doubt on their efficacy in reducing overall emissions.

In fact, a lot of captured carbon is being repurposed to extract more oil and gas.

“People have heard about carbon capture, they have this sort of warm and fuzzy idea that … this can be something good to save us. And that’s because they have this impression that we can have carbon-neutral fossil fuels,” said June Sekera, a policy expert and visiting scholar at the New School in New York and senior research fellow at Boston University.

Sekera and a colleague reviewed 200 papers on the topic, including direct air capture and point-source capture. While captured carbon can be stored in a number of ways (including underground and in concrete), it is estimated up to 81 per cent is used in a process called enhanced oil recovery (EOR), a decades-old practice to extract remaining oil from an oil field.

The oil industry has touted this process as win-win — more efficient extraction and reduced emissions. Some research suggests that the EOR process could store about half of the carbon dioxide used to extract oil. But that means it still emits more CO2 than it captures.

“A carbon removal process can be labelled as ‘net-negative’ when it removes more carbon dioxide than the emissions required to achieve that removal. But in the case of enhanced oil recovery, the extraction of oil is not in service of carbon removal,” said Andrew Bergman, a PhD student in applied physics at Harvard University who contributed to a new book on CO2 removal and is helping develop carbon removal technology.

“Talking about the ‘carbon content’ of oil extracted using enhanced oil recovery obscures the fact that [it’s] a process, very simply, for extracting oil,” said Bergman via email. “Oil itself cannot be net-negative. Oil is oil.”

Rather than assume we can replace other oil extraction with this particular method, Sekera said we should push for public policy measures to reduce the demand for oil.

“We need energy,” she said. “We don’t need fossil fuels to be that source of energy.”

By extending the life of fossil fuels, Sekera worries it will delay the switch to renewable energy. It’s a concern shared by Dale Marshall, national program manager with the organization Environmental Defence.

“Any time a government talks about fossil fuels being some kind of a bridge to a future sustainable world or a stepping stone to dealing with climate change, essentially what that means is we’re going to delay the phasing out of fossil fuels,” said Marshall.

Direct air capture technologies that filter carbon dioxide from the atmosphere have been demonstrated at a small scale — including ClimeWorks in Switzerland and Carbon Engineering in B.C. (see photo above). But they would require massive amounts of renewable energy in order to take more emissions out of the atmosphere than they emit.

Some suggest that while we need to quickly shift to renewable energy, we should also think about how carbon removal, like direct air capture, could fit into the larger emissions-reduction picture.

“Fossil fuel companies [being] involved in carbon removal is controversial,” said Shuchi Talati, a senior policy advisor with Carbon 180, a D.C.-based NGO. While she acknowledged that this sort of technology may be important in the interim, she said “the public should benefit from [carbon capture] technology.”

Talati said regulation and transparency of carbon capture would allow governments to procure carbon storage as a public service.

“In my ideal future, none of this carbon would be going towards enhancing the [oil] recovery,” she said. “It would be stored underground. And that’s really how you benefit from that captured carbon — when you permanently lock it away, whether it’s underground or in materials like concrete. I think using it for [oil] recovery is not a way that the public can profit from those actions.”

A reader named Urbano had this to say:

“Thank you for the article about green habits on the rise. May I also suggest you write one on the rise of groups such as the Buy Nothing Project. My neighbourhood Buy Nothing group has grown so much we recently had to split into several smaller groups.

“During the time I’ve belonged, I’ve seen food and tool sharing, people getting together to help neighbours in need furnish their apartments with items they no longer have need of and many smaller acts of sharing, such as passing on clothes no longer worn or household items they never use. In addition to building community, this means hundreds of items — even food — are not ending up in the waste stream.”

In response to an item in the last newsletter about plastic pollution at a Serbian hydro-power plant, Debra Hayes said, “When I look at photos like those taken of the plastic-clogged Serbian dam, I think we are the plague and COVID is here to save the Earth from us.”

There’s also a radio show! This week, What on Earth asks: Does sucking CO2 out of the air live up to the promise? From capturing carbon at industrial plants to filtering it from the air, join host Laura Lynch for a look at what it all means and if it is a viable part of our climate future. Listen to What on Earth on CBC Radio One on Sunday at 12:30 p.m., 1 p.m. in Newfoundland, or any time on podcast or CBC Listen.

The Big Picture: Cities leading the charge on climate action

Reducing carbon emissions and addressing the ancillary impacts of climate change are monumental tasks that require co-operation across jurisdictional boundaries. Let’s face it — that often doesn’t happen. Governments at the national level have the money and legislative sway to address many environmental challenges, but they don’t always demonstrate the will, which is why lower levels of government often feel compelled to act. Cities are hubs of social, economic and environmental activity, which is why several years ago, a number of them banded together to form C40, “a network of the world’s megacities committed to addressing climate change” (their words). The list includes places like Paris, New York, Shanghai and Addis Ababa — as well as Montreal, Toronto and Vancouver. C40 cities have taken bold steps on initiatives like renewable energy, reducing building emissions and phasing out plastics — always with an eye on sharing knowledge.

Can Wall Street help us find the true price of water?

You could be forgiven if, amid the recent chaos of COVID-19 and U.S. politics, you missed some news related to what is arguably Canada’s most valuable natural resource.

Just before Christmas, the CME Group, the New York-based market operator that takes its name from the Chicago Mercantile Exchange, began trading water futures. For the first time, Wall Street traders are now able to take a stake in the future value of water the way they have with other agricultural and mineral commodities.

As with gold or pork bellies or natural gas, commodities speculators may see it as a kind of sophisticated gambling on derivatives. But the intent of the new water futures market is to share the risk of unexpected price swings for farmers and other water users.

While traded in North America’s financial capital, so far the water contracts being bought and sold are limited to five water districts in drought-prone California. But it could expand well beyond the Golden State.

Water remains big business. But the idea of the wet stuff as something to be bought and sold by Wall Street speculators does not necessarily sit well with those who study the economics of this resource in Canada.

“I find it quite disturbing,” said Jim Warren, a Regina-based scholar and author of Defying Palliser: Stories of Resilience from the Driest Region of the Canadian Prairies.

Water has always been seen by economists as a special case. Like the air we breathe, it is more valuable to human life than gold or oil or even, in the short term, food. But because of its relative abundance, water’s traditional price in Canada has been close to zero.

“It wasn’t as if there were public auctions,” said Warren. “At the curling rinks and coffee shops, you sort of figured out what it might be worth to sell some of what [you] had to others.”

The situation demonstrated how water was already being commodified.

As a provincial resource under the Constitution, there is no single set of rules for water use in Canada. However, the general rule is that water cannot be bought or owned. Instead, it is allocated by provincial regulation.

Diane Dupont, a water economist at Brock University in St. Catharines, Ont., said in most cases, the water itself costs nothing for municipal and large industrial users — and that creates problems of its own.

“Typically, they’re paying a very low fee,” said Dupont, author of Running Through Our Fingers: How Canada Fails to Capture the Value of its Top Asset. “They’re not paying the value of the water.”

Despite the apparent abundance of water in Canada, she said, low prices mean the best-quality water in many regions is in increasingly short supply and being overused.

Roy Brouwer, executive director of the Water Institute at the University of Waterloo, said that introducing various market price systems might fix that.

Of course, in the past, leaving speculators in charge of the price of essential goods — such as when Enron helped bid up the price of gas and electricity in the early 2000s — has sometimes worked out badly for end users.

“If you leave it completely to the market, you might end up with some of these extreme situations,” said Brouwer. “Somewhere in between considering water a human right and the commodification of water through these water markets is probably where you want to be.”