Homicide investigators and fire crews were on scene of a home in Kincora, where two people were found dead on Saturday. (Terri Trembath/CBC)

Calgary police’s homicide unit is investigating after two people were found dead and a woman critically injured following a fire and explosion at a northwest Calgary home on Saturday.

Emergency crews responded to reports of a house fire and explosion at approximately 1:50 p.m. at 42 Kincora Drive N.W.

Two people were found dead inside the home and one woman was taken to hospital with burns in serious, life-threatening condition.

The fire is not believed to be accidental and the incident was a domestic one, police said in an emailed release. No suspects are being sought at this time.

Police said the explosion was largely contained within the home’s garage, and the fire from the blast didn’t spread to any nearby homes.

At least one person has been injured in the explosion, police said. (Nathan Ma)

The garage door of the home was was visibly damaged.

Fire crews have searched the home and did not find any additional victims.

The fire department asked the public to avoid the area between Kincora Landing and Kincora Boulevard as they responded to scene at 2:15 p.m. Saturday.

Police said further information likely will not be released until autopsies on the two victims are completed on Monday.

Anyone with information is asked to contact Calgary police’s homicide tip line at 403-428-8877. 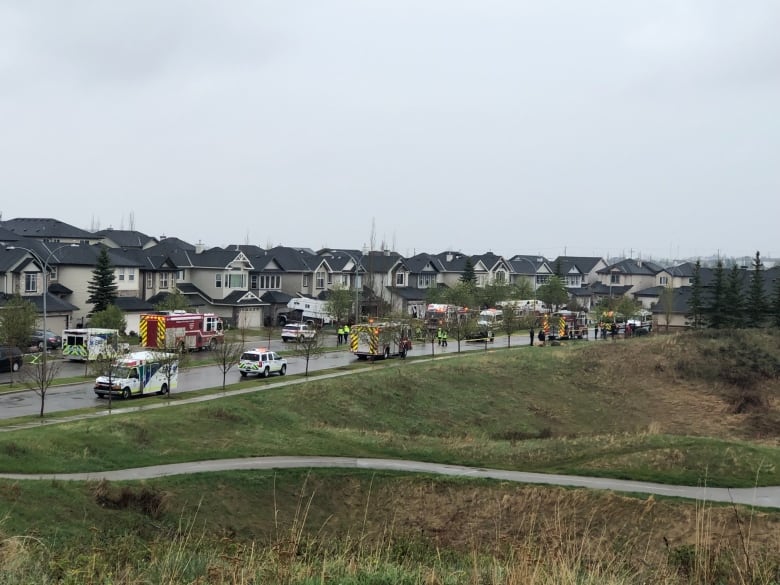 Emergency crews were on scene at Kincora Drive Saturday after an explosion. (Cori Timmerman/Twitter)