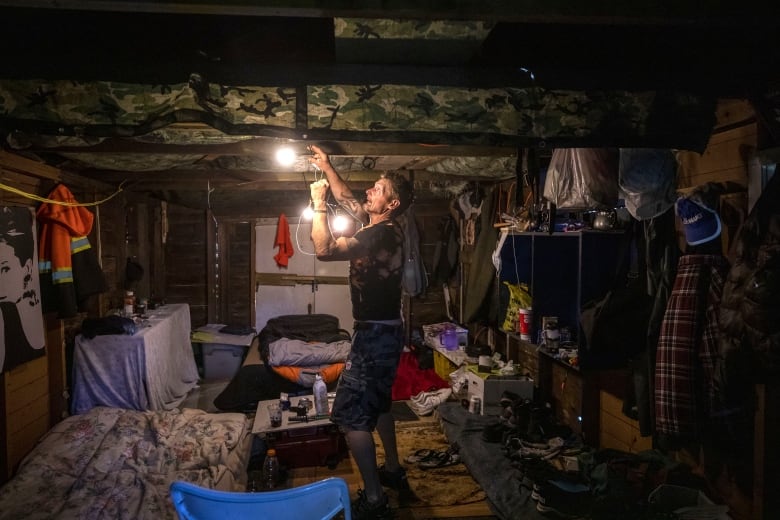 There was no job interview when Gordon Petrie became the caretaker and security guard at Holy Cross Ukrainian Catholic Church in Surrey, B.C.

Church leaders didn’t even know he was living on the property on 108 Avenue near Whalley Boulevard, until one of the parishioners checked the surveillance cameras sometime in March and spotted a stranger sweeping the parking lot.

“At first, we were concerned we had a homeless man living in our shed,” Hitchen said. “But once we had a few conversations with him and got to know him, we realized that he’s a really, really good guy.”

Hitchen says Petrie chases away thieves, trims hedges and mows the football-field-sized lawn, which was especially appreciated when the grounds were closed during the pandemic.

He’s also become a friend, which is why they’re both heartbroken that Petrie will soon have to leave.

Petrie, a 50-year-old bricklayer by trade, fell on hard times three years ago, when he lost his home, got in trouble with the law and wound up living in a tent.

“The worst part was the rats,” he said. “They’re filthy, and they chew through everything.”

Sometime in March, he moved into the empty shed, and when Hitchen found him, he thought for sure that he’d be ordered to leave.

Instead, Hitchen was so impressed with Petrie’s work ethic that he asked the parish to fix up an old house on the property that has been vacant since a priest moved out a few years ago.

“He’s a good man, and he came to see that I was harmless,” Petrie said. “I wasn’t making a mess.”

A city bylaw officer recently informed the church that the rectory must be boarded up and fenced-in if no one is living in it.

“There was an opportunity for a win-win situation here,” Hitchen said. “We could have Gordon look after our property and in exchange have him living here.”

Hitchen went to the church eparchy and asked if the parish could do basic renovations so that Petrie could move in. (An eparchy is a parish or religious territorial area governed by a bishop of one of the Eastern churches who holds the title of eparch.)

Father Richard Soo, who speaks for the bishop in charge of the church, said it would be an unsafe arrangement.

Soo said the bishop moved the parish priest out of the home in 2017, because there was black mould inside and there have been complaints in recent years about vandalism to the home.

“If it wasn’t fit for one of our own people, how could it be fit for Mr. Petrie?” Soo said. “The bishop encouraged the parish to find another way to help Petrie.”

“They’re worried that I’m going to get sick living in the house because of the mould,” he said. “Do you see where I am now? It’s a lot worse.”

Petrie hasn’t thought much about where he’ll go when he’s forced to leave the property, mostly because he wants to keep his thoughts positive.

When pressed, however, he says he’ll likely end up back in the bush living in a tent.

“It’s summer now, so you don’t really need a roof over your head,” he said. “A tent is nice, because it stops people from being able to walk right over top of you.”

Hitchen hopes there’s a person out there with a big heart and a spare basement suite who might be able to help out his friend.

CBC Vancouver’s Impact Team investigates and reports on stories that impact people in their local community and strives to hold individuals, institutions and organizations to account. If you have a story for us, email impact@cbc.ca.