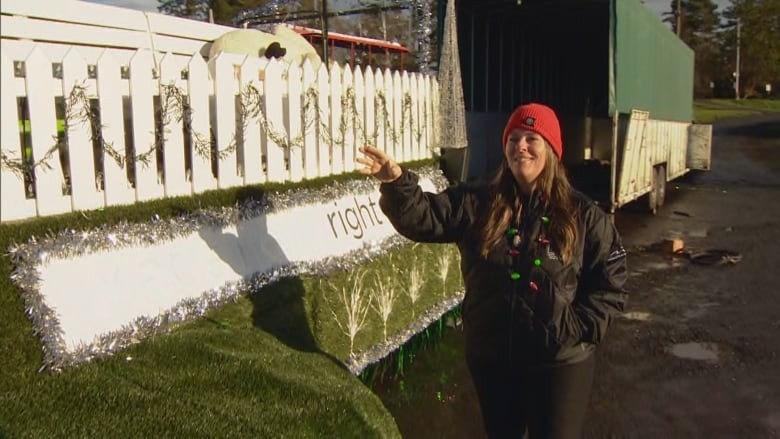 When Victoria’s Santa Claus parade had to be cancelled due to COVID-19, the Greater Victoria Festival Society came up with a Plan B for the floats and decorations: Use them to attract attention to drop-off locations for food and toy banks.

But new health orders last month, which banned drop-off events, put even that effort in jeopardy

“Being able to support the food in the toy banks was something that was really important to us, and so we worked really hard to collaborate with other organizers,” said Kelly Kurta, executive director of the Greater Victoria Festival Society.

“And then having it cancelled or ‘Santa-paused’ was very, very frustrating.”

“I did cry when Dr. [Bonnie] Henry said that we could, you know, have the drop-off donations for the food and toy banks,” Kurta said, referring to B.C.’s provincial health officer. “I actually think we’re going to be able to do more than we do in a normal year.”

With COVID-19 bringing a year of layoffs, isolation and other hardships to many, charities consider their work more essential than ever. And while some are seeing a rise in volunteers and donations, pandemic restrictions have made the work of others an extra challenge.

‘The need is very high’

Jewish Family Services (JFS) in Vancouver has been handing out Hanukkah hampers to families in need for several years, but it was worried how this season would go.

Would there be enough sponsors for families? And how to deliver the donations it did receive? Having recipients come and pick up their hampers would be a challenge with COVID-19 restrictions.

But this year’s organizer, Leeya Schachter, says she has been pleasantly surprised.

“It’s amazing how people really want to help in a crisis,” she said.

“I think I had excess drivers for Vancouver especially. And I’ve had to say, ‘You’re on a wait list in case anyone cancels.'”

There was also no problem finding sponsors to fill up backpacks and baskets with food and toys, Schachter said.

Across the board, JFS says it has seen people recognize the importance of helping out at a time when the need is greater than ever before.

For example, the pop-up food bank it ran twice a month served about 450 people before the pandemic. Once COVID-19 hit, the organization had to run it weekly to meet the needs of 900 people looking for help.

A campaign in September to stock the shelves gathered enough money and food to keep the program going for six months — double what last year’s campaign brought in.

“It’s really neat to see how the Jewish community really comes together,” Schachter said. “People understand that the need is very high.”

Spike in online donations, but not for everyone

They aren’t the only organization seeing growing support. Canada Helps, a platform that accepts online donations for registered charities in Canada, says there has been a 70 per cent rise in online donations so far this year.

That increase isn’t being seen across the board, according to Imagine Canada, an advocacy group that works to support charities in this country.

“Organizations — who to the public, to government and to corporations are deemed to be serving the most vulnerable — are both seeing a surge in demand for services but also an increase in supply because Canadians are stepping up,” president and CEO Bruce MacDonald said.

His group released a report in the spring that showed 35 per cent of charities reporting an increase in demand, and the number is even higher now, he said.

But groups in the areas of arts and culture and sports and recreation are seeing support dry up while demand has risen, MacDonald said. And charities that rely on holiday events have been particularly hard hit.

“If they were relying on impulse contributions, just dropping a dollar or two into a coin box or as a commuter, taking a toy or food with you from home and then dropping it at work or at a drop box on the way…. If people are working from home, if they’re not going to shopping centres because they’re ordering online, that likely means a decline in those kinds of campaigns,” he said.

The lack of events is hitting local Christmas Bureaus hard.

“There is no tree-lighting ceremony. There’s no [Santa Claus] parade. Those are often fundraising opportunities for us,” said Surrey Christmas Bureau executive director Lisa Werring.

“There’s no third-party events being held. Toy drives have been very challenging. So it’s been quite impactful on our financial bottom line.”

She said the bureau has seen an overall fundraising drop of about 20 per cent and is running low on toys. It had to start the program in early November this year, in order to space out appointments with families because of COVID-19 precautions.

The bureau hopes to help close to 2,000 families, with well over 4,000 children. In order to do that, Werring said it has had to dramatically change its operations but was determined to do whatever it took.

“Kids had really been through enough this year,” she said. “There’s just no way that Christmas was going to be taken from them. We have to make sure Santa shows up in Surrey.”

The bureau relies heavily on volunteers, most of whom are seniors, who aren’t able to help in person because of concerns around COVID-19. So it developed an online registration system, and those volunteers switched to helping process applications from home.

Werring said the organization was then fortunate enough to have “fantastic” high school student “elves” from the co-op program at Surrey’s Guildford Park Secondary School to step in to help at the bureau.

“It’s definitely very rewarding seeing their faces and just feeling the love,” Triza Iklakh, a volunteer from the school, said.

“Especially with COVID and whatnot going on, it’s really not only rewarding to be here, but it just feels good. And just I think for the families who get to come here and just them being able to see that this is open to them.”

In previous years, families were paired up with a volunteer, who then helped them pick out toys for their family. But because of health orders, that wasn’t possible this year, so students now gather up packages of toys for each family based on wish lists the families provided.

“I was a little bit concerned about prepacked. You know, part of the beauty of the Christmas bureau is giving parents the dignity of a shopping experience and choosing their own toys,” Werring said.

“But everybody has absolutely understood the reason for this. And they’re happy that we’re looking after them, that they’re safe as well and not being exposed or putting themselves at risk during this process.”

Toys that are collected have to be quarantined for 72 hours before they can be given out, and the new and used coat drive also had to be cancelled.  But along with toys, the bureau is still able to provide gift cards for groceries to help the hundreds of families, many of whom have never come to the bureau before.

“A lot of families that had great jobs and then found themselves on CERB or other forms of assistance for much of the year. Those folks have never had to ask for help before,” Werring said.

“We’ve been very delicate in working with them and reassuring them, you know, this can happen to anybody.”