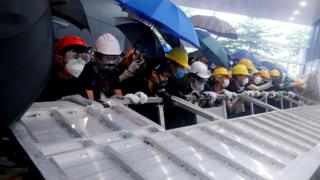 Hundreds of demonstrators forced their way into the building by smashing through doors and steel shutters.

The group are a breakaway part of a peaceful protest involving hundreds of thousands of people on the 22nd anniversary of Hong Kong’s return to China.

It is the latest in a series of protests against a controversial bill that would allow extraditions to mainland China.

The group of breakaway protesters smashed their way into the LegCo building.

Many were wearing hard hats, face masks and glasses.

Images from inside LegCo show protesters smashing up the chamber building and flying both the union jack and colonial flag.

Once they entered the chamber, the Hong Kong emblem was spray painted black and a colonial Hong Kong flag was placed on the seat of the legislature’s president.

Hong Kong is a former British colony and has been part of China since 1997 under a “one country, two systems” deal. Pro-democracy events are held every year on the anniversary of the handover.

However, the anniversary this year comes in the midst of protests against the extradition bill.

The Hong Kong emblem in the LegCo building was spray painted black (above).

Protesters also sprayed slogans onto the walls of the chamber building.

Portraits of some legislative council members were damaged and ripped from the walls. The outside walls of the building were also daubed with graffiti.

Protesters then left the building after police warned that they would “take reasonable force” to remove them from the area.

Tear gas was fired at the protesters who chose to stay in the area.