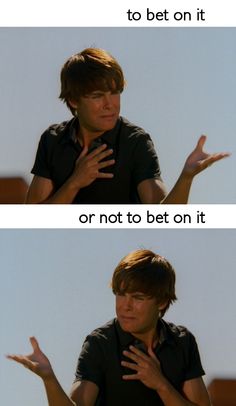 What time is it? It’s time to discuss “Bet on It,” that’s what time it is.

Believe it or not, 10 years ago today, High School Musical 2 premiered on the Disney Channel. The sequel drew a record amount of viewers—17.6 million to be exact. Fans watched as the kids from East High School summered at Lava Springs, working as lifeguards (Vanessa Hudgens‘ Garbriella Montez), activity coordinators (Monique Coleman‘s Taylor McKessie) and more. As for Troy Bolton (Zac Efron)? He swiftly got promoted from caddy to children’s golf teacher, thanks to some clever manipulation on behalf of drama queen Sharpay Evans (Ashley Tisdale).

Troy’s dramatic solo number, “Bet on It,” took six days to film; director Kenny Ortega would shoot bits and pieces of the scene whenever the production schedule allowed. The moment when Troy runs by the water, for example, was filmed the same day as his picnic with Gabriella.

Upset that the Wildcats had been deemed ineligible for the annual summer talent show, an over-the-top Troy angrily pranced around the golf course to let it all out. Ortega reveled in the drama, like when Troy jumped into the sandpit. “The tendency is you want to spring up. Don’t,” he told Efron on set. “Grab the sand. Rise up slowly. Your head brings your body up. Your eyes bring your body up.” Troy’s slick dance moves with the club were a tribute to the legendary Fred Astaire, and he swung painted tennis balls—not golf balls—to safeguard the camera crew.

While filming the song’s crescendo, Ortega advised Efron, “Think of yourself as on top of the whole world. You know what I’m saying? Don’t think of it as a contrivance or as a limitation, but think of it as this is the top of the whole world.” After they finished filming the dance sequence, Ortega raved, “It was an absolutely spectacular day. I couldn’t be happier. Thank you so much!”

In a behind-the-scenes interview with Efron included in the DVD’s bonus features, Efron talked about how he differed from his character. “In so many ways, I’m different than Troy. It’s kind of ridiculous. He’s the coolest kid in school. I was never anywhere near that,” he said. “I’m not really a dancer. I’m not really a basketball player. I’m just a kid. I sat behind a desk in school like everybody else, but I’m working as hard as I can to look comparable to everybody else. It’s fun to really step it up and see what you can accomplish. For me, dancing’s all about having fun. When you learn a dance, there’s fun in learning something new. When you watch yourself progress in a dance and watch yourself get crisper and cleaner, it’s like a constant gratification.”

“I feel like this whole experience has been crazy and surreal and fantastic and amazing,” he added. “We made something that’s fun and people enjoy watching, and it’s a fantastic feeling.”

Some Stars Who Have Tried Online Dating!