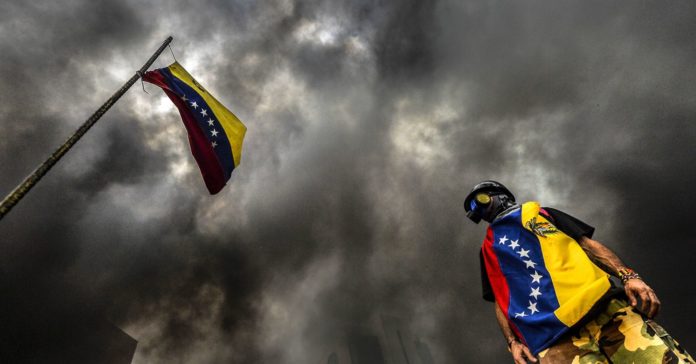 The fraught relationship between the United States and Venezuela has come to a head.

Amid a collapsing economy sparked by government corruption, social unrest and a global commodity bust, oil-rich nation faces even more uncertainty in the wake of President Donald Trump’s decision to back a Venezuelan opposition leader instead of President Nicolas Maduro.

“I am the only president of Venezuela,” Maduro said in response to a White House statement recognizing 35-year-old Juan Guaido as the interim leader of Venezuela. “We do not want to return to the 20th century of gringo interventions and coups d’état,” Maduro added.

The State Department said it would ignore the order because it “does not consider former president Nicolas Maduro to have the legal authority to break diplomatic relations with the United States or to declare our diplomats persona non grata.”

Secretary of State Mike Pompeo said Thursday that “the United States is ready to provide more than $20 million in humanitarian assistance to the people of Venezuela” in order to address the “severe food and medicine shortages.”

“The regime of former president Nicolas Maduro is illegitimate. His regime is morally bankrupt, it’s economically incompetent, and it is profoundly corrupt. It is undemocratic to the core,” Pompeo said adding that the U.S. did not arrive at this decision overnight.

These fast-moving developments have brought U.S.-Venezuelan relations to a boiling point after a nearly two-decade saga.

Tensions between Venezuela and the U.S. can be traced back to when Hugo Chavez, Maduro’s predecessor, first became president of Venezuela in 1999. During his campaign for president, Chavez villainized the U.S. and other countries he felt were taking advantage of Venezuela.

“It resonated with the voters at the time because Venezuela had a growth collapse in the 1980s, right after oil prices started to fall around the world. It never quite recovered from that,” said Monica de Bolle, senior fellow at The Peterson Institute for International Economics. “By the time Chavez came to power, people were just sick of it. They just wanted some big change to happen.”

Venezuela’s economy is tightly tied to oil, its biggest export to date. The South American nation has the biggest oil reserves in the world. In 2017, Venezuela’s oil reserves totaled 302.81 billion barrels, according to data from OPEC.

While crude prices trended lower in the 1980s and 1990s, they recovered sharply right before the turn of the century, giving the Chavez government a massive windfall to put in motion several reforms like free health care. The spike in crude also gave Chavez the capital he needed to try and undercut U.S. influence in Latin America.

In 2004, Venezuela and Cuba created an economic alliance called the Bolivarian Alliance for the Peoples of Our America. In 2005, Chavez founded Petrocaribe, a group of countries that lets members purchase oil from Venezuela at a lower price.

“Chavez used his windfall oil profits to stick it to the U.S. whenever he could,” said Jason Marczak, director of the Atlantic Council’s Latin American Economic Growth Initiative. Chavez also used the U.S. as a scapegoat for Venezuela’s troubles, Marczak added.

Chavez also accused the U.S. of aiding in an attempted coup against his government back in 2002. While the Bush administration tried to distance itself from the coup attempt, documents found in 2004 showed the CIA knew of an attempted coup back then.

The U.S. has also condemned Venezuela for imprisoning political opponents as well as the Chavez regime’s consolidation of power. Chavez seized control of the country’s supreme court in 2004. He also increased his control over the local media, passing laws that penalized outlets for running content that “offends” public officials.

But relations between the U.S. and Venezuela remained close as the U.S. is still a big consumer of Venezuelan oil. U.S. imports of Venezuelan crude oil and petroleum products averaged nearly 600,000 barrels per day in the first 10 months of last year, according to the U.S. Energy Information Administration.

Once Chavez died in 2013 and Maduro took over, tensions began to increase once again. Maduro, who is not the charismatic leader Chavez was, consolidated his power in 2017 by stripping the country’s opposition-led legislature of power. By then, a massive humanitarian and economic crisis had already begun.

Venezuela’s economy was decimated after oil prices began collapsing in late 2014. The fall in oil prices made it hard for Venezuela to keep providing subsidies for its many national programs. It has also led to a massive shortage of food and other basic goods like medicine.

This crisis has led the Trump administration to slap sanctions on dozens of Venezuelans associated with the Maduro regime, including his wife, Cilia Flores.

Through all of this, Venezuela has found a natural ally in Russia.

Moscow is not only a major political friend of Caracas but also a financier of the South American nation’s oil fields. Russia’s largest oil company, Rosneft, operates in Venezuela and has issued loans to the state-run oil company PDVSA.

In another show of support, Moscow has given Caracas a line of credit to purchase Russian arms. From Kalashnikov rifles to Sukhoi planes, the Kremlin has brokered several weapons deals with Venezuela and recently deployed two Russian bombers to the country.

The Pentagon swiftly criticized the Russian deployment of warplanes to Venezuela.

“The Venezuelan government should be focusing on providing humanitarian assistance and aid to lessen the suffering of its people and not on Russian warplanes,” Pentagon spokesman U.S. Army Col. Rob Manning said last month.

Similarly, Secretary of State Mike Pompeo condemned the Russian military flight on Twitter writing: “The Russian and Venezuelan people should see this for what it is: two corrupt governments squandering public funds, and squelching liberty and freedom while their people suffer.”

Meanwhile, the Kremlin rejected U.S. criticism, saying Pompeo was wrong and undiplomatic to condemn the deployment to Caracas.

The Pentagon’s Manning then reminded the world that the U.S. military deployed the hospital ship USNS Comfort to South America earlier this year to provide humanitarian aid to refugees fleeing the desperate conditions.

Since its deployment this summer, the Comfort, a vessel transformed from a hulking oil tanker into a 1,000-bed hospital ship, has treated more than 20,000 people along its stops in various Central and South American nations.

“Contrast this with Russia, whose approach to the man-made disaster in Venezuela is to send bomber aircraft instead of humanitarian assistance,” Manning said, knocking Moscow’s deployment.

All of these variables have made for an increasingly volatile situation in Venezuela. There are currently thousands of people protesting the Maduro regime by taking to the nation’s streets, with four being reported dead on Wednesday.

However, a lot of what happens in the near future will depend on how Maduro reacts to these recent developments, according to Marczak of the Atlantic Council.

“Part of this depends on Maduro’s next move,” he said. “Whether he seeks to escalate the situation.We have to be very attentive to what happens to U.S. diplomatic personnel in Venezuela.”

Marczak added: “The larger groundswell of support for the interim government likely mean any action that would threaten it will be some type of action from the international community.”