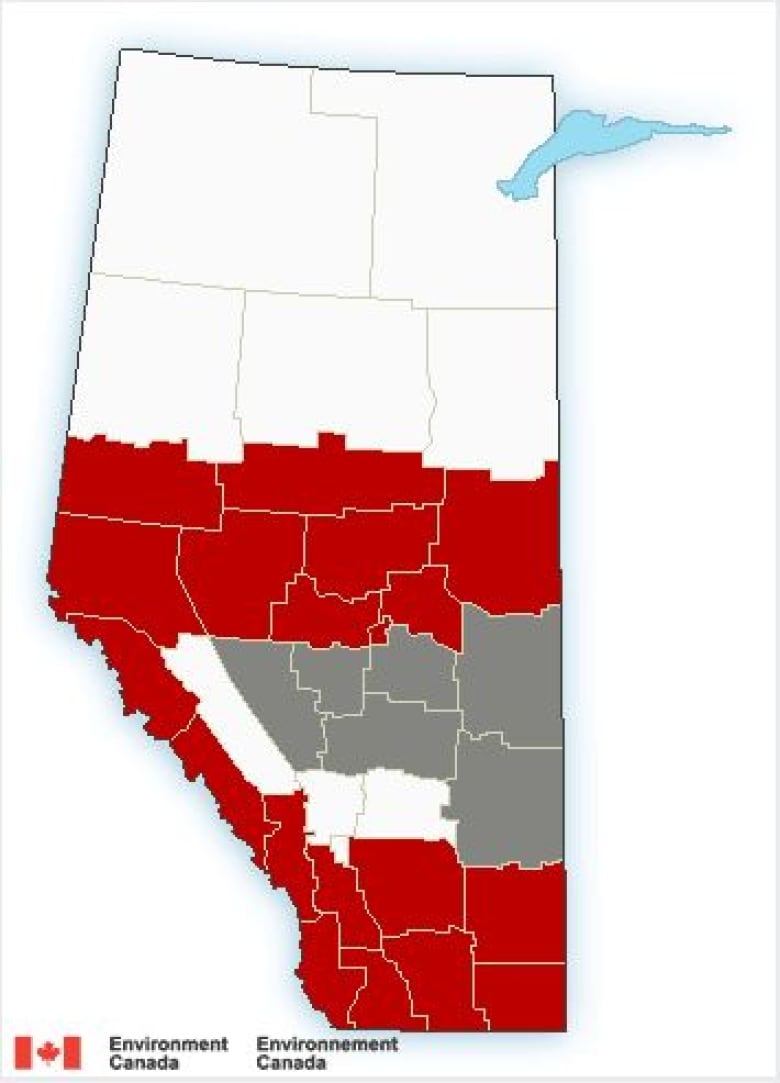 Albertans are bracing for snow and wind as a powerful storm begins to sweep across the province.

Snowfall, winter storm and wind warnings and special weather statements have been issued for communities across the province, stretching from Slave Lake to Waterton National Park.

Between 10 and 60 centimetres of snow is expected to fall in some areas before the storm tapers off Tuesday night.

Environment Canada is cautioning drivers to be prepared for blowing snow, powerful wind gusts and reduced visibility on roads and highways.

Heavy snowfall and powerful winds are expected to whip through Alberta Monday and Tuesday.

The Rockies are getting hardest hit. Along Highway 93 near Jasper and Banff, up to 60 cm of snow is expected by Tuesday morning — and drivers are being asked to consider postponing non-essential travel until conditions improve.

In areas across northeastern Alberta, up to 30 cm of snow is expected to fall.

People with breathing problems are being advised to avoid outdoor activities until conditions improve.

“Stagnant weather conditions under a ridge of high pressure are causing pollutants at the surface to build up with time,” reads the statement.

“Individuals may experience symptoms such as increased coughing, throat irritation, headaches or shortness of breath.

“The poor air quality will improve today as the winds increase throughout the day allowing the pollutants to disperse.”

Between 10 cm and 20 cm is expected in the Edmonton region, Environment Canada said in an advisory Monday.

It will be the first taste of winter for the capital region, which has enjoyed a largely snow-free November.

“Snow will begin in western Alberta this morning and spread eastward through the day, reaching the Edmonton metropolitan region by the early afternoon,” Environment Canada said.

“In addition to the snowfall, strong northerly winds, with gusts to 70 km/h, will develop over portions of eastern Alberta Monday night and continue through Tuesday.”

In addition to the snow that began Monday morning across many areas of central Alberta, freezing rain will also be an issue Monday, according to Environment Canada.

A band of freezing rain is expected to develop late this afternoon from near Drayton Valley eastward to the Saskatchewan border and slowly move northeast through the evening.

In southern Alberta, there will be powerful wind gusts to 100 kilometres per hour, Environment Canada said.

Some vehicles may be in danger of tipping over in cross-winds.

“Damage to buildings, such as to roof shingles and windows, may occur. High winds may toss loose objects or cause tree branches to break,” Environment Canada cautioned in an advisory.

Motorists are reminded to adjust their driving to the changing road conditions.

“Rapidly accumulating snow could make travel difficult over some locations. Visibility may be suddenly reduced at times in heavy snow.”