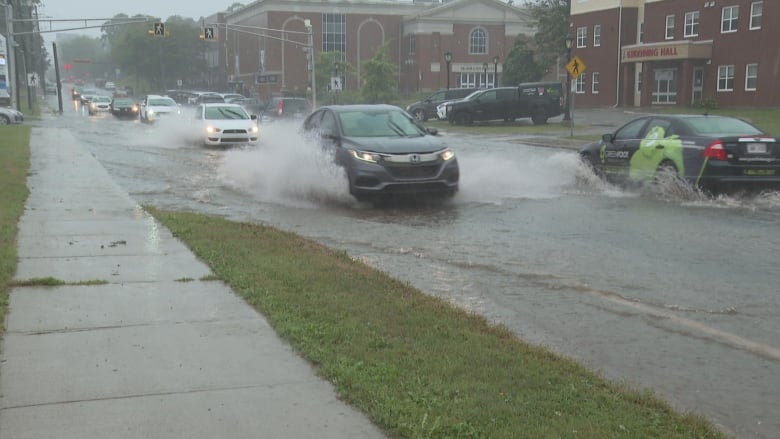 Heavy rain from the remnants of Hurricane Ida made its way over Atlantic Canada Thursday evening.

Rainfall warnings remained in place late in the afternoon for Nova Scotia and Prince Edward Island, as well as parts of New Brunswick, Newfoundland and Quebec.There have been some power outages across the region.

Earlier on Thursday, a WestJet flight from Calgary to Charlottetown had to land in Moncton, N.B., due to the heavy downpour.

Environment Canada said it expected a total rainfall of 40 to 60 millimetres throughout most of P.E.I. and Nova Scotia. Some locations in Nova Scotia could reach 100 millimetres.

But rainfall totals in P.E.I. have so far greatly exceeded expectations. CBC P.E.I. meteorologist Jay Scotland said that as of 5 p.m. AT, rain totals throughout the Island have ranged from 40 to over 90 millimetres.

Along with the heavy rain, Scotland says people should watch out for brisk easterly winds and that there’s also the risk of some isolated thunderstorms.

Wow! Mother Nature delivering more than expected as remnant moisture from <a href=”https://twitter.com/hashtag/Ida?src=hash&amp;ref_src=twsrc%5Etfw”>#Ida</a> falls over Maritimes. Unofficial rain totals in the 40-90+ mm range as of 5 p.m. ADT with more this evening before tapering off to showers overnight. Local flooding + washed out roads are big concerns. <a href=”https://t.co/VbU0rkkvZ1″>pic.twitter.com/VbU0rkkvZ1</a>

As of 2 p.m. total rainfall in Nova Scotia had risen to as high as 121 millimetres in Brier Island, according to CBC Nova Scotia and New Brunswick meteorologist Ryan Snoddon. Wind gusts for the province peaked at 85 km/h in Lunenburg.

Snoddon said there was also a slight possibility tornadoes could form.

“The steadier rain begins to taper off to light rain late this evening, then showers overnight,”  Scotland said.

“Just light showers ahead for Friday but west to northwest winds will be gusty … particularly in the morning.”

“Be prepared to lose power as local outages are possible tonight and Friday due to strong winds,” Scotland said

In southeastern New Brunswick, rainfall is expected to range from 40 to 70 millimetres. Western and southwestern Newfoundland can expect 30 to 60 millimetres, with the heaviest rains occurring Thursday night.

Heavy downpours could cause flash floods and water pooling on roads, and localized flooding in low-lying areas is possible. Visibility could also be an issue for drivers in the heaviest rain.

P.E.I. RCMP warned drivers to adjust their speed to the dangerous road conditions caused by the rainfall, and to turn on their headlights so they can be better seen.

The potential for hydroplaning is high because of the amount of water on roads across the region. When cars speed over rain-soaked road surfaces, the tire treads can stop displacing the water and start to slide across the surface instead.

“Prevent hydroplaning by scanning ahead for large puddles and reducing your speed, especially during heavy rain,” the Insurance Bureau of Canada advises on its website. “If hydroplaning happens, don’t brake — decelerate and drive straight.”