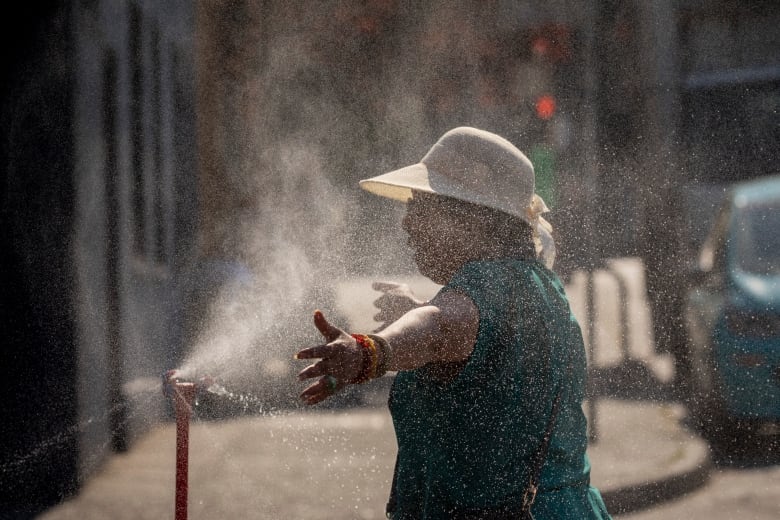 Extreme heat warnings remain in place over much of Western Canada as a historic heat wave that has shattered more than 40 all-time temperature records moves eastward.

The “heat dome” responsible for the unprecedented weather is now settling over British Columbia’s Interior and parts of Alberta.

Environment Canada warns that more records will be broken in B.C.’s Interior on Tuesday, after the village of Lytton registered the highest temperature ever recorded in Canada, 47.9 C, on Monday.

Armel Castellan, a meteorologist with the weather agency, said the number of records falling has him at a loss for words.

“There’s really no hyperbole strong enough for this,” he said. “We’re just flummoxed with how much these records are breaking.”

B.C.’s South Coast is expected to see some relief Tuesday as marine air flows in from the Juan de Fuca Strait and temperatures drop by a few degrees. But they remain unseasonably high — close to 10 C above normal temperatures for late June.

Heat that intense and lasting for several days is not only uncomfortable but life threatening, said Castellan.

“We know this is going to be a killer event,” he said.

The elderly, children, outdoor workers, homeless people and those with pre-existing medical conditions are all at greater risk of heat-related illness and death.

B.C.’s extreme temperatures led to a spike in 911 calls requiring paramedics over the weekend, according to Emergency Health Services. Between Friday and Monday morning, ambulances responded to 187 calls related to heat exhaustion and 52 related to heat stroke.

The danger is intensified by the fact that nighttime lows are not dropping to normal levels, offering no relief and recovery time from the heat.

Meteorologists watching the extreme weather event have overwhelmingly linked its cause to climate change and a warming planet.

“We know this is the tip of the iceberg when it comes to heat events,” Castellan said. “We needed to expect this and to expect more of it.”

He said the ripple effects of an extreme event like this one are “massive.” Already, hot and dry conditions have pushed the wildfire risk over Western Canada into extreme levels and an exceedingly fast snow melt has put communities at risk of flash flooding.

Those living in the areas affected by the heat wave are being advised to take certain precautions to avoid heat-related illnesses, which can sometimes be life-threatening.

Here are some tips to stay safe in extreme heat: