Harvey: Too poor to flee the hurricane 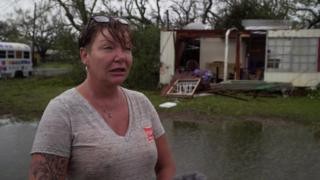 In the detritus of Hurricane Harvey a splash of red, white and blue catches the eye.

It is a rain-sodden American flag, half-hidden under the green leaves of fallen trees.

A few paces away Judie McRae, 44, is inspecting the damage to her trailer home.

Judie has lived more than half of her life here but she says this is her first hurricane. She spent it hunkered down in bed, unable to sleep.

She does not want to see another one.

“I just felt like my roof was going to come off at any minute,” she says, describing a terrible sound of “cracking and creaking” that only stopped for a few minutes of calm when the eye of the hurricane passed directly over her head.

“I was very fortunate that only two little windows got broke,” she says.

Exactly how fortunate is obvious. Three of her neighbours’ houses lie in ruins. Sheet metal has been twisted out of shape and insulation foam hangs from the trees. Books and clothes are soaking in the rain. One powder blue trailer home has caved in completely, its wooden skeleton broken and exposed.

As we examine the damage a young man arrives, agitated. He asks us if we have checked inside for the owner. We have not.

We climb into the wreckage to help search for Dan, gingerly stepping over the missing man’s possessions and clambering around his bathtub. There is no-one here.

Judie, meanwhile, is worried about two other neighbours. Both got out before the storm struck and have not yet returned to learn that their homes are destroyed.

She is particularly concerned about the elderly woman who lives two trailers along.

“She has no money and that was her home and it was already crap so…” Judie tails off as if she can think of no useful way to complete the thought, no hope to offer.

Meanwhile, down on the shore of Rockport, Robert Zbranek, 56, is trying to secure his boat to the dock after it broke free during the storm.

Alongside, a small sailing yacht is under water.

The yacht, Robert explains, was his home. He was inside when the hurricane swept over, smashing the hull. At the height of the most powerful storm in Texas since 1961, with winds blowing at 130mph (215km/h), he had to get out and scramble into his car, which he had parked behind a truck for shelter.

Even then he did not feel safe as, he says, the vehicle was lifted off the ground by the high winds but it worked.

I suggest that some people might question his sanity.

“I know I’m crazy,” he says with a smile. “It was supposed to be a category two, maybe a category three but it didn’t turn out that way. It was absolutely ridiculous. Ferocious.”

As we are chatting Robert’s friend, Craig Hack, 56, appears. He too rode out the storm on a small sailing yacht.

“I just about lost my mast,” he says, cackling when I ask how it was. “No brains” is his answer.

Both men say they stayed because they wanted to be with their boat homes and their vehicles. They agreed that many folk like them would have lost money in the storm because they did not have insurance.

Here in this coastal town that is a familiar story, of people struggling to make ends mean, let alone to thrive.

Rockport was founded as a cattle abattoir and meat-packing port after the American civil war of 1861-1865.

Named after its geology – it sits on a solid rock ledge – the town and its adjoining neighbour, Fulton, did well for many years, first on the beef trade and later thanks to fishing and shrimping.

By the time the 20th Century had dawned, a railway was bringing in tourists too.

They still come, spending time and money boating and birdwatching, with ornithologists keen to see whooping cranes and hummingbirds.

But their money does not seem to have done much for the people of the port or of its wooded suburbs.

“Hardscrabble” is the word Americans use to describe a place like Rockport. It is overwhelmingly white (88.7% at the last census in 2010) and voted decisively for Donald Trump in the 2016 presidential election.

There is some good news though. Judie thinks that Dan, the missing man, got out with relatives or friends just before the storm.

“God was with us,” she says of her own survival though as she glances around at the destruction, she sounds a little unsure.

Judie stayed, she tells me, because she had no means to leave and no place to go.

“I had some problems getting out of town, a little broke and stuff, so I had to come home and, you know, tough it out,” she says. “We’re all the working class people.

“We’re the ones who go to the restaurants and wait on you and pick up your trash and do all that work. We don’t have a lot of money.”

“Fighting for the American dream,” she adds, with a rueful laugh.