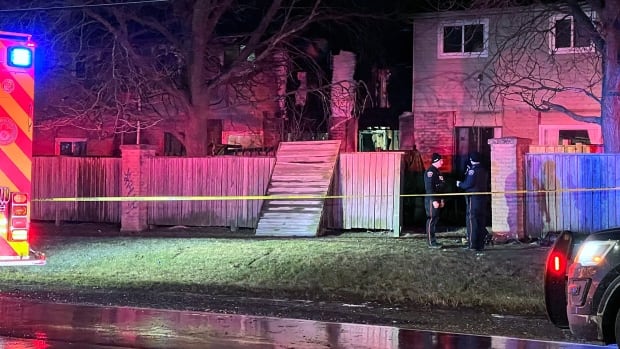 Two adults and two children are dead after a late night three-alarm fire in Hamilton on Thursday, officials say.

The Hamilton Fire Department says it received multiple calls shortly after 11 p.m. for a structure fire at 14 Derby Street, near Upper Gage Avenue and Rymal Road.

First responders say a centre unit in a row of townhouses was “fully involved” with heavy smoke and fire visible from both the front and back of the unit, Fire Chief Dave Cunliffe said in a release.

“Crews quickly initiated aggressive interior search and rescue [and] firefighting operations from both the front and rear of the unit,” said Cunliffe.

Hamilton police say a total of six people were located with the unit and transported to hospital, where two adults and two children were pronounced dead. The remaining two people remain in stable condition, police say.

Police say the Ontario Fire Marshal will be carrying the investigation into the fire, adding investigators are in the process of notifying family and next of kin about this “tragic” event.

The cost in damages of the fire, along with the cause, are not known at this time, Cunliffe says.