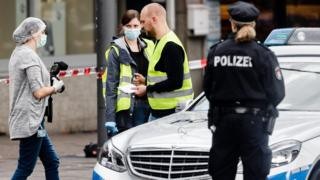 The man who killed one person and injured six in a supermarket knife attack in Hamburg was a “known Islamist”, police say.

“He was known as an Islamist but not a jihadist,” police spokesman Andy Grote said, noting that the suspect also suffered from “psychological” issues.

The man, a failed asylum seeker born in the United Arab Emirates, attacked customers at random on Friday.

Police said he acted alone and he was overpowered by passers-by.

The 26-year-old man, who police said could not be deported because he had no identification papers, was also suffering from mental health problems, officials said on Saturday.

It is not yet clear what the suspect’s motivations were.

The attack happened in the Barmbek region in the north of the city in a branch of Edeka, Germany’s largest supermarket chain.

Police said the man entered the supermarket and removed a kitchen knife, measuring around 20 cm (8 in) long, from the shelves.

“He ripped off the packaging and then suddenly brutally attacked the 50-year-old man who later died,” police spokeswoman Kathrin Hennings said.

He later wounded two other men in the supermarket before fleeing the scene.

Investigators said that although the suspect had acted alone, they had not ruled out the possibility that the man may have had accomplices.

Police praised the courage of the three men who followed the attacker after video footage emerged of passers-by using chairs as shields to corner the suspect.

Eyewitnesses said that members of the public shouted at the man in Arabic to drop the knife.

A 50-year-old woman and four men aged between 19 and 64 were stabbed, while a 35-year-old man was injured while helping overcome the suspect.

Germany has suffered a series of attacks in recent months.

Security was heightened after a man ploughed a lorry into a busy Christmas market in the heart of Berlin in December 2016.

In July 2016, a German teenager of Iranian heritage shot dead nine people in Munich before shooting himself dead.

The same month, a teenage Afghan refugee armed with an axe and a knife injured four people on a train in the southern German city of Wuerzburg before being shot dead by police.