Hall Passes, Buses, Lunch Duty: What If The Principal Could Focus On Achievement? 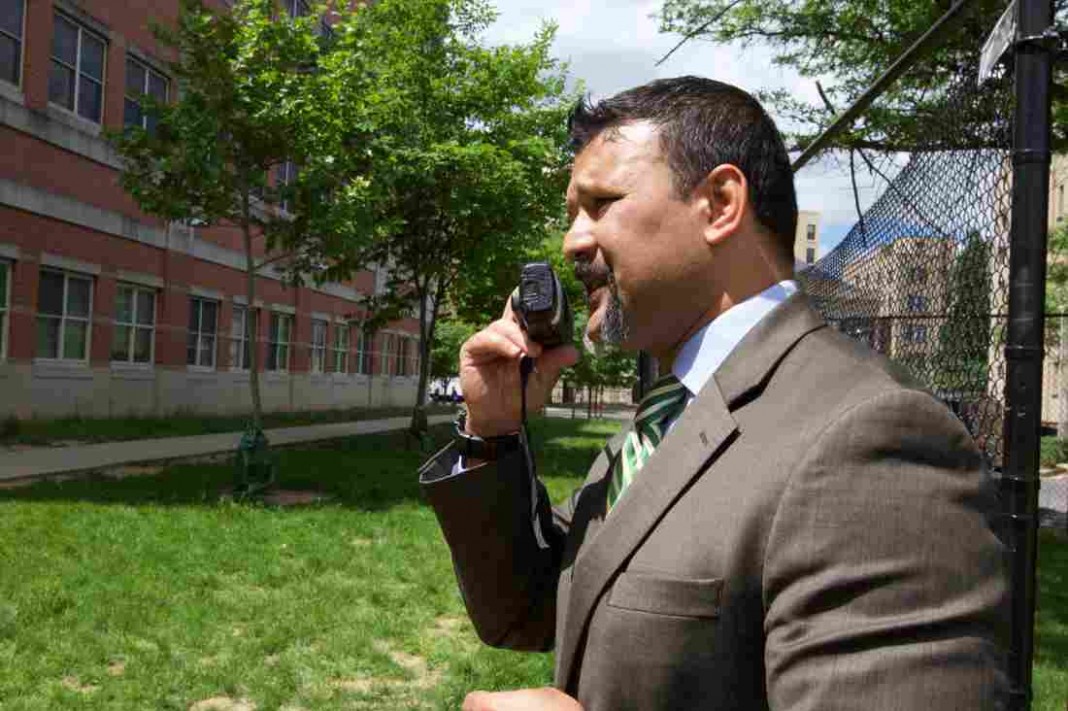 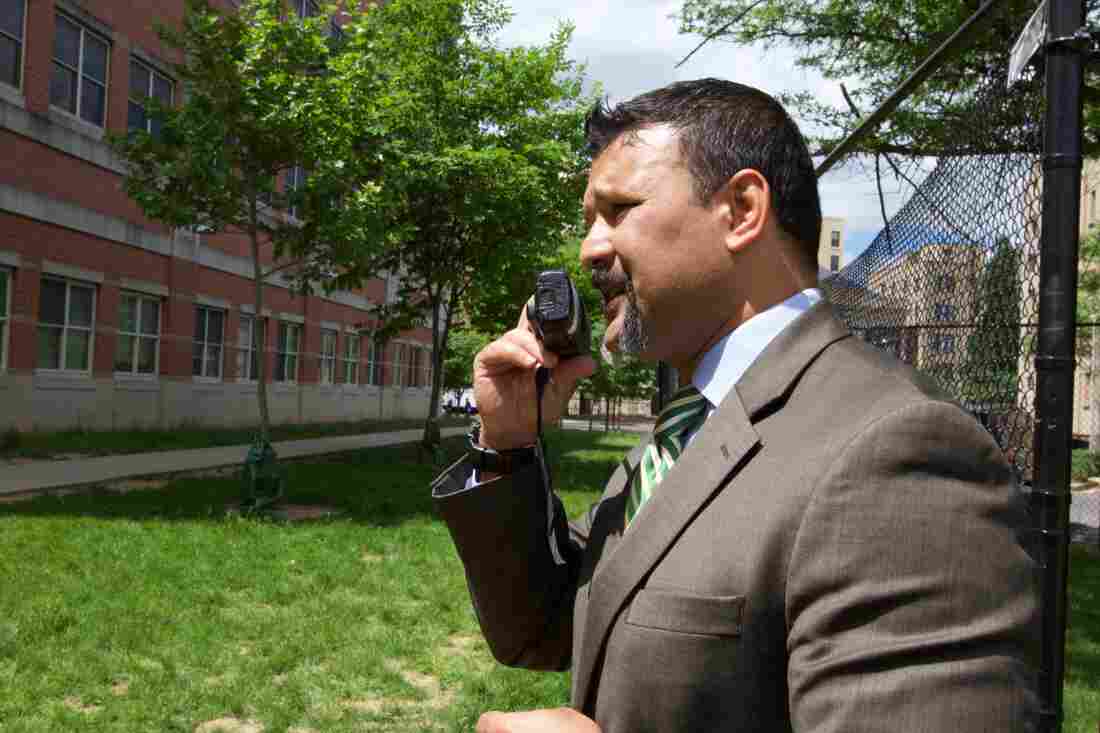 Pankaj Rayamaji speaks through his trusted walkie-talkie to a teacher inside. Rayamaji is the director of logistics and operations at Columbia Heights Education Campus in Washington, D.C. LA Johnson/NPR hide caption

Pankaj Rayamaji speaks through his trusted walkie-talkie to a teacher inside. Rayamaji is the director of logistics and operations at Columbia Heights Education Campus in Washington, D.C.

The director of school logistics and operations has a kind of sixth sense about that unique Spring affliction as he roams the hallways of Columbia Heights Education Campus, a public middle and high school in Washington, D.C.

Rayamajhi quickens his pace, walkie-talkie in hand, and turns a corner into a stairwell. Yep, senioritis. When they see him, the small group of students loitering on the stairs scatters back to class.

“Right outside Whitaker’s room there are some students here probably cutting class,” he says into his two-way radio to a security guard. “Can you please make sure these hallways are clear?”

It’s just one of a hundred fires small and large the burly Nepal-born school administrator will handle on this day, tasks that in years past would have likely been handled by the principal.

We like to think of school principals, at their best, as instructional leaders with a laser focus on boosting student achievement, school culture and academic accountability. 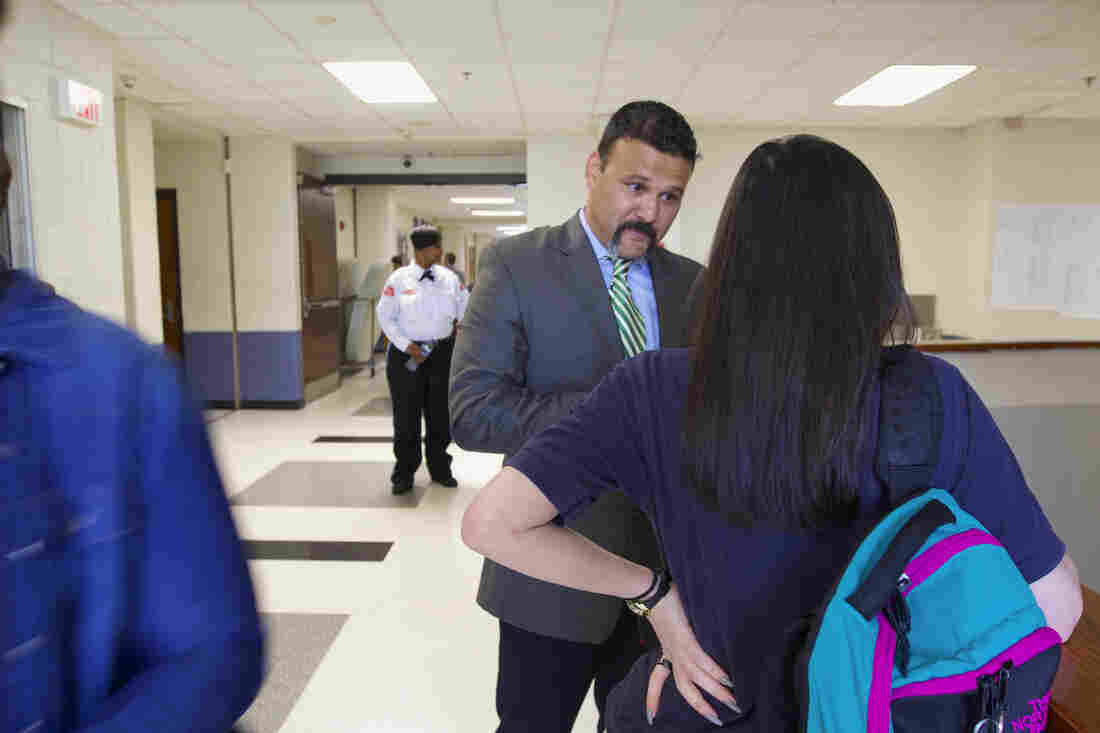 Rayamaji chats with a student after an argument between classes. LA Johnson/NPR hide caption

Rayamaji chats with a student after an argument between classes.

But too often principals and their deputies have to deal with hundreds of things that have little to do directly with teaching and learning: student discipline, school maintenance, the cafeteria, safety, transportation, paperwork — and lots more.

The District of Columbia Public Schools is taking a national lead in trying to change that by adding directors of operations and logistics. The idea is to liberate principals to focus more on teaching evaluation, planning and assessment and far less on milk, leaky faucets or security.

Rayamajhi oversees a daunting list of daily needs, from maintenance and security to procurement and HR. Part logistician, part disciplinarian as well as coach and security guard, he roams the hallways and lunch rooms, multi-tasking and talking to everyone, including the nearly 50 employees he manages.

If a teacher or teacher’s aide needs something, they come to Pankaj, as he’s known. “Be it a teacher saying, ‘Oh, my AC’s not working and my sink’s clogged’ to a student survey that needs to be done in the next two weeks,” he says.

“It’s been an immense help,” says Maria Tukeva, principal at the 1,400-student Columbia Heights Education Campus, and the city’s longest-serving principal. “I was worrying about whether there was soap in the bathroom or there was toilet paper in the bathroom.” These things are important, and urgent, Tukeva says. “However, I also have to worry about is everyone learning how to read at a high level, is everyone learning math at a high level.”

Lots of research shows the vital link between school leadership and student success. But many principals say their daily to-do lists eat up valuable time they could better use to focus on instruction, motivation and innovation.

Tukeva says having Rayamajhi has helped free her and her staff to spend more time on instructional feedback and professional development. “To do an excellent job, principals and assistant principals need to spend the majority of their time in the classrooms and with teachers and in planning curriculum,” she says, “all those things that go into a strong instructional program.” 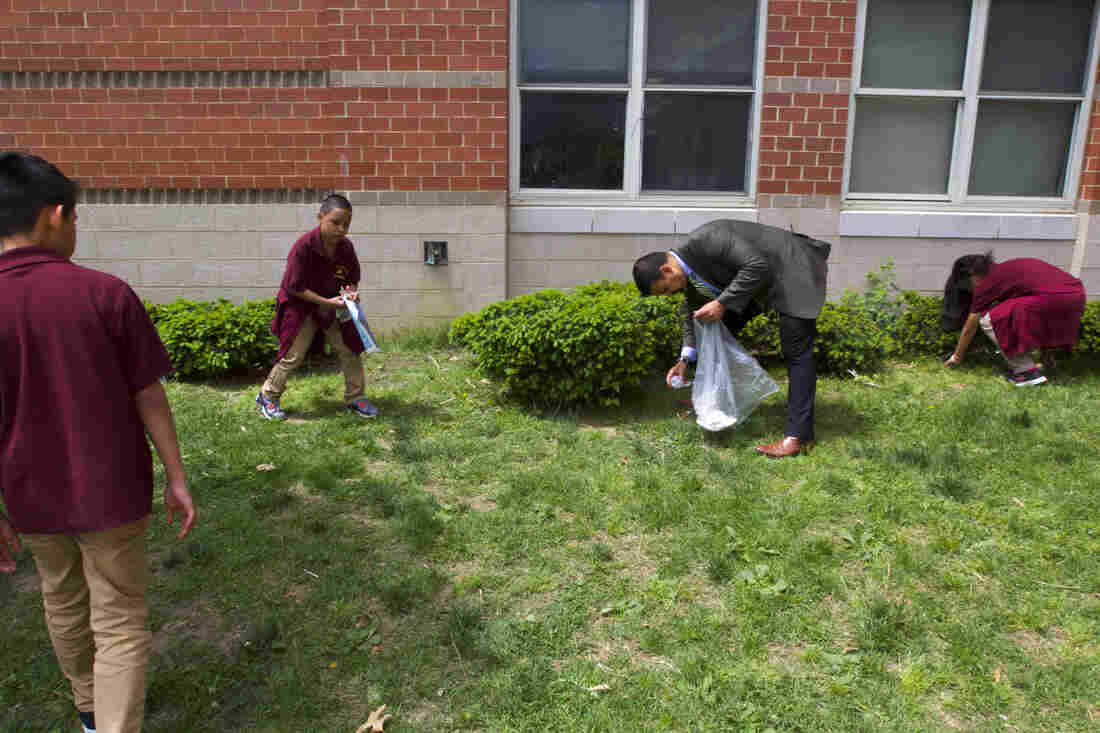 Rayamaji enlists the help of a few middle schoolers to pick up trash. “It blows in off the street,” he says. LA Johnson/NPR hide caption

Rayamaji enlists the help of a few middle schoolers to pick up trash. “It blows in off the street,” he says.

Rayamajhi has had to handle everything from rescuing a janitor stuck in a broken elevator at 11 p.m. to settling a student’s family problem by calling his uncle in Guatemala.

He also oversees the school’s five daily lunch sessions. Food for 1,400 in a small time window. What could go wrong?

“This is where the magic happens,” he says amid a cacophony of student jostling and noise. “This is organized chaos.”

On this day, he quickly confiscates a basketball from a student dribbler. “You know the rules, man,” he tells him. “Pull up your pants please, sir,” he shouts to a saggy-jeaned sophomore nearby.

Also on Rayamajhi’s to-do list: school registration. And transportation issues. Oh, and don’t forget customer service for several dozen parents who come into the office daily, as well as the regular evening and weekend events at the school. 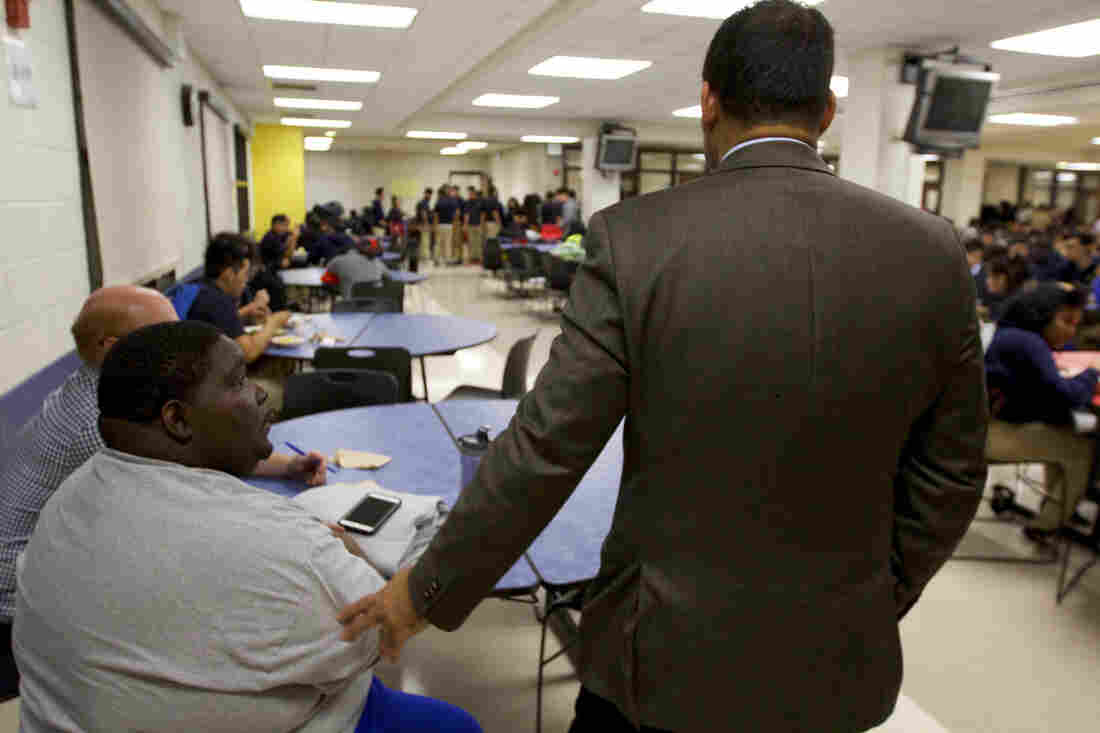 Rayamaji checks in with teachers on lunch duty. “It’s organized chaos,” he says.

“Field trips. That’s all me. I have to get the buses,” he says with a smile.

I ask him if he sees himself as a kind of the chief operating officer.

“That’s one way of putting it, yes,” he says. “It is a lot but it takes all of these off the principal and assistant principals so they can focus mostly on the classroom. Hey, where’s your uniform, man?” he asks a student not wearing the required blue top.

His day starts with a text or call at 6 a.m. from the school’s lead maintenance man, Christopher Best, giving the physical plant update and all-clear.

Best, a 12 year veteran of the place, says things improved under Rayamajhi’s stewardship. “I report directly to him. Let him know what’s going on for the day instead of burdening the principal. She’s already got her plate full,” Best says. “Going through him is a lot smoother.”

An idea whose time has come?

The duties of the American school principal have not fundamentally changed all that much in the last century. Few districts today have an operations chief to oversee and coordinate the majority of non-academic work. 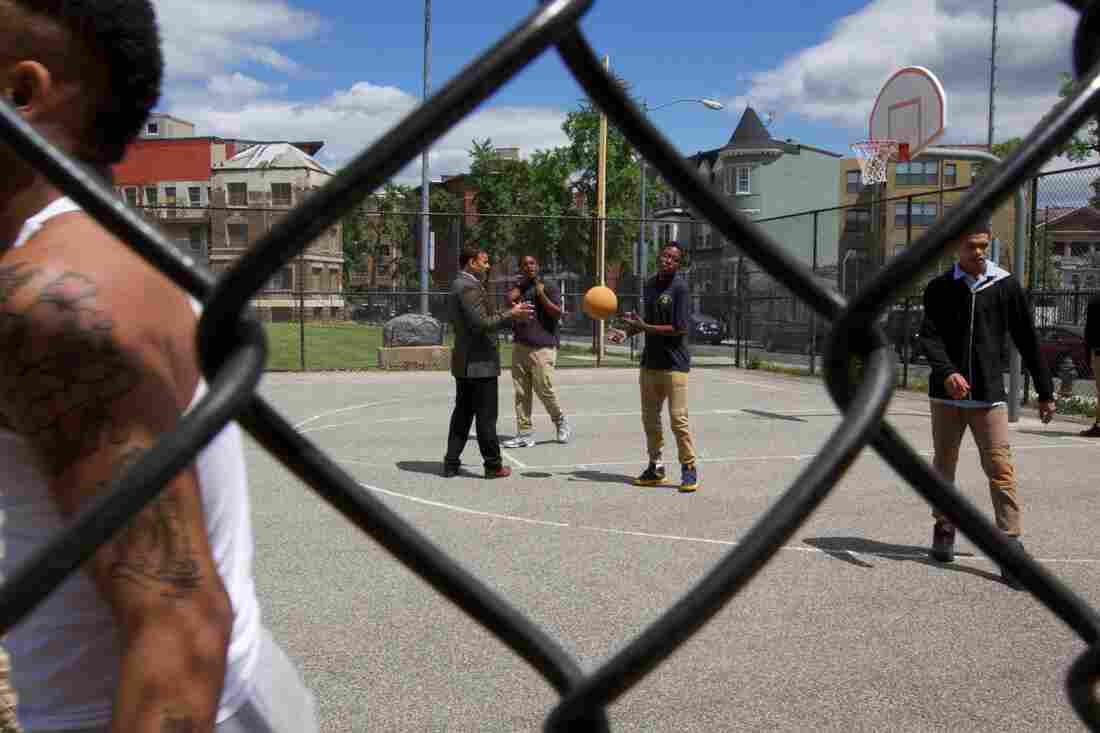 Rayamaji’s list of duties includes bringing students back in from recess.

In many traditional public schools, it still falls on the principal and assistant principal to oversee learning as well as “all of those logistical and managerial tasks that are supporting student learning,” says Bob Farrace, director of public affairs for the National Association of Secondary School Principals, or NASSP.

Farrace says NASSP does not track or have any data on which districts in the U.S. have added operations managers. But the practice is not widespread and confined mostly to large urban districts, Farrace says.

“It’s the rare principal that doesn’t need more support with administrative tasks,” he says, “but that doesn’t mean the principal is going to abdicate duties for those things.”

Farrace argues that creating an ops or logistics manager simply isn’t practical budget-wise for many districts, especially smaller and rural ones. “These are the principals that are full-time instructional leaders, and coaching baseball and driving the bus in the morning.”

Rayamaji handles a lunchroom mess until a janitor can get there. LA Johnson/NPR hide caption

The practice is common, however, in many charter schools. In fact, the D.C. schools hired Doug Hollis, a school operations expert, from a city charter school in 2014 to run a pilot project with nine schools. Hollis now manages the expanding program.

It’s not just liberation from toilets, soap, milk and buses. Columbia Heights Principal Tukeva says now she and her deputy principals no longer have to deal with streams of paperwork for hiring, procurement or registration.

Most of all, she says, they can better focus on academic and long-term planning and the vital work of observing teachers, with coaching and feed-back on classroom methods and following student assessments.

“And then working with teacher teams to see how these results should be used to adjust instruction.” 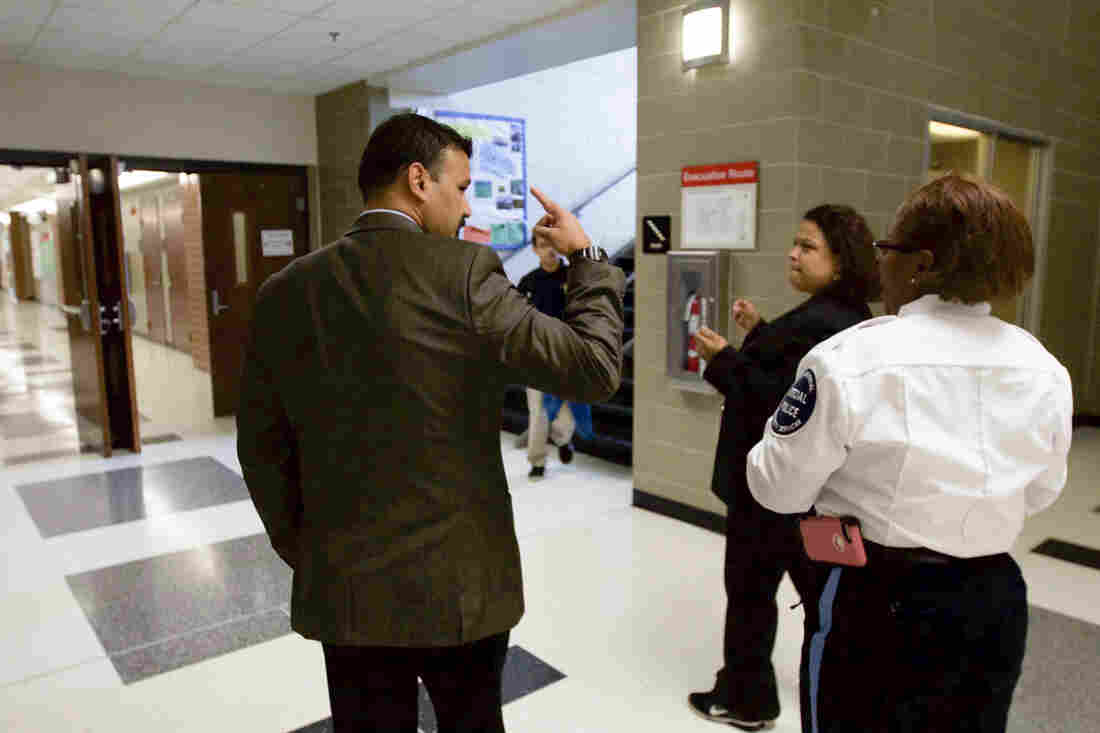 Rayamaji discusses testing logistics with a teacher and security officer.

DCPS officials say it’s too soon to tell. But the hope is the program helps boost student achievement, saves money and improves efficiency. The District aims to add more directors of operations and logistics to more of the city’s schools over the next few years.

“Corporations, they all have a director of operations, a chief operational officer. So this is definitely something that we need on a permanent basis in all schools,” Tukeva says.

Back in the hallway, Rayamajhi speaks firmly yet politely into his walkie-talkie, readying for another chaotic lunch shift.