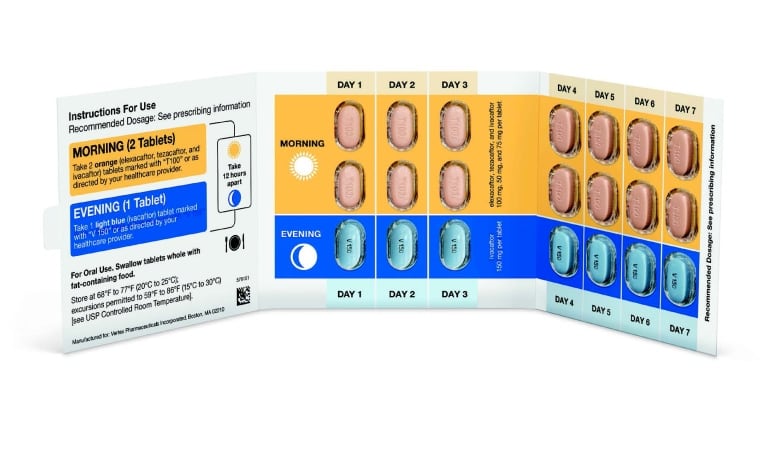 A Halifax man who has battled lung infections, digestive issues and had trouble breathing his entire life because of cystic fibrosis says he’s devastated his health insurance provider won’t cover the cost of a promising but prohibitively expensive new medication after initially approving his request.

“Trikafta is without a doubt the most groundbreaking and important thing to ever be released for cystic fibrosis patients,” said Stefan Strecko. “It’s been proven to do incredible things.”

In late June, Health Canada approved Trikafta, a medication called “transformational” by Cystic Fibrosis Canada because of its ability to significantly slow the progression of the often-fatal genetic disease, reduce hospitalizations and improve people’s ability to breathe.

“I actually had looked up the drug on my [Canada Life insurance] plan and there with a green banner, it said 100 per cent covered so I thought, ‘Amazing, this is going to change my life. This is a miracle for me,”’ said Strecko.

“I went through the process to be approved and confirmed multiple times with Canada Life that I was approved.”

After ordering a month’s worth of Trikafta, he was told he could no longer get the medication’s cost covered due to a “policy change” and a “system timing error.”

Strecko, 28, said Canada Life informed him the initial approval should not have happened because costly drugs such as Trikafta usually require a third-party company to assess the patient’s situation and determine whether they can be pre-approved for the medication — something Strecko said he was never told.

Cubic Health, the third-party health insurer that works with Canada Life, told CBC News it had no record or knowledge of Strecko being previously approved for Trikafta.

Mike Sullivan, CEO of Cubic Health, said in an email the company determined Strecko would not be covered for the drug.

He said new drugs such as Trikafta need to be evaluated by the Canadian Agency for Drugs and Technologies in Health (CADTH), a national organization that determines the clinical and cost effectiveness of prescription drugs, as well as the social, legal and ethical implications of using them.

In Trikafta’s case, CADTH’s approval is pending, so no pharmacare program in Canada covers the drug and there are few private insurers that do.

“It is a profoundly difficult situation,” Sullivan said. “There are many other conditions like this where the options are limited and are profoundly expensive, and it has become an increasingly more difficult task for employer-sponsored benefit plans to deal with the growing burden of high-cost specialty drugs.”

Dr. Meredith Chaisson, a respirologist and associate professor of medicine at Dalhousie University in Halifax, said she and other cystic fibrosis advocacy groups are working to get provincial health plans to cover Trikafta. She said the process will take time.

“We want all of our patients who are eligible to be on Trikafta,” she said in an email to CBC News. “This drug is not like any drug we have used for these patients previously. It gives our patients the hope for a future that they never dreamed they could have before.”

Strecko said Trikafta is the drug he’s been waiting for. He said he’s heard from other people in the cystic fibrosis community who are concerned they, too, will be denied coverage through private insurers.

“You always hope that you’re going to find a cure or something that’s going to save your life or allow you to have a normal life,” he said.

Brad Fedorchuk, executive vice-president for group customers at Canada Life, said the confusion over Strecko’s drug coverage has not happened to any other plan members.

“This truly was a very rare situation and is essentially a system timing error,” he wrote in an email.

He said in Strecko’s case, Canada Life’s systems didn’t have the most up-to-date information when Strecko logged on to its website and contacted its call centre.

A spokesperson for Nova Scotia’s Health Department said in an email that making Trikafta more accessible through provincial drug plans and private insurers is currently being discussed.

“The pharmacare coverage process in Nova Scotia will continue as quickly as possible once Trikafta has received a positive final recommendation for public coverage via the CADTH common drug review process,” said Kristen Lipscombe.

The preliminary CADTH review has suggested the need for a 90 per cent reduction in price before it would be covered by public and private health plans, but the final review is pending. CADTH is scheduled to meet again next week.

Halifax resident Stefan Strecko explains the steps he takes in order to absorb nutrients, which are in addition to his daily medications for cystic fibrosis. 0:44

Strecko said Canada Life has not offered any resolution.

“I pleaded with them that they should be held accountable and they should fix the situation because at that point you’re essentially toying with someone’s life,” he said.

Strecko said he might attempt to file an appeal in effort to get the cost covered under special circumstances, but he said that’s a lengthy and complicated process and is doubtful it will work.

He said he will continue to advocate for Trikafta in hopes of getting the medication into the hands of those who need it.