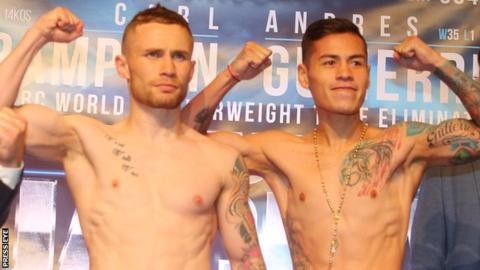 When Carl Frampton failed to make weight Friday for his featherweight world title elimination fight against Andres Gutierrez, the bout was still going to go on, without Frampton able to earn a mandatory title shot.

But after the weigh-in, Gutierrez was injured in an accident and the entire card, scheduled for Saturday at the SSE Arena in Frampton’s hometown of Belfast, Northern Ireland, was canceled.

Carl Frampton’s fight against Andres Gutierrez was canceled after it was announced that Gutierrez had been injured. Steve Marcus/Getty Images

“Cyclone Promotions and the SSE Arena regret to announce that the ‘Return of The Jackal’ event … has been cancelled due to an accident to Andres Gutierrez,” the promoter and arena said in a statement.

While they did not specify what happened to Gutierrez, a source with knowledge of the situation told ESPN that Gutierrez fell in the shower and suffered cuts.

Even before Gutierrez’s injury, there were issues with the fight when Frampton, a former junior featherweight and featherweight world titleholder, weighed 127 pounds, one over the division limit.

Had the fight taken place, Frampton — due to fight at home for the first time since a junior featherweight title defense against Chris Avalos in February 2015 — would no longer have been able to claim the position of mandatory challenger for WBC titleholder Gary Russell Jr.

Gutierrez, 24, of Mexico, came in under the limit at 125.6 pounds and would have still been able to become the mandatory challenger for Russell (28-1, 17 KOs) with a victory. Now the card is off.

“It is hoped that the event will be re-scheduled but ticket holders are advised to retain their tickets and contact point of purchase for further information. … We very much regret the inconvenience caused,” Cyclone Promotions and the SSE Arena said in their statement.

“I’d like to apologize to the fans that have got involved and shown incredible support throughout this frantic fight week, and to those that will be cheering me onto victory on Saturday night,” Frampton said before the card was called off. “Furthermore, I would like to apologize to my opponent Andres Gutierrez.”

Frampton was not necessarily going to fight Russell even if the mandatory position was still at stake for him. He has designs on two other title fights, either a third clash with rival Leo Santa Cruz or a showdown with Lee Selby of Wales.

In January in Las Vegas, Santa Cruz regained the title from Frampton by majority decision. Frampton’s fight with Gutierrez was supposed to be his first since the loss.

Gutierrez (35-1-1, 25 KOs) suffered his first defeat in 2016, losing a majority decision to former junior bantamweight world titleholder Cristian Mijares. He rebounded with a sixth-round knockout of Wallington Orobio in October to set himself up for the elimination fight with Frampton.