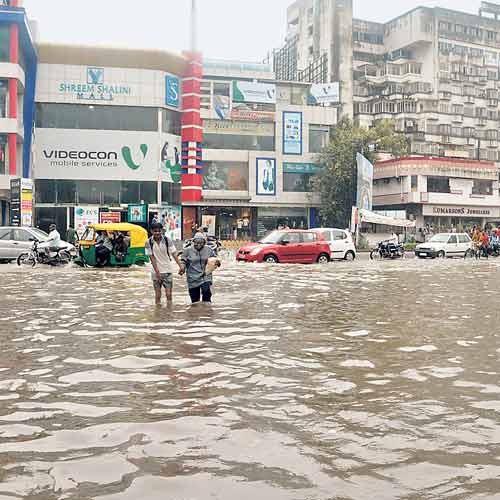 In probably the first disciplinary action for dereliction of duty with reference to ongoing flood situation in the state, Gujarat government on Thursday ordered an Executive Engineer of Surendranagar district’s Panchayat Irrigation Department to proceed on forced leave. The Executive Engineer, B B Patel, has faced the action following alleged laxity in carrying out check dam strengthening and restoration work before monsoon.

About the alleged dereliction of duty by Patel, an official release said, “Executive Engineer of Surendranagar district’s Irrigation (Panchayat) department B B Patel had shown prolonged delay in repairing of check dams. Not only that, he had shown carelessness towards his duty during ongoing flood situation in the state owing to excess rains.” “This executive engineer has shown laxity in restoration and strengthening work of ponds in Chotila taluka following flood situation.”

The release added that Patel was also found to be lax in implementing instructions of keeping sacks filled with sand ready to provide safety against flood water rushing from ponds. “As soon as the matter came to the knowledge of Chief Minister Vijay Rupani, considering the sensitivity of the issue..gave instructions to pass orders to force B B Patel to proceed on forced leave,” the release said.

Patel’s charge has been given to Executive Engineer of Irrigation Department of Surendranagar Vijay Mehta, the release further added.