Growing number of refugees arriving in Canada as unaccompanied minors 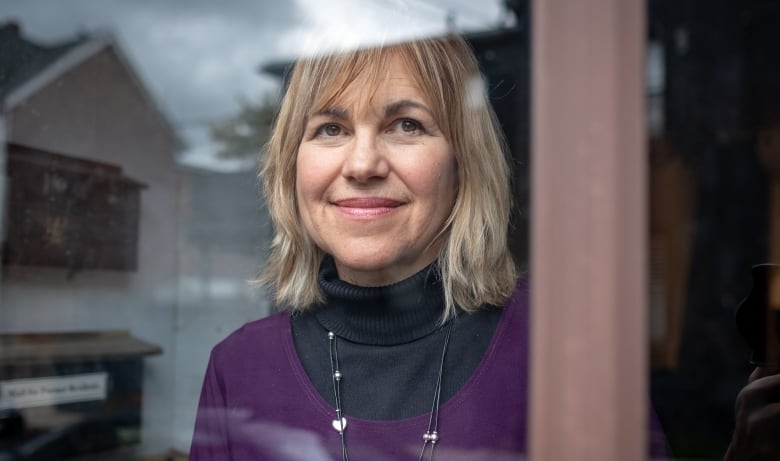 With a suitcase no bigger than a carry-on filled with what she describes as “tropical clothes,” Elisée Makola says she fled to Canada for safety.

Makola was just 15 when she left Congo, a country wracked by decades of violent conflict that has killed millions of civilians and displaced millions more. Children have been forced into prostitution, slave labour and military service for rebel groups, and she feared for her future.

“Mostly it was just being persecuted, being killed — because I’ve seen it. I’ve lived it. So I was like, if there was a chance of me escaping that, I will take that chance.”

Refugees arriving in Canada as unaccompanied minors face the dual challenge of adapting to their new environment while also being children missing their parents.

Makola says she was separated from her family amid the unrest and violence in her country. She fled to neighbouring Zambia and from there made her way to Canada.

“I don’t remember seeing them back 30 years ago, period,” she said.

They were coming from the same country, with same stories of persecution, torture, really heartbreaking.– Anne  Woolger , founder of Matthew House

According the Immigration and Refugee Board of Canada, in 2016 Canada received 287 refugee claimants who were unaccompanied minors (under the age of 18 and without a legal guardian). In 2017, that number increased to 492. (There is no reliable data available for previous years.)

Some refugees arrive in Canada under sponsorship by government or private individuals, with a whole set of supports in place starting when they are greeted at the airport. They can get help finding housing, money for food, and guidance on adjusting to life in Canada. But the system isn’t set up to help those who arrive at the border unannounced. They have no one to greet them and nowhere to stay. Many end up on the street, helpless, Woolger says. 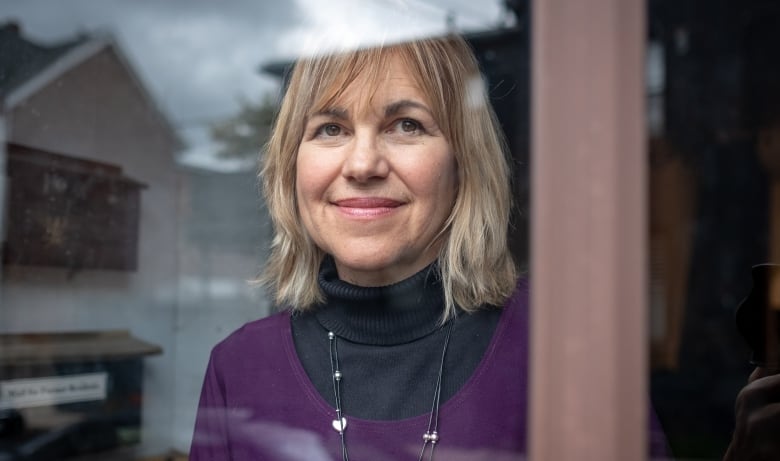 Matthew House founder Anne Woolger has been helping unaccompanied youth adjust to life alone in a new country by providing them with shelter, guidance and other resources. (Evan Mitsui/CBC)

“They were coming from the same country, with same stories of persecution, torture, really heartbreaking… [then] they were literally numbered among the homeless,” Woolger said.

That idea of leaving such vulnerable people to potential danger and exploitation led Woolger to found Matthew House in Toronto.

The home, run by paid staff and a network of volunteers, provides claimants a chance at a fresh start in a loving environment.

“[What] we want to do is create a safe home, a safe place where they could have a deep sense of belonging and a deep sense of community and just kind of like a real family,” Woolger says.

Since the first Matthew House opened in 1998, it has expanded to four houses in Toronto’s downtown.

Two of the homes are able to accommodate unaccompanied minors. Depending on how the rooms are arranged, they can take in anywhere between 12 and 14 refugee claimants.

Minors are provided a room in a fully furnished house where they can stay until they are ready to go off on their own.

Lawyers are available to help claimants prepare for their refugee hearings; they even hold mock trials, with translators provided if necessary.

If Matthew House was not there, it could be super hard for me to get where I am right now.– Khalid Sadiqi , former Matthew House resident

They also have guidance from what Woolger refers to as “house parents” — one or two volunteers who live in the home at any given time.

“They’re not telling them what to do, but they’re being resources for them, kind of helping to steer them in wise directions.” 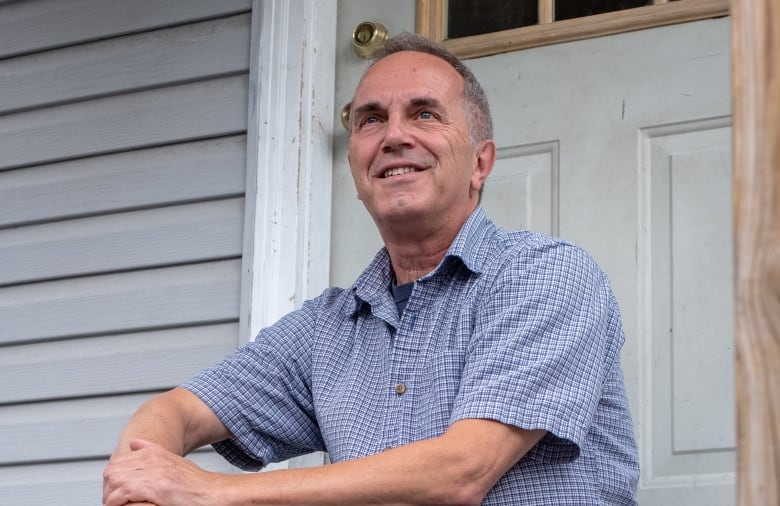 It’s something they might not otherwise get as asylum-seekers, says longtime volunteer and fill-in house parent Paul Zurbrigg.

The retired teacher of 31 years knows connecting with the kids is key and has seen the difference Matthew House is making in their lives.

“Now they are going on to higher education, they are contributing members of society,” Zurbrigg says.

‘It was not safe’

Matthew House and its residents are the only family that Khalid Sadiqi has known for the past three years.

Sadiqi says he was 17 when he left Afghanistan in 2015, as the Taliban began to make significant territorial gains across the country.

“For a guy like me back home in Afghanistan, in Kabul,” he says, “it was not safe to stay there at all.”

Sadiqi says he flew to the U.S., then took a bus from New York City to Buffalo and walked across the Rainbow Bridge in Niagara Falls into Canada.

As the youngest of eight, Sadiqi says it was a tough decision to leave.

“It can be so challenging getting out from your country. It can be your language, the culture, how people live…. If Matthew House was not there, it could be super hard for me to get where I am right now.”

Now 20, Sadiqi has graduated high school, secured a full-time job at a restaurant and has plans to go back to study technology in college. He’s also transitioned out of Matthew House into an apartment with roommates. 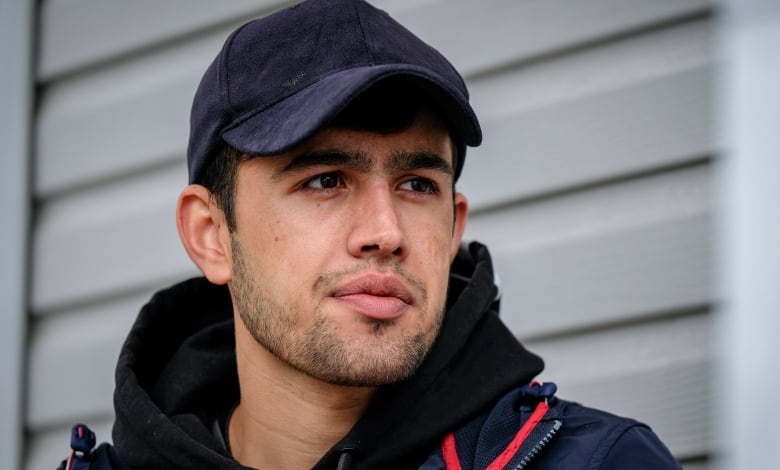 Khalid Sadiqi came to Canada from Afghanistan when he was 17. He considers the residents at Matthew House family. (Evan Mitsui/CBC)

The years without his family have been difficult, but the shared experience with people he met at Matthew House help fill the emptiness he sometimes feels, he says.

“It’s something like kind of you’re related. Like, back home you would visit your cousins’ place. Here, it feels like you have someone to visit, and that’s a great thing,” he said.

“Over the years more and more Canadians have been volunteering with us and getting involved…. Sometimes we can even send someone temporarily to someone’s house … so there is kind of a growing network.” 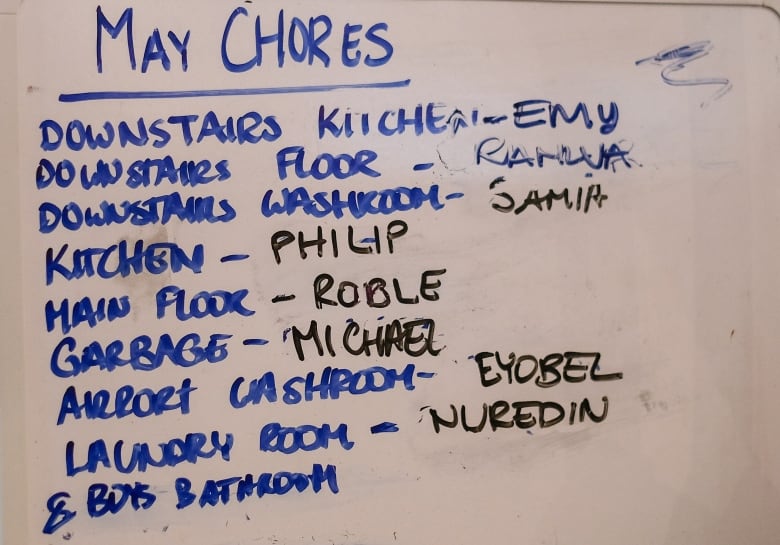 The chores board at Matthew House. (Evan Mitsui/CBC)

Woolger says she doesn’t like to turn people away. “Whenever possible, we have an extra sofa bed in our main shelter where anyone that comes to our door that is desperate uses.”

When Makola arrived from Congo, there wasn’t room for her at Matthew House. If Woolger hadn’t cleared out the office space for her, Makola would have had to spend a third night in detention.

Makola, now 23, studies construction engineering technology at George Brown College in Toronto. She says the security and support Matthew House provided her has given her a chance she otherwise wouldn’t have had.

“I think I was in a dark place and then I see a light, a little bit of light — and that was Matthew house.”

Share
Facebook
Twitter
WhatsApp
Pinterest
Linkedin
ReddIt
Email
Print
Tumblr
Telegram
Mix
VK
Digg
LINE
Viber
Naver
Previous articleYour tax bill could change in 2019. Here’s what to expect.
Next article‘I want to be put back into the air’: The life and death of a BASE jumper